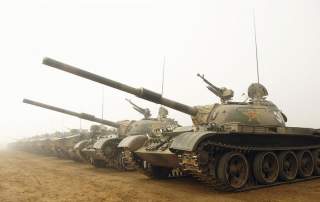 On August 14, Guan Youfei, a rear admiral in China’s People’s Liberation Army Navy, visited the Syrian capital of Damascus, escorted around the city under heavy guard. Guan’s visit reportedly included meetings with senior military officials and Russian officers, as well as pledges that the Chinese military would provide medical training for Syrian medical staff. The question is why China is increasing this engagement now.

Admiral Guan’s engagement contrasts with previous Chinese behavior during the Syrian crisis. While China has been one of the few powers to maintain an embassy in Damascus throughout the current crisis, Beijing’s engagements have been fairly limited, and mostly focused on attempts from the Chinese Ministry of Foreign Affairs to insert itself into peace negotiations and occasional expressions of concern around individual nationals who appear on the battlefield (either as hostages or fighters). The approach has been driven by a mix of motives, including Beijing’s long-standing principle of “non-interference,” aversion to what China sees as largely Western-led regime change in the guise of humanitarian intervention and a Chinese desire to insulate its growing economic interests in the Middle East from the continuing consequences of the Arab Spring.

That dynamic may now be about to change. China has started to become a participant in the many international discussions around countering terrorism, and ISIS in particular. China has participated in the Global Counterterrorism Forum and hosted sessions about terrorists’ use of the internet, while engaging in discussions at home about contributing more to the fight against ISIS. Last year, a decision was made to alter national legislation to allow Chinese security forces to deploy abroad as part of a counterterrorism effort, and China has sought to establish overseas bases in Djibouti. In neighboring Afghanistan, it has established a new sub-regional alliance between Afghanistan, Tajikistan, Pakistan and China to discuss and coordinate the fight against militancy and terrorist groups in the area. All these actions highlight the degree to which China is slowly pushing its security apparatus out into the world in a more aggressive posture than before. Seen within this light, Admiral Guan’s visit to Damascus is another piece in this puzzle, and the most ambitious yet in many ways for a power that has historically preferred to play a more standoffish role in addressing hard military questions.

Looking to the Syrian context in particular, there are two major reasons for China’s apparent decision to begin playing a more forward role in engaging in Syria. One is China’s concern at the numbers and links of Uighur militants from its restive province of Xinjiang participating in the Syrian conflict. The other is its desire for geostrategic stability in the Middle East as it seeks to consummate its “One Belt, One Road” strategy.

Of particular importance on the first count is the presence of the Turkistan Islamic Party (TIP) on the Syrian battlefield. TIP is a successor organization of sorts to the East Turkestan Islamic Movement (ETIM), a group that Beijing has blamed for violence linked to Xinjiang after 9/11. Beijing has claimed that Al Qaeda directly “funded and supported” ETIM, and while the scale of Al Qaeda’s direct support of ETIM has been widely disputed, the relationship between TIP and Al Qaeda has only grown closer since, with TIP garnering more Uighur recruits from 2009 onward and Al Qaeda leader Ayman al-Zawahiri praising Uighur contributions to the global jihad in a recent message.

Chinese suppression in Xinjiang, especially after the interethnic riots and violence in the capital, Urumqi, in July 2009, has resulted in the development of what Chinese state media has dubbed an “underground railway” of Uighurs seeking to flee the region. Some of those have ultimately found their way to Turkey and onward to Syria to fight with TIP and other jihadist groups. By 2015, TIP had established a well-documented presence on the battlefield in Syria, with the group releasing a number of videos detailing its combat role fighting alongside Jabhat al-Nusra, until recently Al Qaeda’s affiliate in Syria. (TIP does not fight alongside ISIS; its leadership has released statements in which it condemns ISIS’s activities.) TIP is increasingly showing itself to be an effective force, participating in many major fights (including the breaking of the Aleppo siege) and showing off its skill, manpower and equipment.

Historically, China has not had much economic interest in Syria, a country that prior to the civil war was more closely linked economically to its region, Iran and Russia. And more recently, China has continued to play a second-tier role. While it has had numbers of nationals join ISIS, others kidnapped and killed by the group, and the group has threatened it in some of its rhetoric, it does not appear to be much of a focus for the group. On the non-ISIS side fighting the regime, the numbers fighting alongside TIP seem to be quite substantial, whilst the group’s leadership and a core of the group continues to fight in Afghanistan. And, according to Kyrgyz authorities, this connection may have now matured into the attack that took place in late August against the Chinese embassy in Bishkek.

This threat from TIP in particular is one that is therefore becoming of much greater concern for Beijing. Yet it is not clear who is focused on fighting TIP on the ground in Syria. Western powers fighting in Syria are for the most part focused on ISIS and less focused on the groups fighting against the Assad regime, like TIP. Turkey’s historical proximity to the Uighur cause has raised concerns with Beijing; Uighurs are a people whose culture and language are very close to Turkey’s, and Uighur flags and symbols are regular features during AKP rallies. Erdogan himself has expressed support for the Uighur cause, and back in 2009, in the wake of rioting in Xinjiang that led to some two hundred deaths, he referred to Chinese activity on the ground as “a sort of genocide.” Since 2012, Uighurs have been found traveling on forged Turkish passports in transit countries like Malaysia, Indonesia and Thailand, raising questions of Turkish complicity. Leaked ISIS documents show a consistent flow of individuals through Kuala Lumpur, as well as other Southeast Asian routes to Turkey.

On the second count, Beijing faces multiple challenges in the current Middle East for its “One Belt, One Road” strategy. In brief, OBOR is Beijing’s attempt to facilitate Eurasian economic connectivity through the development of a web of infrastructure and trade routes linking China with South Asia, Central Asia, the Middle East and Europe. Key parts of this project, such as the $45 billion China-Pakistan Economic Corridor and the proposed Yiwu-Tehran high-speed rail link, according to James M. Dorsey, “illustrate the politics of its One Belt, One Road Initiative. Xi Jinping believes that he can achieve Chinese dominance through investment and interconnected infrastructure.”

The current fracturing of the Middle East as a result of the Syrian crisis, however, poses a central roadblock to China’s ability to make this vision a reality. In this context, Beijing views the United States’ approach to Syria as driven by Washington’s desire to use the civil war as a pretext to overthrow the Assad regime in order to weaken Iran’s growing power and influence in the Middle East. In contrast, Russia has been firm in its commitment to root out what it calls the “terrorist” threat there in support of the regime in Damascus, and Beijing has been impressed by the manner in which Russia’s decisive moves have had an effect that years of attrition on the battlefield failed to achieve.

So Beijing may now have arrived at the conclusion that supporting Assad and taking sides with Russia is the most viable option to effectively combat the growth of TIP. Increasing its involvement in Syria via military-to-military cooperation can also be seen in the wider context of a PLA keen to develop its overseas experience, in areas from peacekeeping to antipiracy missions to counterterrorism.

David Shambaugh eloquently argued in 2013 that China remained a “partial power” whose diplomacy “often makes it known what it is against, but rarely what it is for” and that this made its foreign policy in many regions of the world “hesitant, risk averse and narrowly self-interested.” This calculus is now changing under pressure from developments in the Middle East and Afghanistan that directly threaten core Chinese interests and are metastasizing into the very terrorist threat that China has long said it is concerned about. The response from China is relatively predictable—an outward security push. The question that remains, however, is how deeply China wishes to plunge into troubled waters to defend these interests.