China: The Next Shale-Gas Superpower? 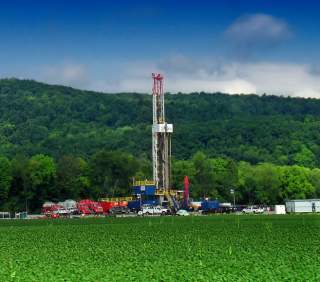 Shale gas sparked an energy revolution in the United States, helping end a reliance on imports and making the nation an energy superpower. Yet while China eyes its own shale revolution, the world’s largest energy consumer is seeing its production targets rapidly evaporate as it confronts enormous technological and market challenges.

Shale’s potential to deliver much-needed energy for China is obvious. According to the U.S. Energy Information Administration’s 2013 estimate, China has an estimated 31.6 trillion cubic meters (tcm) of technically recoverable shale gas resources, almost as much as the United States and Canada combined.

China has already invested more than a billion dollars in shale-gas exploration, completing more than eighty reservoir appraisal wells, including more than twenty horizontal wells as of 2013. Yet of the 117 billion cubic meters (bcm) of natural gas produced by China last year, only 0.2 bcm was from shale.

While domestic gas consumption has increased rapidly, production has lagged behind, hit by a lack of investment and pipeline constraints. China became a net gas importer in 2007 and since 2009, domestic gas production has expanded at an annual compound rate of 9.3 percent, well below that of demand, which has grown by 19.1 percent over the same period.

Yet while China’s State Council has identified gas as a “pillar industry” to receive government support including tax breaks and subsidies, it has been forced to cut back on its targets.

"The previous targets were more of a vague prospect, a hope. Thirty bcm is a more realistic goal," a government source told Reuters.

Of the nation’s two biggest state oil companies, China National Petroleum Corporation (CNPC) and China Petroleum Corporation (Sinopec), only the latter has a commercial shale-gas operation in production. Sinopec expects production from its Fuling field in southwest Sichuan to reach 5 bcm by 2015, doubling to 10 bcm by 2017, but few other large gas fields are set to come online.

The reduced production target may also affect the ambitions of foreign companies in China, including Anton Oilfield. Royal Dutch Shell and Hess are the only two foreign firms to have secured production-sharing contracts, with most, including ExxonMobil and BP, barely progressing beyond studies.

The supply failures have led to increased reliance on imported liquefied natural gas (LNG), with China importing 18 million tons in 2013, compared to 3.3 million in 2008. With LNG imports up 29 percent so far this year, China has quickly become the world’s third largest LNG market.

Beijing has also accepted the need for higher gas prices to encourage investment. In 2013, the NDRC introduced the first nationwide gas-price increase in three years, along with a two-tier gas-pricing structure for existing and incremental supply.

“In essence, incremental supply above 2012 contract volumes will be priced in a range from $13-$15 mmbtu [million British thermal unit]. This should reduce the losses on oil-indexed imports, and encourage the flow of capital into domestic unconventional gas exploration and development,” ANZ Research said in a September 12 report.

Sunny forecasts of China’s shale-gas potential have been dimmed by the industry’s enormous technological, environmental and market realities.

Unlike much of U.S. shale, which was launched in the flatlands of North Dakota, Pennsylvania and Texas and buried under a few hundred meters to 3,000 meters, China’s shale basins are located in mountainous and difficult terrain, with vertical depths of shale deposits ranging from 3,000 up to 8,000 meters. Tectonic complexity makes large-scale drilling, including horizontal drilling and infrastructure, such as roads and pipelines, highly challenging.

Another constraint is a lack of the necessary water required for hydraulic fracturing or fracking, which has been crucial to commercializing U.S. shale gas. In 2011, China had a renewable water resource per capita estimated at only a quarter of the world average at 2,063 square meters a year.

According to Accenture, drilling and fracking consume around 19,000 tons of water per well in the United States, which has an abundant supply of freshwater resources. Yet except for the Sichuan basin, all of China’s major shale-gas basins are located in the arid north.

Even in Sichuan, water resources are 3,040 square meters per capita a year, significantly lower than the U.S. figure of 17,000 square meters, and 80 percent of Sichuan’s water is used in agriculture. In addition, with more than 70 million inhabitants, Sichuan’s population density is around 538 persons per square kilometer, making land access for drilling potentially costly for operators.

“Although in some parts of North America urban drilling is permitted to unlock resources in gas deposits beneath cities, this may create serious health and security hazards in a country such as China with a much higher population density,” noted Fan Gao in a 2012 research paper for the Oxford Institute For Energy Studies.

Another “show stopper” could be the potential impact of intensive drilling and fracking on the health and well-being of local populations, given increased awareness of such issues, according to Gao.

In addition, the technologies used to extract U.S. shale gas “may not be a good fit in China,” according to analyst Ella Chou. Chou said in a 2013 research report:

From exploration, appraisal, development, to production, there are technological challenges at every step. In the exploration and appraisal stages, reservoir analysis, geomechanics, formation and economic evaluation are crucial. Conventional reservoir modeling and analyses are not effective for shale gas because the latter’s complex reservoir characteristics and gas flow make predicting GIP [Gas in Place], recovery, production profiles, well placement, and design fracturing programs difficult. In the development stage, companies face challenges in well design, horizontal drilling, hydraulic fracturing and well completion, and in doing it in a way that minimizes costs and environmental impact. In the production stage, companies will need to maintain production rates, reduce scaling, corrosion, and microbial contamination, and meet gas pipeline specifications. China’s complex working environment, unbalanced water sources, poor transportation and constrained well locations create additional difficulties for each and every step of shale gas development.

Chinese companies are also reliant on the horizontal drilling and fracking technologies developed by Western companies, such as Halliburton and Shell. Despite a wave of overseas merger and acquisition (M&A) activity, including CNOOC’s $15.1 billion takeover of Canada’s Nexen, Chinese companies still largely depend on foreign know-how.

Beijing assigned CNPC to lead efforts in developing indigenous technology, but according to Chou “this took away the incentive for cross-sector collaboration between national academies, other [national oil companies], and private/foreign enterprises, for developing different approaches and competing from commercialization.”

A feature of the U.S. shale-gas revolution was the role played by small- and medium-sized companies (SMEs), with 60 percent of U.S. shale-gas developments conducted by independent energy companies.

“Competition among a large number of independent energy companies has been one of the major factors that has been driving technological advancement, and has been responsible for spreading and improving best practices that have played a significant role in bringing down the costs of unconventional gas development,” states Gao.

“Although ISCs possess the most technically advanced solutions to field developments, they are often categorized as the most expensive service providers, as they maintain higher international standards than domestic companies,” Gao states.

As well as key technologies, China lacks the necessary service and equipment suppliers—such as drilling-machine manufacturers, fracking-fluid suppliers and other providers—along with the necessary skilled personnel.

Pipeline infrastructure is also another major obstacle to the industry’s growth. While the U.S. pipeline system stretches over nearly 500,000 kilometers for 722 bcm of consumption in 2012, China’s pipeline network is below 45,000 kilometers for projected consumption of 250 bcm in 2015. An additional 44,000 kilometers of new natural-gas pipelines are planned by 2015, but accessibility remains a stumbling block for new entrants.

Natural-gas pipelines are monopolized by CNPC, with three-quarters of the market, and Sinopec, with local networks operated by various local distributors. This has stymied the development of an integrated national gas-transmission grid, as well as put current operators in a strong bargaining position against potential new entrants, with a myriad of reviews and licensing requirements for those seeking to build their own pipelines.