With China on the Rise, America Must Woo India 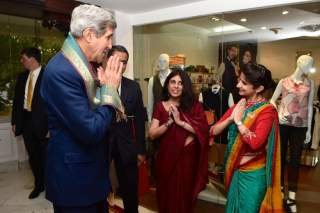 The competition between the United States, Japan and China is heating up. All three countries are aiming to woo India—a country whose uncommitted partnership will help to define Asia’s balance of power. At meetings on September 29 and September 30 between President Barack Obama and Indian prime minister Narendra Modi, Washington must reinvigorate the countries’ recently strained ties, make up ground lost to Beijing in courting New Delhi, and supplement Tokyo’s progress in drawing New Delhi closer.

There are many motivations for wooing India. It has the world’s second largest population and is projected to surpass China’s by 2028. As measured by GDP, India’s economy is the third largest in Asia. New Delhi fields the world’s second largest army, its military budget exceeds $38 billion (up 12 percent over the previous year), it is expected to become the world’s fourth largest defense spender by 2020, and it has been the world’s top arms importer since 2010. India is enhancing its power-projection capabilities, including by developing long-range nuclear missiles and manufacturing indigenous nuclear submarines and aircraft carriers. The country shares a 2,500-mile border with China and sits near critical chokepoints in the Indian Ocean, through which over 80 percent of the world’s seaborne oil passes, along with almost one third of global trade. Given its strength and location, India can shape Asia’s balance of power in favor of or against China, depending on whether it deepens its cooperation with the United States and China’s competitors.

While in many respects, India is a natural U.S. ally, its partnership should not be assumed. These democracies’ overlapping interests include avoiding a hostile Chinese rise, maintaining open sea-lanes to meet their energy needs and combatting terrorism. But New Delhi’s history of nonalignment dampens its willingness to militarily partner with other countries. After all, India seeks favorable relations with all countries to maximize its benefits from each, and Modi came to office promising significant economic development after India’s average annual growth dipped from approximately 9 percent for over seven years to under 5 percent since 2012. Given doubts about U.S. security commitments in Asia and India’s deep economic ties to China (which is New Delhi’s largest trade partner and a growing investment source), these preferences are amplified vis-à-vis anti-China coalitions. Indeed, during the recent summit between Modi and Japanese prime minister Shinzo Abe, the leaders struck economic deals, but failed to finalize pending security agreements. Perhaps Modi sought to encourage Chinese investment in his country and avoid upsetting Chinese president Xi Jinping before his scheduled India visit later this month.

However, as happened during the Cold War, when China threatened India and the United States supported India’s arch rival, Pakistan, India’s security environment can cause it to tilt to one side of a rivalry, even if it eschews formal alliances. (India’s lean towards the Soviet Union remains relevant. India backed Russia’s annexation of Crimea, and it bought most of its arms from Russia until recently.) New Delhi’s position on banding with other countries against Beijing is thus malleable—fluctuating based on, among other factors, the degree of Chinese encroachment in India’s sphere of influence. China and Japan know this, and so they compete for India’s favor. For instance, Japan committed this month to investing nearly $34 billion in India; it is involved in almost seventy infrastructure projects there (with more being negotiated); and Modi and Abe upgraded their countries’ relationship to a “special strategic” partnership. Meanwhile, despite recent Chinese-Indian standoffs, their deployment of additional troops and weapons near their contested border, China backing Pakistan and a growing Chinese presence in the Indian Ocean, Beijing and New Delhi enjoy increasingly productive ties. Between 2003 and 2012, the countries’ trade surged on average 30 percent each year. In 2007, their armies conducted their first joint military exercise, which was duplicated in 2008 and last year. Another joint exercise is planned for November. And this past February, China offered to fund Indian infrastructure development with $300 billion in loans. These trends will likely sharpen once Modi and Xi meet later this month.

While Japan and China have been successful in wooing India, the United States has not been so lucky. Unfortunately, despite having greatly improving ties with New Delhi during the George W. Bush administration, Washington has recently mismanaged the relationship. As a senior Indian diplomat complained:

“[w]e can’t get any attention from [the Obama] administration, but you can’t solve serious problems without them. They’re busy with Russia, Syria, the Middle East and Iran. But in the current circumstances, it is vital that they also pay attention to the India relationship soon, since the current drift could get much worse.”

America’s failure to appoint a new ambassador to India since the last one resigned in March is a glaring omission that is evidence of Washington’s carelessness in handling its relations with New Delhi. Furthermore, from 2005 until he was elected prime minister this past May, Modi was denied a U.S. visa because he allegedly violated religious freedoms while holding a lower office (the Indian Supreme Court found no evidence to charge him). For infrastructure collaboration with India, the United States has offered $10.6 billion—a figure dwarfed by China’s and Japan’s contributions. Last year, following a trend since at least 2011, Washington cut its aid to New Delhi by 16 percent. In April, Washington added New Delhi to a list of countries with insufficient intellectual property rights protections and considered sanctioning it. In December 2013, the United States arrested and strip-searched an Indian diplomat (Devyani Khobragade) on visa-fraud charges. India retaliated by investigating U.S. personnel in India for tax and visa compliance, withdrawing diplomatic privileges and cancelling high-level government visits. Indian media reported that the incident set back U.S.-Indian relations to their lowest point since India tested nuclear weapons in 1998.

Despite all of this, to be sure, India is not poised to unabashedly embrace China just because U.S.-Indian relations have cooled. But daylight between Washington and New Delhi does make it easier for Beijing to secure Indian neutrality regarding its rise. However, there is still hope for improving U.S.-Indian relations. The upcoming Obama-Modi summit will provide a golden opportunity for the United States to deepen its economic, military and diplomatic ties to India.

Economic ties. First, these countries should push forward the bilateral investment treaty under negotiation since 2008 and launch bilateral free-trade talks. Second, Washington and New Delhi should create a roadmap for India to join the Trans-Pacific Partnership as a second-round member; this draft free-trade agreement between the United States, Japan, Vietnam, Australia and eight other countries is expected to spark economic development through trade, job creation and investment. Finally, the United States should contribute more to India’s infrastructure development.

Military ties. Washington can greatly strengthen New Delhi’s military power. First, the United States should elevate India from an arms buyer to a weapons co-developer. New Delhi is eager to reduce its reliance on imported military equipment, as evidenced by its recently increasing the foreign-investment cap in its indigenous defense sector. Second, even if it is not included, the United States should support India’s burgeoning security ties to China’s competitors, such as Japan and Vietnam, both of which have territorial disputes with China and share India’s interest in deterring Chinese aggression. Potential defense cooperation includes expanded arms sales, intelligence sharing, joint maritime patrols and military training.

Diplomatic ties. First and foremost, the United States should name a new ambassador to India. The appointee must have sufficient clout to focus the White House’s attention on Indian issues, even when Washington is distracted by crises elsewhere in the world. Second, people-to-people exchanges have greatly improved U.S.-Indian relations. But each year, scores of highly educated Indians seeking H-1B visas to work temporarily in the United States, primarily in science, technology, engineering and mathematics, are rejected due to a quota on such visas (which India views as a market entry barrier). The United States should increase that cap to foster goodwill in India, bring more Indians to the United States, and strengthen the Indian and American economies. Finally, India believes that it is not respected internationally, as illustrated by the Khobragade incident. The United States must therefore demonstrate that it views India as an equal. For instance, Obama should support India’s bid for a permanent seat on the UN Security Council. While adding another veto-wielding member to that body would make it less effective, China will not offer its required consent to India. Washington can thus win favor with New Delhi while not actually having to deal with a new permanent Security Council member, because Beijing will block the move regardless, and thus alienate New Delhi.

At least in the short term, while China’s aggression is focused on the East and South China Seas, India will continue its policies of strategic autonomy and playing its suitors off of each other to maximize concessions from each. But in the longer run, China will likely accelerate its current push into India’s backyard. For example, controlling the East and South China Seas is insufficient for Beijing because the flow of oil and trade to China through those waters can be blocked by New Delhi at chokepoints in the Indian Ocean. Accordingly, India may eventually be willing to oppose China alongside the United States.