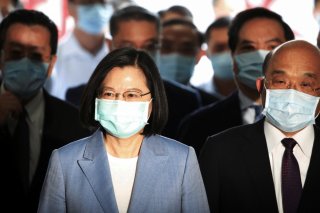 The recent adoption by China of a more threatening posture in the Taiwan Strait, with almost daily intrusions by People’s Liberation Army aircraft and warmongering editorials in Communist tabloids, has caused a defiant, rally-around-the-flag response within the pro-Democratic Progressive Party (DPP) camp. Amid these developments, Taiwan’s largest opposition party, the Kuomintang (KMT), has struggled to find its footing and raison d’être, resulting in a series of initiatives that suggest aimlessness and disunity.

Following eight years of party-to-party rapprochement between the KMT and the Chinese Communist Party during the Ma Ying-jeou administration (2008–2016), culminating in a historic summit between Ma and his Chinese counterpart, CCP General Secretary Xi Jinping, in Singapore in November 2015, the KMT was twice defeated in the 2016 and 2020 presidential elections. In both, the party fielded candidates who proposed a further deepening of ties with China despite the fact that trends within Taiwanese society, epitomized by the student-led Sunflower Movement in 2014, indicated a growing sense of alarm over developments in China and their potential impact on Taiwan’s democracy. While the KMT switched out its initial, pro-China candidate, Hung Hsiu-chu, at the eleventh hour before the 2016 elections, replacing her with the more moderate Eric Chu, it nevertheless held on to an ideology that favored a more cordial relationship with China and opposed any move toward de jure independence for Taiwan. As President Tsai Ing-wen weathered pressure from China and succeeded in securing re-election in January 2020 with a record-breaking number of votes, KMT stalwarts—Ma, former premier Jiang Yi-huah and former National Security Council secretary-general Su Chi (the author of the so-called “1992 consensus”) among them—accused the DPP administration of risking war in the Taiwan Strait, leaning too far toward the United States, and eroding Taiwan’s democracy. Tellingly, very rarely, if ever, did such political figures criticize Beijing for elevating tensions in the Taiwan Strait through an intensification of PLA operations and martial rhetoric.

Meanwhile, with the old guard in the KMT receding into the background, new voices struggled to steer the ship in a new direction, one which could make the party more current and viable within Taiwan’s democratic environment. In March 2020, the forty-eight-year-old Johnny Chiang assumed leadership of the party, inheriting machinery that already was showing signs of schizophrenia. This was a party that could simultaneously put on its “at-large” list of legislators a retired lieutenant general, Wu Sz-huai, who in 2016 was caught on camera singing the Chinese national anthem at an event in Beijing and, in January 2019, officially stated, following an address by Xi, that the “one country, two systems” formula was unacceptable to Taiwan.

Long seen as an ostensible partner of the CCP for the “reunification” of Taiwan, the KMT has been unable, and perhaps unwilling, to deliver, largely due to the democratic forces it has to contend with. In recent years, influential CCP thinkers have openly complained that the KMT is no longer committed to unification, a view which is at odds with the CCP’s official propaganda to the effect that only a very small number of “separatists” in the DPP, along with “foreign forces,” oppose unification. Such frustrations became all the more vocal when, seeking chairmanship of the KMT, Chiang began questioning the applicability of the “1992 consensus,” which for Beijing has been sine qua non for the resumption of dialogue across the Taiwan Strait. Later on, Chiang also called on CCTV to apologize for stating in a political talk show that a KMT envoy expected to attend the 12th Straits Forum in Xiamen would journey to China to “sue for peace,” eventually canceling official participation by the KMT at the annual forum.

Chiang’s transgression did not go well with Beijing or with the more conservative and pro-CCP factions within the KMT. Chief among them is the Huang Fu Hsing, a powerful faction comprising retired military personnel that rallied behind Han Kuo-yu, the party’s Beijing-friendly candidate in the 2020 elections. Earlier this year, the leader of the Huang Fu-hsing faction was overheard saying that he would rather Taiwan be taken over by the CCP than for the DPP to win another general election in 2024—a comment that prompted accusations of “treason” by a younger member, who was subsequently expelled due to his defiance.

Such forces, which have allies within the KMT caucus at the Legislative Yuan, appear to be mobilizing to sideline Chiang, whom they presumably hope to see replaced in next year’s party elections. On a number of occasions, since he assumed the chairmanship, party officials and legislators have acted without his consent, which caused both embarrassment for Chiang while giving the impression that the party is out of control.

This combination of contradictory forces came to a head earlier this month when the KMT proposed two bills in parliament calling on the Tsai administration to actively pursue the restoration of formal diplomatic ties between Washington and Taipei, and request U.S. official assistance to defend Taiwan against Chinese aggression. The two bills passed, leaving the KMT in the odd position of having proposed legislation that went beyond what the “separatist” DPP has been willing to aim for. The KMT, opposed to Taiwan independence and an alleged “friend” of Beijing, was calling for two ideas which are anathema to Beijing—dual recognition and more overt U.S. security guarantees toward Taiwan, the latter an invitation for Washington to “interfere,” as Beijing sees it, in China’s “internal affairs.” No sooner had the bills been passed in the legislature than the dependably strident Global Times warned that “Judging from such a loser mentality of the KMT, it is clear that we must not count on them for future cross-Straits peace and national reunification. On the upside, those politicians’ treachery have [sic] helped the Chinese mainland [sic] see clearly what is happening on the island. We must no longer hold any more illusions. The only way forward is for the mainland to fully prepare itself for war and to give Taiwan secessionist forces a decisive punishment at any time. As the secessionist forces’ arrogance continues to swell, the historical turning point is getting closer.”

There was both more, and less, to this gambit than it appears. The KMT has not, all of a sudden, become a proponent of independence or a two-China solution. The move by the caucus was intended to embarrass top officials in the Tsai administration, whose policy, as was recently affirmed by Taiwan’s foreign minister, Joseph Wu, it is not, at this point, to seek official recognition of Taiwan by the United States. The chief aim of this effort by a party which, the same month, will dispatch former chairwoman Hung Hsiu-chu to attend a youth forum in China, was conceivably to cause a split within the DPP between Tsai’s go-slow approach on matters of independence and “deep green” elements who have long accused Tsai of betraying what they regard as a mandate to declare de jure independence. Faced with a maximalist position, one that, ironically, was initiated by the KMT, the Tsai administration will be subjected to greater pressure to move closer to such a policy, especially as various factions within the DPP are already positioning themselves ahead of the 2022 local elections and the 2024 general elections, in which the two-term Tsai, under the constitution, cannot run again.

The KMT, therefore, was willing to forsake its reputation with the CCP by tabling bills which, just a few years ago it would never have dared to even consider. Strangely enough, the bills in question are not outlandish in what they are proposing, and can easily be reconciled with what many of the younger party members are probably thinking: recognition of the Republic of China and a greater role for the United States in deterring an attack by China. In other words, while the idea behind the two bills may have been more for domestic politics than foreign policy, it nevertheless approaches the point where Taiwan independence (taidu) and ROC independence (huadu) intersect. And if the KMT is to have a shot at winning a major election again, then this is the kind of policy that it will have to propose to the Taiwanese polity.

There is a civil war of sorts going on inside the KMT at the moment, and that is what has made the bill proposal possible and why the two possible motivations behind it can exist simultaneously. If Chiang or likeminded reformists prevail, it is not inconceivable that the KMT will gradually move toward the adoption of an official policy that is more closely aligned with Tsai’s; conversely, if the old guard and conservative forces like the influential Huang Fu-hsing gain ground (for example, Han Kuo-yu assuming chairmanship), then there could be a return to party policy that is more aligned with Beijing and, as a result, a KMT that will continue to be defeated in general elections.

Whatever the motive behind the KMT’s gambit, it is nevertheless risky behavior at a time when tensions in the Taiwan Strait are at an all-time high. Global Times aside, Chinese commentators have become more certain in recent years that the goal of “peaceful” unification will never be realized, and that only the use of force can resolve the matter. With the two bills and the complicated relationship that the CCP has had with the KMT in recent years, the hawks in Beijing are running out of patience, and many among them risk concluding that, having lost its only partner in Taiwan, patiently waiting for Taiwan’s democracy to yield a leadership that is willing to negotiate the terms of surrender with Beijing is no longer in option. What the KMT has proposed with the two bills is something that, should the Tsai administration, for whatever reason, decide to adopt—or even approach—could, for Beijing, serve as “justification,” under the “Anti-Secession Law” of 2005, for military escalation. It is highly unlikely that the Tsai government, which since 2016 has shown great pragmatism, will move in that direction. But the seed remains, and who knows what it may foster should it succeed in sparking another civil war in the lead-up to 2024, this time within the DPP camp?