Is China Trying to Turn the Tiananmen Square Massacre into Fake News? 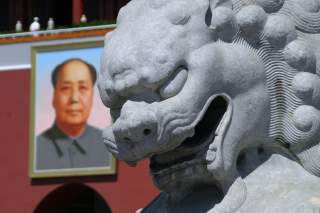 George Orwell, who understood the close connection between control of messaging and the shaping of history, wrote in his classic work 1984 that “who controls the past controls the future.” Never has this been truer than in the age of the internet. The communist leaders in Beijing, spiritual soul mates of Orwell’s shadowy but omnipotent “Big Brother,” realize the critical need to rewrite history for ideological purposes.

Thus, it was reported as another anniversary of the June 4, 1989, Tiananmen Square Massacre was commemorated—perhaps not surprisingly—that Facebook had made a big bow to Big Brother. The online social-media and social-networking service “mistakenly” censored content paying tribute to the victims of Tiananmen Square, according to the Hong Kong Free Press. The Daily Caller reported that “Fung Ka-keung, the chief executive of Hong Kong Professional Teachers’ Union, submitted a customized frame commemorating the violent protests to Facebook on Friday for review. Roughly 24 hours later, Fung said that the company rejected the design because it doesn’t meet official policies.” Facebook originally claimed that the virtual frame “belittles, threatens, or attacks a particular person, legal entity, nationality or group,” according to the Hong Kong Free Press.

Facebook CEO Mark Zuckerberg has been prodigiously wooing the leadership in Beijing, seeking reentry into the large and growing Chinese market for his company, which was banned from the Chinese mainland after political disturbances took place in 2009. Zuckerberg’s efforts have included multiple visits to China, a meeting with China’s propaganda chief, and the reported studying of a book of quotations of Chinese leader Xi Jinping. The New York Times even reported last November that “the social network has quietly developed software to suppress posts from appearing in people’s news feeds in specific geographic areas, according to three current and former Facebook employees, who asked for anonymity because the tool is confidential. The feature was created to help Facebook get into China . . . Mr. Zuckerberg has supported and defended the effort, these people added.”

Zuckerberg appears fully cognizant of the fact that, as George Orwell noted, “Big Brother is Watching You” as he seeks to break back into the Chinese market. CNBC News had reported, after the U.S. election in November that Facebook had “responded to the spread of fake articles during the (U.S.) election, saying it takes the problem ‘very seriously’ and pledged it would root out misinformation in people’s News Feed and trending topics.” So so-called “fake news” is a concern for the American people, but it is okay to block the Chinese people’s access to historic information that directly impacts their political awareness?

The success of the Beijing propaganda leaders in spoon-feeding “fake news” to the people of China is no more apparent than in the lack of a collective memory of what Time magazine referred to as “one of the most influential images of all time”—the photograph of “Tank Man.” Time noted that “on the morning of June 5, 1989, (Associated Press) photographer Jeff Widener was perched on a sixth-floor balcony of the Beijing Hotel. It was the day after the Tiananmen Square massacre, when Chinese troops attacked pro-democracy demonstrators camped on the plaza . . . As he photographed bloody victims, passersby on bicycles and the occasional scorched bus, a column of tanks began rolling out of the plaza. Widener lined up his lens just as a man carrying shopping bags stepped in front of the war machines, waving his arms and refusing to move. The tanks tried to go around the man, but he stepped back into their path, climbing atop one briefly. Widener assumed the man would be killed, but the tanks held their fire. Eventually the man was whisked away, but not before Widener immortalized his singular act of resistance.”

Widener later commenting in 2014 on the photo to Mother Jones said “it’s a bit like David and Goliath . . . it’s so overpowering—it’s like an ant against an elephant . . . Many people would like to know who he is, and personally, my feeling is that it’s kind of neat that we don’t know who he is, because he‘s sort of a representative of the unknown soldier.” To this day the identity of Tank Man and his ultimate fate remain unknown.

Tank Man was certainly one of the most compelling photographs to come out of twentieth-century China. Yet, according to a story that made the rounds among congressional staff, a number of years later Democratic congressional leader Nancy Pelosi visited China with a copy of the iconic photograph. However, when she asked Chinese students in a meeting to identify the “Tank Man” figure, the students were clueless, thinking it was a photograph from Burma, Thailand or somewhere else overseas.

Interviews conducted by an Associated Press journalist on the June 4, 2014, anniversary date confirmed that Chinese students have learned virtually nothing of the Tiananmen events from their teachers or textbooks. Information on this seminal event in modern Chinese history has been successfully censored by Beijing authorities. It is as if American students had no awareness of such historic events as the Boston Massacre or Kent State. Big Brother has successfully whitewashed Chinese history.

Beijing has even sought to use its new-found international clout and its leadership position in the UN system to obliterate the memory of Tank Man and Tiananmen Square from the international community beyond China’s borders. Former Tiananmen activist Yang Jianli and his human-rights organization, Initiatives for China, have been pushing for the United Nations Educational, Scientific and Cultural Organization Memory of the World Register to accept images and a video of Tank Man. Voice of America, in a June 4, 2016, report, quoted Yang as stating that “China, of course, is definitely going to push back (on the Tank Man nomination). China has tremendous influence with the U.N.”

A final decision from the UNESCO director-general on Tank Man is expected in the near future. Hopefully UNESCO will not succumb to fake news and will make an intellectually honest decision. But Big Brother in Beijing—one of the five permanent members of the UN Security Council—will be watching.

Dennis P. Halpin, a former adviser on Asian issues to the House Foreign Affairs Committee, is a visiting scholar at the U.S.-Korea Institute (SAIS).

Image: A statue and a photo of Mao Zedong. Pixabay