China vs. America in the Sky: A Stealth-Fighter Showdown Is Brewing 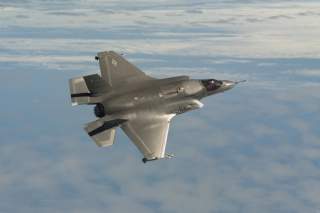 China’s new stealth fighters might one day be able to match their American equivalents in battle, Pentagon and industry officials fear. Indeed, China is showing off its latest Shenyang J-31 stealth fighter at the Zhuhai air show in the Guangdong province. To meet the challenge, the Pentagon needs to continue to buy the F-35 and start developing a future fighter to counter the rising threat.

“The J-31—along with the J-20 [the other Chinese stealth fighter]—is a tangible demonstration of the efforts made by China to counter the significant advantage the U.S. has with the [Lockheed Martin] F-22 and F-35,” said one senior U.S. military official with extensive experience with so-called fifth-generation fighters. “They recognize that fourth-gen airplanes [like the F-15, F-16, F/A-18, Russian Su-27 and so on] are quickly becoming obsolete. The price of admission to a fifth-gen war is a fifth-gen airplane and they get that.”

Indeed some senior U.S. aviators believe that the J-31—which is thought by many U.S. military and industry officials to be based on stolen F-22 and F-35 technology—will eventually be the equal of the American fighters. “I think they’ll eventually be on par with our fifth-gen jets—as they should be, because industrial espionage is alive and well,” as one senior pilot familiar with the F-35 told USNI News.

(You May Also Like: Will the F-35 Dominate the Skies?)

Even if the J-31 doesn’t sit at 100 percent parity with the F-22 and F-35, it might not matter, because those Chinese aircraft might be able to do enough damage to the U.S. military to make it too expensive to fight. “I think we can probably keep a slight advantage for quite some time, but a slight advantage means significant losses and less of a deterrent,” said one senior Air Force official. “Lets pretend the F-22 confronts current air-to-air threats outside of a SAM [surface-to-air missile] environment and has a 30 to one kill ratio today versus a [Sukhoi] Su-30 or [Shenyang] J-11. When the J-20 and J-31 come around, even a three to one kill ratio advantage becomes costly.”

China is developing the J-20 and J-31 because the F-22 and F-35 are so superior to existing fighters. The Chinese cannot afford to lose thirty jets in exchange for killing a single F-22 any more than the U.S. could if the situation were reversed. “Our competitors know the current reality and are working very hard to avoid the wide gap we have created by investing in those planes,” the senior military official said. “They represent their attempt and creating parity in the skies.”

(You May Also Like: The 5 Best US Fighter Aircraft of All Time)

The senior military official said the very fact that China is developing aircraft like the J-20 and J-31 shows that the Pentagon needs the F-35. “The J-31 should make anyone who questions the need for the F-35 to rethink their logic,” the official said. “Regardless of whatever criticisms you have heard about the Raptor and the Lightning, they are incredible machines that are insanely superior by virtually every metric to anything else flying in the world. They may be complex, expensive and still immature, but they are a quantum leap over every other fighter in our arsenal.”

The senior military official said, however, that while the J-31 looks impressive, there is a lot the United States does not know about its capabilities. “Anyone can make a plane that flies fast and looks stealthy,” he said. “The J-31 looks gorgeous. Aside from the fact it’s an obvious rip-off of the F-35.”

It takes a very long time to develop a stealth fighter—much of that is not because of the aircraft itself, but rather the radar, other sensors and cockpit systems. Developing and perfecting those technologies takes a long time. Further, it takes a long time to perfect manufacturing techniques for an extremely complex warplane like the F-22 or F-35. “The most impressive and important qualities of our fifth-gen fleet are what is on the inside—fused sensors and information dominance,” the official said. “We didn’t develop those over night. It takes a lot of time to get where we are today, which is why we continue to preserve our advantage.”

China will eventually perfect the J-20 and J-31, however—it is just a matter of time. “They are going get there one day, make no mistake,” the senior official said. “It won’t be tomorrow or the next day, but the fact this place is debuting now should tell you something about China’s commitment.”

But the Pentagon is not resting on its laurels either. The Air Force and Navy are already working on plans for next-generation fighters to restore America’s edge. The Air Force program is called F-X and is aimed at replacing the ultra-high-end F-22 with a new air superiority fighter. Meanwhile, the Navy is working on the F/A-XX strike fighter to replace its Boeing F/A-18E/F Super Hornet. “F-X will return it to an unfair advantage... Hopefully deterring any potential adversary from using a military option,” the senior Air Force official said. A more ambitious effort than the Navy’s comparatively modest F/A-XX vision, the new Air Force fighter won’t be aimed at China’s current crop of stealth fighters, but rather their successors. “F-X is more for their follow on to the J-20 and 31 and to a greater extent to operate in the nasty, future surface-to-air-missile engagement zones.”