China vs. Philippines in South China Sea: The Only Thing You Need to Know 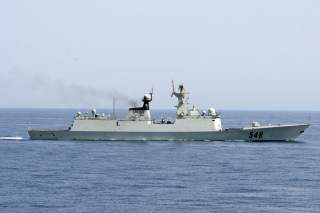 In just a few weeks the Permanent Court of Arbitration in The Hague will render its verdict in a case filed by the Philippines to challenge China’s longstanding maritime claims in the South China Sea. While the result of that arbitration remains unknown, Beijing has already telegraphed how it will react should the court rule in Manila’s favor.

For months now, Chinese officials have made Beijing’s case for rejecting the tribunal’s legal authority in the matter while characterizing Manila’s gambit as “irresponsibly frivolous.” The Chinese foreign ministry has already questioned the court’s authority and is boycotting the entire process, which it has derided as an “orchestrated performance.” As legal scholar Jerome Cohen noted in a recent article, both the Chinese Society of International Law and the All China Lawyers Association have issued “dutiful supporting arguments” in favor of snubbing the process.

An additional disincentive for cooperation is the fact that the tribunal ultimately has no power to enforce its decision.

Notwithstanding Manila’s skillful presentation of its case in accordance with the UN Convention on the Law of the Sea, its exercise is nevertheless little more than last-resort attempt by the weaker party in the dispute to globalize the matter and to draw attention to what it, and its backers, regard as China’s contempt for international law and institutions.

In light of the nonbinding nature of the ruling, there is little reason, besides moral standing, for Beijing to abide by the arbitration or to engage in multilateral negotiations based on the outcome of that process. It also appears that Beijing has cajoled and rallied a number of regimes (Mozambique, Slovenia and Burundi among them) that could be called upon to vote in the UN General Assembly, or some other international forum, as Cohen points out, to delegitimize the court. Uncertainty as to whether Manila would build upon the court’s decision after Rodrigo Duterte takes office on July 1 has also diminished the pressure on China.

More important to understanding Beijing’s mind-set on the matter is the fact that even if the court had had the authority to rule in the case and the powers to enforce its decision, it is highly unlikely that Beijing would have been any more inclined to accede. The reason behind this is directly related to the historical narrative of “national humiliation” and the belief that as a product of Western imperialism, global institutions and the legal architecture of international law are little more than mechanisms to maintain a skewed distribution of power. In other words, a ruling by an international court against Beijing would have provided more “evidence” that the West, along with its allies in East Asia, are conspiring to keep China in a state of subjugation. As Zheng Wang demonstrates in his book Never Forget National Humiliation, the victimization narrative wields a powerful influence on decisionmaking in Beijing and public support for its dogged response to the perceived affront. A survey conducted in 2013 by Andrew Chubb also shows that 83 percent of Chinese respondents regarded the South China Sea dispute as a continuation of the so-called “century of humiliation.”

Having staked its legitimacy domestically by reinforcing the meme of national humiliation and by positioning the Chinese Communist Party (CCP) as the sole agent capable of restoring China to its rightful place near the pinnacle of the international community, the party has painted itself into a corner and would lose immeasurable loss of credibility should it allow a biased system, let alone a regional weakling, to take away with it regards as an indivisible part of its territory. Furthermore, with the construction of artificial island bases in the region to assert its maritime claims, Beijing has heavily invested materially in the area and has no intention of dismantling those, which again would be a humiliating blow to the CCP’s image.

A worrying consequence of this national-humiliation cognitive framework is that while Beijing’s increasingly bellicose statements regarding the dispute (such as Adm. Sun Jianguo’s warning that “we do not make trouble but we have no fear of trouble”) may only be “public diplomacy,” meant to deter its potential opponents, the narrative—wed as it is to the CCP’s legitimacy and pathological insecurities—may have an effect on Beijing’s ability to de-escalate should the dispute intensify. In other words, even if it recognizes the dangers of escalatory actions, it may nevertheless feel compelled to embark on such a course of action lest its support base crumble underneath its feet.

As a regional power aspiring to near-great power status, China now also seems to believe it has obtained the “right” to ignore the strictures of international law when its national interests are perceived to be threatened, and it will not hesitate to resort to moral equivalence by reminding its detractors of the many precedents that were set by other great powers over the years, the United States chief among them.

The CCP also appears to have convinced itself that China’s security is now contingent on expanding its zone of control away from its shores to create a “buffer zone,” an effort that could eventually translate into Beijing’s declaration of an Air Defense Identification Zone over the South China Sea, which maintains it has every right to do so if it is sufficiently threatened. In Beijing’s calculations, strategic imperatives are now intertwined with honor and prestige necessitating territorial expansion; any retreat on the issue could prove fatal to the CCP—at least this is what the leadership, whose sense of security is arguably questionable, seems to believe.

China’s response to the challenge to its claims in the South China Sea, which is says are “rooted in history,” has consequently departed from reality, with the result that no appeal to reason, to historical facts or ancient maritime maps, and no article of international law, will succeed in persuading Beijing to abandon its territorial ambitions—until such a time when the costs of intransigence become too high, at which point we risk crossing a line where clashes with regional powers, and perhaps the United States, are increasingly likely. For several years now, academics, government officials and journalists have searched archives for proof that would provide concrete answers on who, if anyone, should have sovereignty over the South China Sea. While such intellectual pursuits may be fascinating from an intellectual standpoint, they stand little chance of compelling the CCP to revise, or abandon altogether, its claims in the region. Unless some form of accommodation with other claimants is arrived at through creative parsing of the area contained within the Nine-Dash Line, it is unlikely that Beijing will back off. The other option—the use of force to settle the matter—is one that is in no one’s best interests.

Having attained a certain level of respectability in international relations, Beijing is no longer a “status quo” power. It therefore has less compunction in seeking to undermine or reconfigure global institutions when it sees fit, to “reorder the world” so as to better align the system with the new norms created by China’s reemergence as a major civilizational power.

The fate of the Permanent Court of Arbitration’s ruling is already sealed. Appealing to international law may have been a good idea on paper, but from the outset it had no chance of having any impact on the dispute.

J. Michael Cole is a Taipei-based senior non-resident fellow with the University of Nottingham’s China Policy Institute and an associate researcher with the French Center for Research on Contemporary China. He is currently editor in chief of The News Lens International. Follow him on Twitter: @JMichaelCole1.