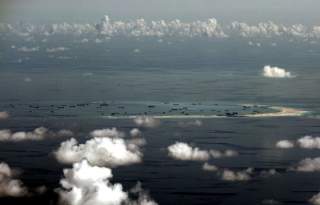 Last Wednesday, the USS Hopper, an Arleigh Burke–class missile destroyer, sailed within twelve nautical miles of Scarborough Shoal, a few rocks in the northern portion of the South China Sea.

We would not have known about the sail-by if we were relying on the Pentagon. Beijing announced the event and then made threats. The Chinese, we have to conclude, are itching for a confrontation.

Therefore, strategic Scarborough Shoal, a mere 124 nautical miles from the main Philippine island of Luzon and guarding Manila and Subic bays, could be the hinge on which America’s relations with China swings.

Think of Scarborough as perhaps this century’s Sudetenland. In the spring of 2012, Chinese and Philippine vessels sailed in close proximity of contested Scarborough. Washington brokered an agreement between Beijing and Manila for both sides to withdraw their craft. Only the Philippines did so, leaving China in control of the feature, which had long been thought to be part of the Philippines even though it was inside Beijing’s infamous “nine-dash line.”

Washington, unfortunately, did not enforce the agreement it had arranged, undoubtedly under the belief it could thereby avoid confrontation with China. The White House’s inaction just made the problem bigger, however. By doing nothing, the Obama administration empowered the most belligerent elements in the Chinese capital by showing everyone else there that duplicity—and aggression—worked.

An emboldened Beijing then ramped up pressure on Second Thomas Shoal, where China employed Scarborough-like tactics by swarming the area with vessels, and the Senkakus, eight specks under Japanese administration in the East China Sea.

In short, Washington, through timidity, ensured the Chinese took ever more provocative actions.

And ensured American allies questioned Washington’s leadership. Today, American policymakers complain that the current Philippine president, Rodrigo Duterte, has been cozying up to Beijing. Although thoroughly anti-American all his adult life, the Philippine leader has a point when he said his country, despite the mutual defense treaty with America, could not rely on Washington to defend his islands. The result of irresolute American policy is that China, which is dismembering the Philippines, is now more influential in Manila than the United States, the only nation pledged to defend the archipelago’s security.

In view of China’s growing confidence and assertion, it is no surprise that its reaction to the Hopper’s passage has been intense. State and party media, while replaying old themes of protecting “indisputable” sovereignty, went into overdrive with their most provocative language, that of inflicting indignity on the United States. “The reckless provocation ended in disgrace for the U.S. Navy,” wrote Curtis Stone of the Communist Party’s People’s Daily, China’s most authoritative publication.

The Global Times, the tabloid controlled by People’s Daily, predicted that if Washington did not change course, it would become “a lonely pirate” and “suffer complete humiliation.”

Washington’s reaction was, in keeping with its traditional posture, low-key. “All operations are conducted in accordance with international law and demonstrate that the United States will fly, sail, and operate wherever international law allows,” said Pentagon spokesman Lt. Col. Christopher Logan, without specifically mentioning Hopper’s patrol.

And when Washington policymakers did talk about the Hopper, they did so anonymously and in tones meant to avoid offense. A “U.S. official” said the transit was an “innocent passage” and not a freedom of navigation operation.

That stance allowed the Philippine defense secretary, Delfin Lorenzana, on Sunday to defend the U.S. Navy’s sail-by, because it did not impinge on his nation’s sovereignty.

Yet Hopper would have never made the transit if Manila were in sole control of the shoal. The motivating factor, of course, was China. “China’s goal in the South China Sea appears to be a gradual extension of its sovereignty to a maritime space the size of India,” Anders Corr, editor of the just-released Great Powers, Grand Strategies: The New Game in the South China Sea, told the National Interest.

In view of this expansive vision, an “innocent passage” is a counterproductive response.

“In our department in Newport, we’re always taking leaders to task for ‘self-defeating behavior,’” James Holmes of the Naval War College e-mailed me on Monday, commenting for himself and not on behalf of the U.S. government. “The anonymous official quoted in press accounts as saying the Hopper passage was an ‘innocent passage’ is guilty of that behavior.”

“Innocent passage is something ships do when passing within 12 nautical miles of sovereign territory,” Holmes, co-author of Red Star Over the Pacific: China’s Rise and the Challenge to U.S. Maritime Strategy, points out. “So if we’re depicting the Hopper passage by Scarborough Shoal as an innocent passage, we are conceding precisely what a freedom-of-navigation operation is supposed to dispute: that China is the lawful sovereign over Scarborough and that it’s entitled to a 12-mile territorial sea around the shoal.”

Scarborough is well within the exclusive economic zone of the Philippines, and China is essentially asserting squatter’s rights. Moreover, Philippines vs. China, the July 2016 Hague decision applying the UN Convention on the Law of the Sea, holds that the shoal does not confer a twelve-nautical-mile band of territorial water. “Our passes by Scarborough must show that they are not innocent in legal terms,” Holmes notes. “We must get our language straight, stay on message, and remind everyone regularly that the Hague tribunal smacked down China’s unlawful claims with extreme prejudice back in 2016. That’s how we avoid defeating ourselves.”

American officials, for years, have been characterizing freedom of navigation exercises around Chinese-held features as “innocent passages,” hoping not to rile Beijing. That strategy, unfortunately, has produced the opposite result.

The Trump administration, however, is changing four decades of America’s soft approach to China. That “pivot” is evident in the National Security Strategy, unveiled in December, and the National Defense Strategy, a summary of which was released Friday. China in these landmark policy statements is essentially characterized as an adversary.

Yet historic changes in policy take years to implement. “My belief is that we still have a long way to go to undo the pernicious impact of the policy of appeasement,” James Fanell, a former U.S. Navy intelligence officer with the Pacific Fleet, told the National Interest in strong, but nonetheless accurate, terms. “We have several generations of government workers who have been trained to be more attuned to ‘not provoking’ or ‘not offending’ the Chinese than in openly challenging their expansionist activities. This is despite two new policy documents, the NSS and NDS, that clearly intend to challenge Beijing’s outrageous expansionism.”

American policymakers are struggling to come to terms with Beijing’s open hostility to the United States. Obviously, Chinese officials could have ignored the Hopper’s passage, but their choosing to make an issue of it suggests they are determined to pick a fight.

Image: An aerial photo taken though a glass window of a Philippine military plane shows the alleged on-going land reclamation by China on Mischief Reef in the Spratly Islands in the South China Sea, west of Palawan, Philippines, May 11, 2015. REUTERS/Ritchie B. Tongo/Pool/File Photo​