China Will Be the True Winner of a U.S.-Iran War 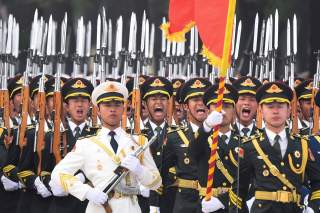 The United States is locked into an intensifying confrontation with China, and relations continue to rapidly deteriorate. In the past several weeks alone trade talks have broken down, President Donald Trump has raised tariffs on Chinese goods, and signed an order blacklisting China’s Huawei from purchasing American technology. Chinese state media is flooded with nationalist rhetoric preparing the Chinese public for “protracted war” on trade, and warning Americans that they will be the “most difficult opponents they have ever met since 1776.”

These tensions are aftershocks of a tectonic shift in America’s approach to China, as the Trump administration transitions from four decades of strategic “engagement” with Beijing to a new era of “strategic competition.” Trump has abandoned the naive hope that China could be persuaded to liberalize and become a “responsible stakeholder” in the U.S.-led liberal international order, and this adjustment is one for which he deserves significant credit. Indeed, Trump’s tough approach to China is the one area where he enjoys broad bipartisan support, as even in badly divided Washington there is growing recognition that China will be the most formidable geostrategic competitor the United States has ever faced.

Yet at the very moment when the United States faces its greatest strategic challenge since the Cold War, if not ever, some in the administration appear utterly distracted, beating the drums of war over an entirely less relevant threat: Iran.

In reaction to what they say is an Iranian threat to U.S. forces, the administration has in recent days deployed an aircraft carrier and B-52 bombers to the Persian Gulf, and it has prepared a plan to deploy up to 120,000 troops to region.

Despite the current crisis apparently being the result of misinterpreted intelligence, the country is nonetheless being driven toward war by the long-running irrational obsession with Iran that dominates the minds of some of Trump’s closest advisers, namely National Security Adviser John Bolton (of “Bomb, Bomb Iran” fame) and Secretary of State Mike Pompeo.

This obsession is irrational because, while such a war might benefit some of America’s so-called allies in the Middle East, namely Saudi Arabia, it would achieve nothing for the United States’ long-term global position.

When the United States invaded Iraq in 2003, China’s leadership began to speak gleefully of the surprising two-decade-long “period of strategic opportunity” that had just landed in their lap, breathing space in which China could improve its relative power while the United States squandered its strength. Now, America may be about to make the same mistake again, but on an even greater scale.

Keeping in mind that Iran is three times the size and population of Iraq, and that its military forces are far more formidable, there is simply no possibility that a war with the country would be anything other than a mess. At best a short conflict would be a soft-power disaster that damages U.S. international standing. But, more likely, the conflict would quickly become a new quagmire that makes our military struggles in Iraq and Afghanistan look simple by comparison.

This is made all the more likely by the fact that China and Russia could easily provide material support to Iran in any conflict with their American rival, including through the handy network of infrastructure links China is building across Central Asia as part of its Belt and Road Initiative.

So, leaving aside all the other reasons war in the Middle East might be a bad idea, such a conflict would disastrously weaken America’s geopolitical position vis-à-vis China at the worst possible time, expending and diminishing U.S. military and economic strength when every ounce of that strength is needed to balance a rapidly rising China.

Iran Derangement Syndrome may thus end up being catastrophic to America’s long-term national interest, extending the “period of strategic opportunity” beyond Beijing’s wildest dreams and leaving China free to fulfill its ambitions of surpassing the United States economically, securing military predominance in the Western Pacific, and achieving a leading role in the evolution of the global system.

There is still nuanced debate within Washington’s policy community over how to best deal with China, but both the hawks and doves involved in that debate can probably agree: if the United States goes to war with Iran, then it will mean the start of a Chinese century.

Therefore, now more than ever, the continued preoccupation by some in Washington with dragging America into another military misadventure in the Middle East is utterly unconscionable. America simply cannot afford the distraction when it is faced with the overwhelming challenge of its contest with China.

The 2018 U.S. National Defense Strategy rightly concluded that “long-term strategic competitions with China and Russia are the principal priorities” for America’s national defense, and stated explicitly that “inter-state strategic competition, not terrorism, is now the primary concern in U.S. national security.”

But just as President Barack Obama’s attempt to “pivot” to Asia was persistently undermined by his generals’ obsession with the Middle East and continuing the forever wars in Iraq and Afghanistan, Trump risks being sucked into a new quagmire contrary to America’s strategic interests, which reside firmly in the Asia-Pacific region.

Fortunately, Trump’s instincts are far wiser than those of his advisers. He has reportedly expressed anger and exasperation with their persistent attempts to draw him into new foreign wars against the will of the American people. He should continue to resist their dangerous and counter-productive obsession with Iran and keep his eye firmly on the ball: China.

Nathan Levine is a U.S.-China relations fellow at the Asia Society Policy Institute.