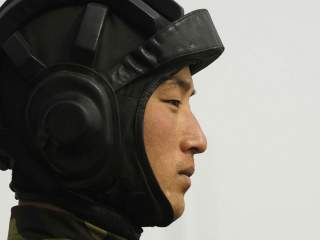 In July of 2001, Gordon Chang predicted an inevitable meltdown of the Chinese Communist Party in his best-selling book The Coming Collapse of China. Since then, China’s economy has increased by more than eightfold, to surpass even the United States on a purchasing parity power basis. Oops?

In Chang’s defense, he could not have anticipated the colossal blunder of President Bill Clinton and a Republican Congress in paving China’s ruthlessly mercantilist way into the World Trade Organization just five months after his book was published. That mother of all unfair trade deals—a well-deserved target of both the Sanders and Trump presidential campaigns—kept China’s Great Walls of Protectionism largely intact. However, it also opened U.S. markets to a flood of illegally subsidized Chinese imports, and catalyzed the offshoring of millions of American manufacturing jobs.

Since China’s entry into the WTO in 2001, the center of the world’s manufacturing base has seismically shifted as the People’s Republic of Unfair Trade Practices has used a dizzying array of illegal export subsidies, currency manipulation, intellectual-property theft, sweatshop labor and pollution havens to seize market share from both Europe and North America. To date, more than seventy thousand American factories have closed, over twenty million Americans have been put out of work and Chinese Communist Party leaders have laughed at Gordon Chang—all the way to their Swiss, Panamanian and Caymanian bank accounts.

China’s mercantilist WTO windfall notwithstanding, there are nonetheless growing signs that the collapse of China as Gordon Chang once predicted, and David Shambaugh is now intimating, may soon be at hand. As Exhibit A of the signs of China’s troubles I offer, in the remainder of this missive, an email correspondence directly from the Chinese mainland. It’s from an American citizen living and working with his Chinese wife and son in the PRC.

I will let you decide whether the views of this observer (name withheld to keep him out of a Chinese prison or shallow grave) is an accurate one or overly pessimistic. If it’s the former, it could well be the harbinger of Gordon’s Chang’s crystal-ball revenge.

“From what I can see, and my Chinese wife can see, China will probably soon implode. Just what the catalyst will be is uncertain. Just before that time, or as a result of that implosion, the [Communist Party] will probably try to get the population to focus outside the country, probably through conflicts in the South China Sea or Taiwan.

For more than two decades, I have been telling people that the first thing China would do before trying to take Taiwan would be to take the Spratly Islands. If the world simply ignored that, then Taiwan would be next.

Hong Kong is a bitter, poison pill left by Britain for China. There will be no peaceful resolution of that problem.

The biggest problems in China right now are poisoned food, water, and air. Nobody trusts anybody, which is the reason why there is huge capital flight out of the country.

China has a national debt in excess of $28 trillion. But anybody knowing anything about Chinese accounting practices knows that number is probably just a very conservative number. Add some of the data and stuff Caixin [an online newspaper] is telling us about in terms of city and provincial accounting practices, and the numbers are horrible.

China wants its currency to become an international currency, but nobody knows its value. The only effective taxation going on here in China is [protectionist] for imports. The taxation system of businesses and income tax is completely broken and non-functional. There is no transparency in the financial system here. That is quite different from that of the Euro or the dollar. The fact is, the government is printing money like crazy here.

People are buying houses around here, but nobody is living in them. They don't trust potential renters. Homes are unaffordable for most people unless they use corruption to get the money needed. People have been investing in houses only because that is the only relatively secure form of asset management. Yet home purchases are at best leases since the government can come in at any time and requisition the land for other purposes.

Construction quality of housing here is horrible. If [province name withheld] had a big quake, the dead would be in the millions. China would almost immediately collapse.

The education system wherein I work is horrible. People in the West look at high math and science scores, but they don't realize that most of the students, like my son, cannot apply what they learn to similar math or science problems.

Students are completely unable and unwilling to ask questions. Professors and instructors don't have offices, let alone office hours, so questions on content the students don't understand are never answered. Of course, if a student fails a course, the teacher loses face, so every student passes.

If the university has a graduation rate at the end of four years of less than 97%, the university president loses face. Add on top of that the fact that around 2000, there were about 1 million college graduates. Compared to now, with over 7 million graduates, one has to ask: Where did they get all the qualified teachers?

My wife teaches in a public elementary school. The CPC is putting pressure on everybody to conform. Fun, considering the fact that the school would collapse overnight if its corruption were rooted out.

Real inflation in China is considerably higher than what the government figures reveal. For example, my wife reports that nearly all the food here in this Tier 2 city has doubled in price over the past three years.

While food prices typically go up about two weeks before Chinese New Year, they also normally go back down to pre-holiday prices. This year, food prices went up about 20% and have not gone back down.

My wife reports that middlemen in the food chain are mostly responsible for the food price increases. The farmers have not increased their prices because many prices are set by local government. However, because the middlemen have increased prices, demand for certain types of fresh foods has gone down. That means that while people in the cities are not buying because of increased food prices, the farmers have food rotting, unable to sell it.

I went to a farm not too long ago. What struck me was that in the apple orchards, as well as in the surrounding fields, even though the food was at that time being harvested, there were no bugs. I never saw that problem in the States, since there are mandated pesticide non-application times before harvest.

In most American markets, there will still be some food sold with insect marks on it. Most Americans don't realize what that really means. It means the pesticides are nearly, if not completely, gone from that food [because, unlike in China, they can’t be used during harvest time].

I have about 300 papers from my composition students about their lives to grade, many of which confirm some of the things I said above.

Have a great day.”

Have a great day indeed!

Peter Navarro is a professor at the University of California-Irvine. He is the author Crouching Tiger: What China’s Militarism Means for the World (Prometheus Books). His Netflix documentary film Death By China documents China’s entry into the World Trade Organization and its impact on America.