China Will Rein in Hong Kong Through Its Economy 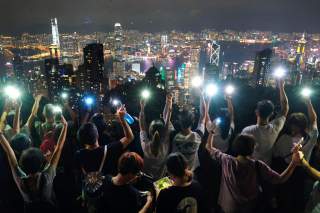 A concession was offered but the protests continue. An official call for new consultation has not halted confrontation. A recognition of legitimate public grievances did not produce any specific ideas for how to resolve them.

In brief, the sometimes-violent troubles in Hong Kong persist and—despite a surprising and long overdue official attempt to calm things down—there is no end in sight to mass demonstrations against the policies of both the local government and the national regime in Beijing. Instead, protesters continue to demand that the Hong Kong administration, headed by Chief Executive Carrie Lam, drop charges against some 1,100 arrested demonstrators, stop calling them rioters, hold an independent investigation into alleged police brutality and initiate political reforms leading to election of Lam’s successor and all local legislators by universal suffrage.

It’s possible that some of these eventually will be granted, but nothing is certain.

The basic reason is simple; agreeing to them is beyond the power of Lam and her beleaguered administration. Her government can only offer terms authorized by Chinese president and Communist Party chief Xi Jinping, and he has shown no interest in compromising with any form of political dissent anywhere in China.  Preserving, let alone strengthening, the civic and political rights demanded by Hong Kong demonstrators would violate his vision of the nation’s national interests—what he calls “the China Dream.”

To complicate matters, his increasingly repressive regime claims these protesters are enemies of national stability, encouraged by foreign “black hands”—especially Americans—who wish China ill. “What some US politicians are doing regarding Hong Kong shows the country’s old tricks aimed at slowing the peaceful rise of its rival [China],” the official China Daily has said. Or as a party official put it more colorfully, quoting a poem by Mao Zedong, critical Western diplomats are like “flies that moan and cry after hitting the wall.”

By the sometimes-paranoid standards of Chinese Communist Party politics, Xi contends that the nation faces grave dangers at home and abroad, usually caused by others and never due to his own policies. He finds “splittist” forces at work in Tibet, Xinjiang, Hong Kong and even docile Macao. The situation in offshore Taiwan is even worse, which firmly rejects joining the mainland under any terms yet on offer. Xi has called for an intense “struggle” against all divisive forces—using a term (fifty-six times in a recent speech) that party ideologues reserve for their most serious challenges.

Just what form “struggle” will take in Hong Kong remains uncertain. In the end, Xi must make the difficult choice between his political instincts: crack down on Hong Kong’s unruly dissenters and bring them to heel or tolerate an uncomfortable degree of continued autonomy as the price of preserving the city’s important role in the Chinese economy—especially regarding financial links to the outside world. He can’t have both.

Cracking down must seem tempting. Party leader Xi has steadily narrowed the space for political discourse across China in ways large and small. Academics face new restrictions on what they can teach or study; for example, a relatively liberal economic research agency in Beijing was recently shuttered because its reformist views differed, however politely, from those of the ruling party. Individuals who publicly oppose official policies quickly can find themselves in prison, cut off from family and mistreated harshly by jailers who ignore legalities. In Xinjiang Province, more than a million Uighurs, Muslims native to the region, are forcibly housed in “re-education camps,” effectively prisons where they undergo mandatory indoctrination designed to make them abandon tradition and become loyal followers of the party. All across China, the public is told to revere the intolerant Xi as a “servant pursuing happiness for the people.” Almost daily, new examples of constraint appear somewhere.

What form it could take in Hong Kong remains unknown. Most likely, it would involve jailing many more protest leaders and other party critics, perhaps with imported police personnel reinforcing the local force. (Credible reports say Beijing wants to avoid using the People’s Liberation Army rather than risk worldwide condemnation.) There would be new constraints on the local press, already largely self-censored by owners eager to avoid mainland reprisals against their other business ventures. Finding books critical of mainland programs would become even more difficult, perhaps impossible. Hong Kong’s common-law legal system—a basic underpinning of its global commerce—would be further eroded, with party wishes affecting more decisions. Companies that irritate the party would suffer; the future of Cathay Pacific Airlines is in doubt because at first it didn’t punish employees who joined protests. One certainty would be new “patriotic education” courses in schools, something local parents have managed to prevent so far. These would teach pupils to honor the party and its leaders, and not question decisions. Beijing officials insist Hong Kong schools need to combat “localism,” the tendency of most residents to identify themselves as Hong Kongers first rather than as dutiful citizens of the People’s Republic of China.

More extreme measures could include curfews and mainland-style limits on use of the Internet, though many analysts believe China would practice some restraint. Party leaders must know that can win the hearts and minds of only a few residents, not the majority who are the children or grandchildren of people who fled the Communist mainland many years ago. But they could well seek to enforce public conformity.

But at great cost. Hong Kong is by many measures the world’s third largest financial center, after New York and London, and hopes to expand.  Despite the current troubles, for example, the local stock exchange last week made a surprise $36.6 billion offer for the centuries-old London Stock Exchange, a merger that would create a financial giant linking capital flows and financial data of east and west. London quickly rejected the bid, but it indicates how Hong Kong—presumably with Beijing’s approval—wants to grow. Hong Kong already is the conduit for vast investment flows in and out of China, and thousands of foreign companies—some 1500 of them American—have offices there. A Hong Kong regulatory body reports that local financial firms manage some $3.1 trillion of assets, much in trusts controlled by mainlanders. Some may have dodgy origins; the 2016 Panama Papers scandal revealed that a leading law firm there had created 16,300 shell companies in Hong Kong, a well-known haven for tax avoiders.

The United States has a direct interest in the city’s fate. Some 85,000 American citizens live there; it exported $38 billion worth of goods to Hong Kong last year, and runs a large trade surplus; American foreign investment in Hong Kong—most of which passes through to China—totals $81 billion. Many of its 2,600 start-up companies are American owned. Rather than support violent upheaval, “foreign investors only hope to preserve the status quo—a Hong Kong that is stable, rules-based, transparent and open; one that is part of China but a uniquely easy place to do business,” Kurt Tong, till recently the U.S. Consul General there, has written.

China, of course, has an even greater interest in Hong Kong prosperity. Though it is no longer the prime source of foreign earnings—as was true decades ago when Chairman Mao’s zanier thoughts set national policy—it remains a key link to the global economy. Unlike China, Hong Kong has a convertible currency with few restrictions on foreign exchange. That helps make it a favorite place for wealthy (and influential) mainlanders to park or export their money; one complaint of protesters is that they have driven housing costs to world heights. (A 2012 Bloomberg investigation found that Chairman Xi’s sister then owned a multimillion-dollar home in Repulse Bay.)

And China has no obvious substitute for Hong Kong. In 2013, it opened a special Shanghai Free Trade Zone as a rival financial center, but it hasn’t prospered—partly because party officials won’t relax foreign exchange controls as promised. Thus, Hong Kong continues to make a more important contribution to the Chinese economy than its size would indicate and is supposed to be a key part of an expansive Pearl River Delta economic area.

However, a bill in the U.S. Congress could undermine that role. A 1992 law lets Washington treat Hong Kong as an economic entity separate from the mainland, and the United States has some twenty financial, law enforcement and economic agreements with it. Tariffs on Chinese goods don’t apply to Hong Kong, and it can import certain technology forbidden to Beijing. But the pending Hong Kong Human Rights and Democracy Act could undo much of this; basically, it would require the State Department to certify annually that Hong Kong’s autonomy remains intact, or special privileges would be withdrawn. If they were lost, then its appeal to foreign business would suffer and so would its contribution to the mainland.

So how could China end protests and uncertainty peacefully? Lam’s shelving of the extradition bill that touched off the problem—after three months of dithering—was a useful beginning. That bill would have narrowed the gulf between Hong Kong’s predictable legal system and the mainland’s arbitrary version, despite opposition from the city’s bar association, civil rights advocates and business interests. But more than legal worries caused up to two million people to take to the streets in recent months. Demonstrators also oppose a government-supported property system that rations new construction and drives home prices beyond the reach of ordinary workers. Young people in particular also complain about limited job opportunities and blame government policies for much of it. And most citizens resent China’s expanding role in local affairs, which contradicts 1997’s promise of a “high degree of autonomy” for fifty more years.