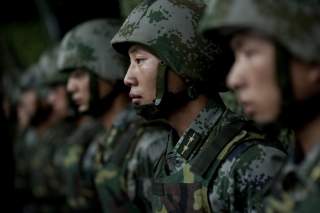 China’s military buildup has developed a broad array of new weapons systems that worry China’s neighbors, the United States and its allies. New, fifth-generation fighters like the J-20 and missiles like the DF-21D “carrier killer” are sounding the alarm in capitals from Hanoi to Washington.

But there are a whole class of other “weapons” in the People’s Liberation Army that should be causing just as much—if not more—worry. Some are hard to detect; others are hiding in plain sight. Still others are useful because of a lack of an American counter-capability, or are a reflection of socioeconomic changes going on across the nation.

China’s five most lethal (and forgotten) military capabilities remind us that when it comes to combat power, a holistic approach that takes into account more than just military factors will give us a more complete picture.

The U.S. military’s heavy reliance on the electromagnetic spectrum is a primary reason it is the most powerful in the world. Thanks to America’s network of military satellites, U.S. forces worldwide can pinpoint their own positions, target their enemies with precision, communicate and send data globally, and maintain situational awareness anywhere on the planet.

As a result there is a strong imperative for China to develop space warfare capabilities — specifically anti-satellite weapons that could render U.S. forces deaf, blind and dumb. China has tested terrestrial-based anti-satellite weapons twice—in 2007 and 2014. China’s Tiangong space station, scheduled to be operational starting in 2022, could become part of China’s space warfare capability.

We don’t know the full extent of China’s space warfare technology. It may be relatively small and within a strictly defensive context—or it may be something else entirely. If China believes it is in its vital interests to develop weapons to keep U.S. forces at bay—and weapons such as the DF-21D suggest that it does—developing and fielding anti-satellite weapons could be part of a broad package to deter America from interfering in China’s affairs.

China is the world’s factory, producing everything from barbeque grills to iPhones. iPhones, in particular, are a high tech device requiring advanced production methods, stringent quality control, efficient management and trained workers. In late 2014, Chinese manufacturers had set up 100 production lines manned by 200,000 workers, churning out an astounding 540,000 iPhones a day.

What if China applied its ability to mass manufacture electronics to weapons? Missiles, unmanned aerial vehicles, small arms and communications equipment could all be quickly mass produced at a scale not seen since World War II. More advanced systems, such as aircraft, armored vehicles and even ships, would obviously take longer, but even at that level of complexity the same principles apply.

A country that can churn out half a million iPhones in a single day shouldn’t have too much trouble manufacturing enough equipment—from uniforms to towed howitzers—to outfit a 10,000-man infantry division in a single day.

By 2020, China expects to have 195 million college graduates in the labor force. This is in sharp contrast to 1999, when only four percent of China’s college-age citizens attended college.

While a triumph of education is good for the country as a whole, the sheer numbers pose problems for individual graduates. College graduates expect white collar jobs with upward mobility,  and post-college jobs are increasingly difficult to find.

The People’s Liberation Army, attempting to capitalize on the surplus, is seeking to recruit college graduates. As the PLA grows more high tech, degrees in areas such as science and engineering will become increasingly useful—if not necessary—to China’s officer corps. The result will almost certainly be a more technically savvy and efficient PLA—albeit one with higher personnel costs.

During the 1991 Gulf War, China noticed the U.S. Navy’s vulnerability to Iraqi mines, with one cruiser and one amphibious helicopter ship damaged by sea mines. Twenty five years later, mines would be an economical means of conducting sea denial operations against the U.S. Navy, which still relies on the exact same aging minesweepers and helicopters it did in 1991.

China is currently estimated to have between 50,000 to 100,000 sea mines in its inventory, a mixture of contact, magnetic, acoustic, water pressure, and multiple fuzed weapons. China could lay minefields via submarines, aircraft such as the Y-8X maritime patrol aircraft, and even commercial fishing boats and trawlers.

The combination of stealth and striking at an enemy’s critical vulnerability is what has led experts such as Andrew Erickson to label Chinese sea mines an “assassin’s mace” capability.

China has experienced a boom in special operations forces (SOF) in the last two decades, resulting in an extensive array of different units spread across all of the services. Twenty to thirty thousand of the 3.2 million PLA troops serve in special operations units. The PLA even has a Special Forces Academy in Guangzhou province to prepare junior officers for service in SOF units.

Little is known about Chinese special forces except they specialize in direct action missions such guerrilla warfare, raids and rescues, but not other SOF missions such as training, civil affairs, and foreign internal defense. In a wartime scenario, Chinese special forces could be sent on raids against forward deployed U.S. forces throughout East Asia, particularly Vietnam, the Philippines and possibly even Japan and Guam.

Image: Flickr/Chairman of the Joint Chiefs of Staff