China's Affair with the 'Other Korea' 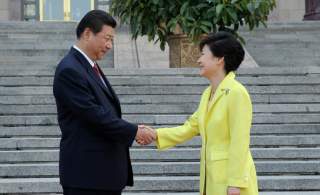 China is playing good cop/bad cop with South Korea in ways that may be detrimental to the Republic of Korea’s (ROK) security and the U.S.-ROK alliance. While Xi Jinping’s visit to Seoul (pointedly snubbing North Korea) last July was a seductive move to woo the ROK, Chinese defense minister Chang Wanquan’s warning against the ROK deploying U.S. THAAD missile-defense systems earlier this month sought to intimidate Seoul.

Putting the squeeze on Seoul over missile defense is yet another effort by Beijing to have it both ways. On the one hand, China keeps North Korea on life support as Pyongyang builds ever-more-capable ballistic missiles and nuclear weapons. It provides North Korea with oil, food and other goods and also protects it at the UN after Pyongyang’s various provocations. This support both ensures the continued division of Korea and helps China maintain a buffer between itself and U.S.-allied South Korea.

Now China is seeking a veto over ROK defense policy by trying to portray South Korea’s efforts to defend itself as part of China’s broader “containment” narrative, which claims that just about every U.S. action is threatening China. Like the rest of U.S. “rebalancing” policies in Asia, ROK deployment of THAAD or even Seoul’s acquisition of less capable missile-defense systems that are interoperable with U.S.-Japanese systems is viewed by Beijing as part of a larger U.S. strategy to block China’s rise and neutralize its nuclear deterrent.

Without getting into the delusional nature of Beijing’s allegations, U.S. missile-defense policies have no such capability. Similarly, ever since North Korea test fired a Taepodong-2 missile over Japan in 1998—the first time since WW2 that missiles flew over Japan—a shocked Tokyo has responded by building a missile-defense system to protect against the threat from Pyongyang.

Pyongyang has been beavering away, honing its missile capabilities. As Scott Snyder of the Council on Foreign Relations has tirelessly documented, North Korea has tested a total of twenty-nine missiles in 111 tests over the past year alone. This troubling reality has generated discussion between U.S. Forces in Korea (USFK) and Seoul about possible THAAD deployments. Beijing chooses to conveniently ignore this threat.

South Korea has limited its efforts to a “national missile defense” program to decidedly short-range technology. Geography makes even short-range missiles a real threat to Seoul, and South Korean officials say that their missile defense will be “interoperable” with the United States’ system.

But South Korea has thus far opted for modest systems, not integrally linked to the US-Japan missile defense network. It has purchased from the Israelis C3I Citron tree system and two Green Pine early warning radars. It has deployed PAC-2 point defense systems (rather than the more capable PAC-3) and it has AEGIS cruisers with SM-2 (rather than the more advanced SM3-2A missiles). But these systems may be insufficient to deal with the threat of increasingly sophisticated North Korean missiles. Meeting that threat requires long-range detection and a strong regional command-and-control.

If Pyongyang launched some of its recently tested short-range missiles or medium-range or longer missiles, Seoul would likely be unable to detect missiles coming head-on and there would not be ample warning time to utilize voluntary interoperability to connect to U.S. X-band radars in Japan—which would likely see the missile from a side angle much earlier—in time to shoot the missile down.

This problem would be remedied by South Korea networking into the U.S.-Japanese radar system, in which case radar sharing would happen automatically and in plenty of time to interdict a North Korean missile. This does not necessarily mean deploying THAAD, but only SM3-2A intermediate-range systems.

Seoul has been reluctant to take this step for fear of offending China, even though U.S. missile-defense programs are designed to counter small missile powers like North Korea and Iran. They are unable to threaten swarms of missiles and certainly not China’s second-strike capabilities. Moreover, budgetary and technical obstacles would likely prevent the United States from developing such a capability for the foreseeable future, if ever.

Nonetheless, many in South Korea fear that China would see such U.S.–South Korean­­–Japanese cooperation as part of a containment strategy aimed at Beijing, and are thus reluctant to pursue it—even at the expense of their own national security.

The issue is further complicated by tensions in ROK-Japanese ties; there are still deep-seated historical, psychological scars on South Korea as a result of Japan’s actions in the 1930s and 1940s in its then colony, periodically inflamed by Japanese officials flirting with revisionist interpretations of history. Prime Minister Abe’s recent protest of how U.S. textbooks portray “comfort women” used by Japanese troops in Korea is just the latest episode.

China, which has its own historical issues with Japan, skillfully plays on this mutual sense of victimhood. Never mind that historically China considered Korea as a tributary and invaded on several dozen occasions (though not since the 15th century).

Korea has long viewed itself as a “shrimp among the whales” of China, Russia and Japan in Northeast Asia. This geopolitical realism is one reason the U.S.-ROK alliance has strong support in South Korea. So it is not surprising that polling data indicates that a large majority of South Koreans would favor an alliance with the United States, even after reunification

Those fears, like those about missile defense, are greatly exaggerated. If reunification occurred, both Seoul and Washington would almost certainly rethink their alliance and recast it to reflect a new security environment. Both the ROK and the United States would engage Beijing in the event of any instability in North Korea and certainly about any reunification process. But China has for many years resisted any serious dialogue about possible contingencies on the Korean Peninsula, for fear of conveying a sense of abandonment of its clients in Pyongyang.

South Korean officials’ great fear is that, if they offend China, Beijing will make them pay an economic or political price—perhaps by trying to interfere with Korean reunification, either by backing a pro-China faction in North Korea or even by occupying the country, should Pyongyang’s Kim Jong-un regime collapse.

For the United States, Korean-Japanese discord is an impediment to allied coordination. Yet even if Japan was not an issue, South Korea’s caution in response to China pressure, would remain a factor complicating U.S. security strategy in East Asia. To its credit, U.S. president Barack Obama used his April trip to Asia for a trilateral summit that has spurred modest ROK-Japanese and trilateral defense cooperation.

South Korea seriously underestimates its leverage with China in the event of instability that leads to the collapse of the Kim regime or a negotiated effort to reunify Korea. Beijing’s worst nightmare is a unified Korea that is allied with the United States. But if China moved to impede unification, it could cause exactly that, pushing Seoul ever closer to Washington.

Yet China, the ROK and the United States have no shortage of overlapping interests in the event of instability in North Korea: all would want to secure North Korean nukes and missiles; limit refugee flows either North or South and to restore stability.

At the end of the day, Chinese pressure on a question of fundamental national security to Seoul may boomerang. In any case, while Seoul is unlikely to ignore legitimate Chinese concerns, it is difficult to see South Korea putting its security at risk to placate the imaginary fears of Beijing’s narrative.

Robert A. Manning is a senior fellow of the Brent Scowcroft Center for International Security at the Atlantic Council. He served as a member of the US Department of State Policy Planning Staff from 2004 to 2008, and on the National Intelligence Council from 2008-12. He tweets at: @Rmanning4.