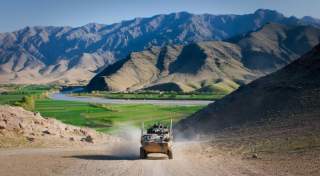 The 7th Strategic and Economic Dialogue (S&ED) with China has recently concluded in Washington.  Hawks will no doubt opine that the Obama Administration has not shown adequate backbone in standing up to China in the South China Sea.  Doves, by contrast, will complain that progress on key issues, such as North Korea’s expanding nuclear arsenal, have been superseded by tense discussions about reefs and rocks.

It has become increasingly clear that close U.S.-China cooperation is a prerequisite to managing problems across the globe, from the Ebola crisis in West Africa to the deteriorating security situation in the Persian Gulf to maintaining the delicate ecological balance in the polar regions.  A rather ripe area for regional cooperation that has not received adequate attention concerns the future of Central Asia, and the Afghanistan imbroglio, in particular.  Continuing grave instability in Afghanistan was once again underlined last week as the Taliban attacked the Parliament building in Kabul.

In a perfect world perhaps the United Nations together with the new Afghan President Ashraf Ghani would invite China to enlarge its role in fostering regional stability and PLA soldiers clad in blue helmets would flood the narrow alleyways and valleys of dangerous Helmand Province to finally accomplish what Washington has been unable or unwilling to do.  There is emphatically no support whatsoever for that scenario – least of all in Kabul and Beijing.  Still, Chinese strategists are talking about Afghanistan with an unmistakable urgency of late.  This edition of Dragon Eye will make a close examination of an early 2015 Chinese-language academic analysis of the situation in Afghanistan published in the State Council’s journal 亚非纵横 [Asia and Africa Review] by two Shanghai academics.

“The new generation leadership group’s policy toward Afghanistan will be clearer.  China’s foreign policy activity and dynamism concerning Afghanistan is obviously increasing,” these authors assert at the outset of the essay.  But that was not always the case, as they readily admit.  They note that Beijing was present at the initial meeting in Bonn in late 2001 to set up a post-Taliban regime in Kabul.  However, China quickly adopted a “相对低调的立场” [relatively low-key position] with respect to Afghanistan.  Therefore, “China cautiously avoided any kind of military intervention in Afghan affairs, and refused to participate in the International Security Assistance Force (ISAF).”  In a clear shock to the Chinese government and people, 11 Chinese engineers working on a road building project in Afghanistan were killed in a Taliban attack during mid-2004.  But “as everyone knows,” the authors assert, Afghanistan’s rapidly deteriorating security situation at that time was attributable to the new U.S. focus on Iraq.

For the next several years, Beijing’s approach remained limited.  While its aid contribution was modest, the authors report that China did, at least, fulfill its commitments.  However, the May 2008 agreement to invest $U.S. 4.4 billion in the Aynak copper mine seemed to signal a significant change in Beijing’s approach.  The Chinese authors note that this major investment implied that China might well become the largest investor in Afghanistan.  Not long after that seemingly major milestone, the Afghan situation began to deteriorate further as “塔利班力量卷土重来” [Taliban power staged a comeback].   While the Obama Administration tackled the supposed “right war” with a surge of troops into Afghanistan, these Chinese experts observe with obvious skepticism that the U.S. troop surge in 2010 did not reverse the “continuous deterioration of the security situation.”  One may detect between the lines of this passage a certain sense of Chinese schadenfreude concerning U.S. difficulties in Afghanistan.  If this sentiment exists in Beijing, it is likely tempered by “中国深感忧虑” [China’s deeply felt anxiety] and also by its strong determination not to replace the U.S. in the Afghan “权利真空” [power vacuum].

China has endeavored to employ both diplomatic and economic instruments to steer Afghanistan onto a more stable path.  In mid-2012, for example, then President Karzai attended a summit of the Shanghai Cooperation Organization (SCO) for the first time.  Beijing also in 2012 organized a set of trilateral discussions involving Afghanistan and Pakistan together with China.  These Chinese experts report that such diplomatic maneuvers “引起了西方的不安” [made some in the West nervous].  Nevertheless, as these Chinese experts report, it was in 2013 at the fifth S&ED China-U.S. dialogue that Afghanistan first really became a “未来中美新型大国关系建设的具体领域” [a concrete area for the building of US-China new-type great power relations].

Attempts to enhance Afghanistan-China commerce have proceeded despite the bleak security situation.  During 2010-11, bilateral trade reached U.S.$ 373 million.  In order to boost bilateral trade, it is claimed in this report that China eliminated all tariffs on 60% of exports coming from Afghanistan into China.  Exports from Afghanistan to China in 2013 (first half) were reported to be up 33%.  Besides mining, China has pursued mainly communications and road building investments, according to this report.  At the end of 2011, Beijing and Kabul reached an agreement of $U.S. 700 million to develop a natural gas field.  The Chinese authors of this report suggest that this deal – the first of its kind – “had major significance for employment and tax revenue in Afghanistan.”  Recognizing that it could not remain totally aloof from the security situation, China also started in 2012 to train members of the Afghan police force and related government personnel.  This effort, interestingly, seems to have included at least one joint training program undertaken together with the United States.  Work was apparently inaugurated in Kabul on both a major hospital project, as well as a technology development center during 2014.

Given these extensive initiatives, it is perhaps not surprising that Afghanistan’s new President, Ashraf Ghani would visit China on his very first trip abroad – a trip he made just a little over one month after his election in September 2014.  At the late October 2014 meeting in Beijing, the fourth convening of the so-called “Istanbul Process,” Chinese premier Li Ke Qiang pledged to continue unconditional aid of 500 million RMB per year and would provide training for 3,000 Afghan officials and police over the next 5 years.

Still, this Chinese assessment could hardly be termed optimistic.  They cite figures suggesting that violence has been rising in Afghanistan from 2012 to 2014.  Their assessment of Afghan security forces is that their funds are insufficient and also that they  “工作热情不足” [lack enthusiasm for their work].  The insider attacks that have plagued NATO forces in Afghanistan over the last few years are termed “绿袭蓝” [green ambush blue] events. In one of the article’s potentially most revealing passages, the authors characterize the current situation of U.S. forces in Afghanistan as “ ‘撤而不出’ 使‘阿人治阿’徒具其表” [‘pulling out but not leaving’ causes the notion of ‘Afghans ruling Afghans’ to be merely surficial].  In addition to souring tensions among other Central Asian states (e.g. Tajikistan) and Afghanistan, the authors also stress the dangers of escalating India-Pakistan rivalry in the Afghan context.  However, they are perhaps most emphatic in their conclusion that the threat posed by “ever increasing ties” between Al Qaeda and the “东突” [East Turkestan independence movement] to the security of China’s western flank.   Nonetheless, they contend that China must continue to be careful to “avoid following the tracks of an overturned cart by repeating the historical pattern of Britain, the USSR, and of the U.S. as great powers entangled in Afghanistan.”

Against the most cynical prognoses of the many hawks in Washington, China’s evolving policies toward Afghanistan hardly illustrate a rising power bent on territorial expansion.  To the contrary, Beijing’s policies toward its troubled neighbor have been marked by moderation and practical forms of support.  It is not yet clear whether the situation in Central Asia played any role at all in the most recent round of China-US talks in Washington this June.  The article summarized above suggests sufficient overlap in interests between the U.S. and China that Afghanistan might well be taken up as a good case for strategic coordination among the two superpowers during the upcoming Xi-Obama summit in September 2015.  A similar argument for bilateral coordination could be made with respect to volatile, but strategically pivotal Pakistan as well.

Even as Washington certainly needs to place more emphasis on cooperation with Beijing, Chinese strategists might also reflect on the fact the U.S. shuttered a major base close to China’s borders at Manas in Kyrgyzstan last year.  That would not have been done if Washington was genuinely pursuing a strategy of containment against China. Indeed, hawks on both sides of the Pacific have been engaged in jingoistic ‘spin’ that belies the facts.