China's Belt and Road Initiative Is the Ultimate Mixed Bag 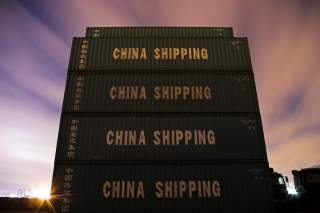 Earlier this month, China hosted a major conference in Beijing promoting its Belt and Road Initiative or, as many are calling it, the new Silk Road. The meeting was attended by high-ranking delegations from the International Monetary Fund, the World Bank, United Nations and leaders from around thirty countries. The purpose of the meeting was to inject momentum into the project, persuade other countries and institutions to help in the financing, and downplay concerns about Chinese imperial designs. The project will continue, but, as in any grand design, there are naysayers and rivals, which raises considerable questions over the long-term success of the project.

For the historically minded, the Silk Roads conjure images of exotic goods, long-distance trade employing camels, horses and humans, and linking China and Europe together as well as the Indian subcontinent. Historian Peter Frankopan observed of the world created by the Silk Roads: “This is where great empires rose and fell, where the after-effects of clashes between cultures and rivals were felt thousands of miles away. Standing here opened up new ways to view the past and showed a world that was profoundly interconnected, where what happened on one continent had an impact on another, where the after-shocks of what happened on the steppes of Central Asia could be felt in North Africa, where events in Baghdad resonated in Scandinavia, where discoveries in the Americas altered the prices of goods in China and led to a surge in demand in the horse markets of northern India.”

China’s initiative to revive and modernize the Silk Roads holds the potential to be a highly transformative development, potentially one of the pivotal events in history that opens the door to a new era of international trade and politics. To put it mildly, China’s plan—a massive projected $900 billion compendium of roads, pipelines, ports, telecommunications, railroads and other types of infrastructure—is ambitious. To make all of this more effective, the Chinese effort is accompanied by a push to for lower trade barriers and regulatory harmonization.

If the creation of a new way to boost global development, as first brought forth by President Xi Jinping in 2013, is successful in expanding economic ties throughout Asia, Africa, Europe and beyond, China will have created a new Eurasian trade bloc, with the Middle Kingdom at the center. Indeed, a new era of trade could well have a Chinese accent and be founded on the wealth and power of a more unified Eurasia and satellite economic zones, like Africa and the South Pacific.

But there are a few challenges to China’s grand design to rearrange the global trade order around Eurasia. First there is the geography: the obstacles to integrating the region from China to Europe are formidable, including vast distances, stubborn mountain ranges, sizeable deserts and inhospitable weather. While the Chinese have aptly demonstrated their ability to build railways and roads in some of the world’s most challenging terrain, outside of their home jurisdiction they do not have the same political clout to oust uncooperative local populations who may refuse to vacant their homes for a new rail line.

There is also a logistical issue facing China’s Belt and Road Initiative. Although President Xi is the driving force behind the program, there are multiple actors involved in the project and these are just from the Chinese side. Chinese banks, provincial governments and other entities are actively engaged in projects in Central Asia, Eastern Europe, South Asia and Southeast Asia to make the new Silk Roads work. However, the nagging question is: who is in charge, and how is this massive outpouring of Chinese energy and cash being coordinated?

Related to China’s massive thrust into the Belt and Road Initiative is the downside risk of pouring money into bad ventures. There are already reports that some of the projects currently underway are in trouble. Chinese banks and companies also must deal with economic and business realities. Yes, it is good to have long-term objectives, but the buildup of bad loans and holding of nonproductive assets can, in the short and medium terms, cause havoc with balance sheets and raise questions over how much risk Chinese firms can absorb.

There are also concerns from other countries on the new Silk Roads that they will be on the receiving end of China’s economic problems of excess capacity and surplus labor. Chinese companies have actively expanded their operations throughout the world, including in the Caribbean, Latin America, the Middle East and Africa. With this expansion have come sizeable contingents of Chinese workers, especially in businesses such as construction, which has created a certain amount of discomfort among local populations seeking employment.

China’s aggressive push into global trade and investment has been driven by the need for business profits, finding new markets for Chinese goods and securing, when possible, natural-resource supplies. In a sense there has been a convergence of business and geopolitical objectives, which worked well in the run-up of commodity of prices evident during the first decade or so of the twenty-first century. However, as commodity prices hit the wall in 2014, due in large part to slowing rates of Chinese economic growth, the nature of the relationship changed—much more in favor of the Asian giant. This has led to calls for a more equitable trade relationship in which non-commodity goods are given access to China’s markets.

Kenya’s president, Uhuru Kenyatta, attended the May meeting in Beijing and was outspoken about the need to rebalance China-Africa trade. According to the China-Africa Research Initiative at Johns Hopkins University, Africa’s fifty-four countries recorded a $34 billion deficit with China on total trade of $172 billion. The same source noted that Kenya reported buying $5.9 billion of Chinese goods, the bulk of it steel and equipment for a $4 billion Chinese-constructed railroad, compared to $99 million of Kenyan goods in return.

When asked about worries that China was reestablishing colonial trade patterns in Africa by pumping its markets with manufactured goods, extracting natural resources and taking a hefty amount of construction contracts, President Kenyatta indicated that China was “beginning to appreciate that, if their win-win strategy is going to work, it must mean that, just as Africa opened up to China, China must also open up to Africa.”

There is also a major geopolitical challenge in modernizing the Silk Roads: other Eurasian powers are not likely to sit by and watch China establish a massive trade bloc in its image. This is true for Russia, which has had a long rivalry with China, but it goes as well for India, which has its own designs for South and Central Asia. China’s rising might is also a consideration for Europe, especially for an export-driven economy like Germany’s, which is increasingly having problems of access with China.

Japan is another power that has an interest in the development of Eurasia’s economic order, especially as its primary global ally, the United States, has become more protectionist and inward looking. The same could be said for South Korea, which faces a potential trade war with the United States. And then there are the smaller countries, such as Mongolia, Myanmar and Vietnam, that are resistant to being economically absorbed by what some in their political elites perceive as a new Chinese empire.

China’s Belt and Road Initiative represents an effort to make a new world economic order, built around the planet’s second-largest economy. It is a bold, highly transformative project that would make Beijing the center of a new Middle Kingdom. However, the distance between what is being proposed and making it a reality is substantial. It also raises substantial questions for the United States about what role it wishes to play in Eurasia and the surrounding regions. The Trump administration has much to ponder in this, but starting trade wars is not likely to make friends at a time when many of them are hard pressed over how to deal with a resurgent China armed with a plan to reconfigure Eurasia’s geoeconomic landscape.

Pulling out of the Trans-Pacific Partnership may have been seen as a victory for putting America First, but it also removed an impediment to the spread of Chinese power and influence. China’s new Silk Roads offer up a competitive challenge to the U.S. role in the world; it is time for the Trump administration to come up with policies to deal with that changing landscape.