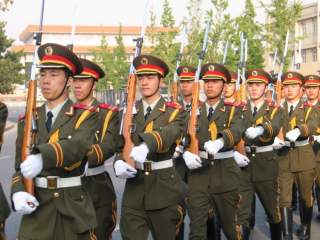 On November 29, Pakistani prime minister Nawaz Sharif broke ground on a section of the Hazara Motorway, which will connect the outskirts of the capital city of Islamabad to China through the Karakoram Highway. The four-lane, fenced road in mountainous Khyber Pakhtunkhwa province will, according to current projections, take two years to complete and cost $297 million.

The groundbreaking move, China’s Xinhua News Agency proclaims, “signal[s] the implementation of the China-Pakistan Economic Corridor agreement.” When the Corridor is completed at the turn of the decade, China will have effectively cut Pakistan in two. At the same time, Beijing will be able to use the Corridor’s new transportation links to faster deploy its forces to areas disputed by Pakistan and India.

In early November in Beijing, Sharif signed Corridor pacts authorizing $45.6 billion in projects in his country. Of that total, $33.8 billion is allocated for electricity generation—the addition of 16,520 megawatts by 2021—and $11.8 billion for transportation infrastructure.

The November pacts follow those signed this February, when the two countries inked deals to improve the Karakoram Highway and build an airport in Gwadar, a port on the Arabian Sea near the Iran border. The February agreements in turn came on the heels of one signed last year, when China and Pakistan agreed to build a fibre-optic cable from the Chinese border to the city of Rawalpindi, next to Pakistan’s capital.

Chinese premier Li Keqiang called the Corridor, during his visit to Pakistan in May of last year, a “flagship,” and the ambitious undertaking is indeed a wonder to behold. The transport and communication links—roads, railways, cable, and oil and gas pipelines—will stretch 2,700 kilometers from Gwadar to the Khunjerab Pass, where the Karakoram Highway leaves Kashmir and enters China, not far from the Chinese city of Kashgar.

Moreover, Islamabad will establish special economic zones in the Corridor where Chinese companies will locate operations. Beijing, as Tarique Niazi of the University of Wisconsin observed, is trying to “integrate Pakistan into the Chinese economy by outsourcing low-tech, labor-absorbing, resource-intensive industrial production,” and the Corridor initiative makes it easier to transform the client state “into a giant factory floor for China.”

Beijing has obviously gone all-in on Pakistan. Sharif’s government will provide 15 percent of the financing for the cable to Rawalpindi, but almost all the rest of the Corridor projects will be on China’s tab. Pakistan does not have the money to pay for the large projects, and according to Khawaja Asif, Pakistan’s minister for water and power, Pakistan will not be incurring debt.

Beijing, it appears, will be providing almost all the funding, which means it will, one way or another, own resulting cash flows as the projects are supposed to be profit-making. Chinese companies will participate in the building of the infrastructure, and Chinese banks, especially the China Development Bank and Industrial and Commercial Bank of China, will be providing financing. The Beijing-sponsored Asian Infrastructure Investment Bank, when it opens its doors for business next year, will probably support Corridor projects as well. Sharif, therefore, should be worried that the tide of Chinese cash will effectively turn his country into Beijing’s newest colony.

All the prime minister has to do is look at Gwadar to see Beijing’s designs for Pakistan. China last decade provided about 75 percent of the funding for the strategic port’s first phase of development. In February of last year, Islamabad transferred operations of the port to China, specifically state-run China Overseas Port Holding Co. Many believe the Chinese navy will use the facility, eventually turning it into a formal base.

For now, Beijing’s strategy is to build additional facilities in the port area so that it can then offload oil there and send it across the Himalayas to Xinjiang. On paper, the overland route eliminates the need to ship crude through the easily blocked Malacca Strait, but the Gwadar-Kashgar plan has its own vulnerabilities, especially at both ends.

At the southern end, Gwadar is cut off from the rest of Pakistan by the separatist insurgency in Balochistan province, which has caused turmoil there since the 1960s. In the middle of last decade, Baloch separatists kidnapped and killed Chinese engineers in highly publicized incidents. As a result of the deteriorating situation, Beijing in 2009 decided not to go forward with a multibillion-dollar refinery planned for Gwadar.

Sharif, as part of the just-signed Economic Corridor deal, promised to provide security for China’s projects, but his ability to honor the pledge is dubious. Baloch leaders have already expressed opposition to Beijing’s increased involvement in Gwadar. “We have not invited them,” says Amir Ahmed Suleman Daud, referring to the Chinese. His people, he states, have no choice but to “defend our land.”

At the route’s northern end, in what Beijing calls the Xinjiang Uyghur Autonomous Region and local Uyghurs claim is the East Turkestan Republic, the security situation is rapidly deteriorating. So far, the Chinese have been able to put down resistance to their increasingly harsh rule, but Beijing’s policies look unsustainable. Transport links through Uyghur lands, therefore, are vulnerable to attack.

Despite everything, Chinese leaders think they can, through money, solve the security problems at both ends of the Economic Corridor. That, however, is unrealistic as their policies have in fact only made matters worse, both in Balochistan and Xinjiang. As Syed Fazl-e-Haider, a Pakistani expert on development, perceptively wrote this year, “One should keep in mind that development does not bring peace, rather it is peace that brings development.” Pakistan, therefore, can end up a sinkhole for Chinese cash, which only exacerbates the insurgency problems in South Asia—and inside China’s borders as well.

Beijing is not only creating militants and then taking them on. To make matters even worse, the Corridor enters China through an area India claims as its own. Beijing says it does not take sides in the territorial dispute over Kashmir, but at the beginning of this month, it abandoned its asserted neutrality. In a December 2 release, Xinhua News Agency stated that the Khunjerab Pass was “on the China-Pakistan border.” “The pass,” China’s official media outlet stated, “is a strategic point on the Karakoram Highway, which links China’s Xinjiang with Pakistan’s Gilgit-Baltistan region.” New Delhi, however, maintains Gilgit-Baltistan is part of India.

In 2010, the Chinese government issued a similar statement, but withdrew it after New Delhi’s protest. The risk for Beijing this time is that militant Pakistan launches still another attack, which India counters with a drive of its own, thereby threatening to cut the Corridor in two.

Pakistan has proven to be uncompetitive in the matchup with India: despite being led by military governments, the Islamic Republic has not been able to win wars against its large rival. So China is violating Oscar Wilde’s first rule of successful international relations: “A man cannot be too careful in the choice of his enemies,” he told us.

To Indian analysts, the Economic Corridor looks like part of a “pincer strategy” of China and Pakistan closing ranks to confront their country. Moreover, it does not ease Indian concerns that in recent months there has been a growing Chinese military presence in the disputed region.

Beijing, despite everything, looks like it is absolutely determined to do whatever it takes to first build and then secure its corridor running through the heart of Pakistan. Its plan, however, is almost certainly misconceived, bound to cause more turmoil in already troubled areas.