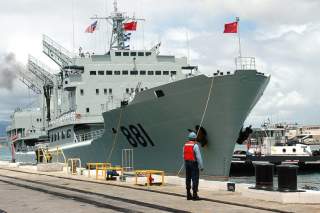 China’s response to The Hague’s recent South China Sea arbitration ruling has been mixed. Despite negative rhetoric to the press and some military posturing, Beijing has—for the moment—avoided some of the more incendiary possible responses, such as conducting land reclamation around Scarborough Shoal, and has indicated a willingness to renew dialogue with Manila. The United States should welcome evidence of Chinese restraint, but prepare for an uptick of tensions, especially after September’s G20 meeting.

The ruling of the Permanent Court of Arbitration on the Philippines’ submission was largely unfavorable to Beijing. The tribunal invalidated China’s “nine-dash line,” which covers roughly 85 percent of the South China Sea, denied any claims to “historic rights” therein, ruled that none of the maritime features included in the case are legally “islands” and thus entitled to 200-nautical miles exclusive economic zones, found that China had violated UNCLOS provisions to protect the marine environment, and concluded that Beijing had violated its obligations to refrain from aggravating the dispute, including by carrying out its large-scale land reclamation program.

China’s response to the ruling has in many ways been negative, even hawkish. A Foreign Ministry statement and subsequent government white paper rejected the ruling and restated that Beijing had no intention of abiding by it. Later, China’s Defense Minister made headlines by calling for preparations for a “people’s war at sea.” Beijing also took a few tangible steps to signal displeasure, including sending civilian aircraft to land on Mischief Reef and Subi Reef, conducting naval exercises in the South China Sea  and most notably, dispatching H-6K bombers and other aircraft as part of a new practice of regular “combat air patrols” in the region.

However, China avoided more provocative actions that some observers considered likely or possible reactions to a negative ruling. Beijing did not, for instance, immediately establish an Air Defense Identification Zone over the South China Sea, deploy fighter jets to its newly built airstrips in the Spratlys or begin land reclamation around Scarborough Shoal, which U.S. analysts warned would have allowed the PLA to complete a “strategic triangle” of bases in the region. Commenting specifically on China’s lack of dredging at Scarborough Shoal, U.S. Pacific Commander Admiral Harry Harris summed up the entire situation by noting that “I think we’re at a place where truly we have to wait and see.”

There were also signs that Beijing wanted to calm the situation diplomatically. On July 25, after an ASEAN ministerial meeting in Laos, Chinese Foreign Minister Wang Yi said that the situation should be “cooled down” and affirmed that China would work with ASEAN to “jointly safeguard peace and stability” in the South China Sea. Encouraged by his own discussions with Wang and Philippines Foreign Minister Perfecto Yasay on the sidelines of the meeting, Secretary of State Kerry said that he thought it would be possible to “turn the page” on recent tensions. Domestically, Beijing tried to calm the situation by tamping down, rather than encouraging, protests targeting the United States and the Philippines.

China’s mixed response to the ruling can be explained as a microcosm of the larger balancing act that Beijing is conducting in the South China Sea. On one hand, China has sought to signal its intent to enforce its maritime claims and gradually expand its effective control over the region. This is the heart of what Beijing regards as its long-term goal of becoming a “maritime great power.” Accompanying this is the domestic political need to assuage nationalists who demand a firm response to perceived slights, such as the arbitration ruling. Strident diplomatic rhetoric and military deployments, such as the new practice of conducting combat air patrols, service both of these objectives.

On the other hand, like his predecessors, Chinese president Xi Jinping also seems to understand the importance of regional stability—after all, a large volume of China’s own seaborne trade traverses the South China Sea—as well as the need to maintain at least somewhat positive relations with neighbors and the United States. Balancing these competing priorities—expanding control and maintaining stability—has led to an approach, often called “salami-slicing,” in which China gradually builds up its military and civilian capabilities in the region, and occasionally tests the limits on what other states are willing to tolerate, but then pulls back in order to preserve stability and avoid high diplomatic costs.

Along these lines, Beijing likely calibrated its response to the ruling to demonstrate its commitment to defending its maritime interests while avoiding two unacceptable outcomes. First was the desire not to complicate the upcoming G20 summit, scheduled for September 4–5 in Hangzhou. China has already been promoting the G20 as an opportunity to spur global economic development and to advance its relations with key states, including India, the United Kingdom and the United States. Second was the impetus not to do undue damage to Beijing’s relations with Manila and other South China Sea claimants, such as Vietnam, and to avoid a pan-ASEAN joint statement supporting the ruling.

Nevertheless, once the situation has adequately calmed down, China could eventually pivot back to a more intensive focus on maritime enforcement and power projection. The conclusion of the G20 will relieve some of the immediate diplomatic pressure to avoid an escalation of tensions. Meanwhile, Beijing’s near-term goal of avoiding an ASEAN joint statement has already been achieved, though China might make further efforts to stabilize its relations with Manila, Hanoi and others before taking additional actions that raise the regional temperature. Tellingly, Admiral Wu Shengli, commander of the PLA Navy, hinted at what else may be in store when he told the U.S. Chief of Naval Operations that “we will never stop our construction on the [Spratlys] halfway.”

Thus, Washington should be clear-eyed about the prospects for an uptick in tensions over the medium term. This begs the question of how the United States should respond to future provocations. A common perspective concerns the need for “imposing costs” on reckless and illicit behavior (see here, here and here). Examples of such costs might include facilitating joint patrols in the South China Sea with allies like Japan and Australia, increasing military deployments or even clearly including the South China Sea within the scope of the U.S. alliance with the Philippines. Many have pointed in particular for the need to expand and further publicize Freedom of Navigation operations in the region.

A different perspective is that the United States should work with China to institutionalize good behavior. In the past two years, Beijing has already agreed to U.S.–China memoranda of understanding on dangerous encounters at sea and in the air, as well as a regional Code for Unplanned Encounters at Sea. One of the areas that Washington should encourage is the expansion of such agreements. In particular, work should be continued on expanding rules of behavior to coast guards and paramilitary forces, such as maritime militias. Such agreements can pay dividends in reducing the consequences of a future dangerous incident.

In a broader sense, the value of any particular cost-imposing or confidence-building activity will be limited in the absence of a coherent strategy—namely, one that focuses on how best to ensure that key U.S. interests in the region, including peace and stability, rule of law, alliance commitments, as well as maintenance of stable U.S.–China relations, are upheld. Some of this is already outlined in the Department of Defense’s 2015 Asia–Pacific Maritime Strategy. This cannot be an ad hoc response made up on the fly, but must be a carefully designed series of actions that have been coordinated between military and civilian agencies. The next administration in particular will have to give significant thought to how such a feat can be accomplished, so that it is ready when tensions rise.