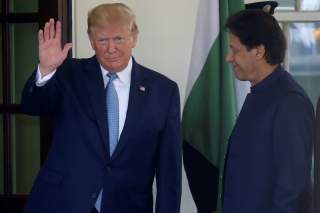 Pakistani prime minister Imran Khan hopes that his visit to the White House today will jumpstart relations with the United States after years of tension. Within the U.S. political context, President Donald Trump is a polarizing figure and his political opponents usually blame him exclusively for all ills on the international stage. When it comes to Pakistan, however, they should not. Pakistan’s problems are made in Pakistan and Trump should continue the recent bipartisan consensus to hold Islamabad responsible.

Those who seek a revitalized U.S.-Pakistan relationship can say history is on their side. Pakistan became a U.S. ally shortly after its 1947 creation, largely because Jawaharlal Nehru rejected U.S. partnership. As India drifted closer to the Soviet Union, Pakistan grew in U.S. strategic calculations.  Between 1954 and 1965, Pakistan received more than $1 billion in arms sales and defense assistance, a huge amount for the time. Cooperation only increased after the Soviet invasion of Afghanistan. It was not long until Pakistan became the third largest U.S. aid recipient, after Israel and Egypt.

The Roots of Pakistani Anti-Americanism

Pakistan has a knack for always labeling India the aggressor even when Pakistan—or the terrorists it shelters and funds—start wars. When war between Pakistan and India erupted in 1965 and again in 1971, Pakistan demanded the United States come to its aid. Washington instead chose neutrality and placed an arms embargo on both sides. Pakistani leaders saw this as betrayal since India was larger and had greater resources. The bitterness of that time colors Pakistani anti-Americanism today.

Pakistan’s nuclear ambitions contributed to tension. Pakistan initiated its nuclear program in 1955 and participated in the Eisenhower administration’s “Atoms for Peace” program. A decade later Pakistan inaugurated her first nuclear reactor with U.S. assistance. Pakistani leaders long kept their desire to acquire nuclear weapons private but that changed in 1965. That was the year that Pakistani politician Zulfikar Ali Bhutto declared: “If India builds the bomb, we will eat grass and live, can even go hungry. But we will get one for our own. We have no alternative.” Still, aside from Bhutto’s outburst, the Pakistani government was willing to tell American officials what they wanted to hear: “Pakistan will neither acquire nor produce a nuclear bomb,” Zia ul-Haq said. His formula—technology but no bomb—became the mantra for states like North Korea and perhaps also Iran, which sought covert programs. It also became the reason that an entire generation of American officials began to see Pakistani officials as duplicitous.

Pakistan’s overt drive toward and later acquisition of nuclear weapons led to periodic imposition of U.S. sanctions suspended or lifted only when Washington needed something from Islamabad. This reinforced the perception among Pakistani officials and broader society that the United States was a fair-weather friend and a selfish partner.

The coup de grâce for anti-Americanism, however, was the decision Pakistani military and intelligence leaders took upon East Pakistan (Bangladesh)’s loss in 1971 to embrace and promote Islamist extremism within Pakistani society as a glue to hold together Pakistan’s ethnically-diverse society. The number of madrasas teaching radicalism exploded. It was Pakistan’s fear of ethnic (and specifically Pashtun) nationalism that led Pakistan to exclusively support Islamist groups among the anti-Soviet resistance in 1979 when Pakistani authorities monopolized distribution of aid.

After the September 11, 2001, terror attacks, the United States needed Pakistan desperately. On September 22, 2001, Bush waived nuclear sanctions and declared Pakistan “America’s closest non-NATO ally.”  Former president Pervez Musharraf publicly pledged to “unstinted cooperation” to the United States in the fight against terrorism but, privately, Pakistan continued its support for the Taliban. Simply put, eliminating the Taliban was not a Pakistani objective and, at best, Islamabad was agnostic on Al Qaeda. Musharraf partnered with the United States for four reasons: security, economic revival, safety of nuclear and missile assets, and the hope that the United States would support Pakistan on the Kashmir dispute.

Pakistan’s double-game on terror has been deadly for the United States, destabilizes South Asia, and risks catalyzing Pakistan’s descent into state failure.

The U.S. Treasury Department’s Office of Foreign Asset Control (OFAC) has declared that 143 Pakistan-based individuals or organizations were guilty of engaging in terror activity. State Department terror lists are populated with Pakistan-based or supported groups, even if diplomatic considerations obscure mention of Pakistan in many of their profiles. Almost two thousand American servicemen have died in Afghanistan as a result of Taliban attacks and, by extension, Pakistani actions. In short, this has put Pakistan on the same level as—or even a level above—Iran when it comes to responsibility for the deaths of American servicemen. That alone is reason not to forgive Pakistan or buy into the fiction that Pakistani authorities are not culpable.

Nor should Congress or the White House do anything to obscure Pakistan’s aggression by proxy toward India and Afghanistan. This year Pakistani-backed terrorists have taken their terrorism to a new level. On January 22, 2019, Taliban terrorists—supported by Pakistan—attacked an Afghan army camp in Wardak and killed more than 120 people.

In February 2019 , a member of the Pakistan-based Jaish-e-Mohammed terrorist group attacked a police convoy in Pulwama, Indian Kashmir, killing forty people. In just the past three years, there have been at least seven major attacks on Indian targets by Pakistan-based terrorists. Certainly, Pakistani groups have repeatedly promised to crack down on terrorism, but the record is clear: they lie. Prominent ministers and allies of former Prime Minister Nawaz Sharif as well as his brother Shehbaz Sharif openly rallied with banned militants. While Trump may praise Pakistan’s recent arrest of the mastermind of the Mumbai terror attacks, he ignores that Pakistani authorities have repeatedly arrested Hafiz Saeed—and always released him once the spotlight moved on.

As the United States prepares to cut-and-run from Afghanistan, Trump and his allies may believe that now is the time to reset relations with Pakistan. They are wrong. Under Imran Khan, Pakistan has continued its move to become an instrument of Chinese strategic policies. Successive Pakistani leaders have fallen victim to China’s debt trap. Thus, even if Khan wished to chart an independent course, it would have been impossible for him to do so.

The simple fact, however, is that Khan willingly casts his lot with Beijing. The Gwadar Port today is solidly among China’s “string of pearls.” For all his cynical embrace of Islam as a political tool rather than a deep faith, Pakistan has not only remained quiet on China’s mass-incarceration of its Uighur population into concentration and “re-education” camps, but also endorsed China’s strategy at the United Nations. Pakistan’s recent crackdown on army officials on spurious corruption and other charges has less to do with countering the country and military’s endemic corruption and more to do with a People’s Liberation Army-directed purge of pro-American elements within Pakistan’s army. This undertaking was designed to make the Pakistani military more acceptable for long-term Chinese partnership. Simply put, Pakistan is now China’s vassal, and Khan is President Xi Jinping’s jester.

Perhaps Khan feels he has no choice but to kowtow to China. That simply shows his and Pakistan’s weakness. But, Khan had a choice about whether to encourage or discourage anti-Americans, and he chose to fan its flames. He has encouraged a consistent anti-American image in Pakistan, and the Pakistani government and officials continue to suggest the United States is “anti-Islamic” even as Pakistan receives billions of dollars in U.S. aid. Recent attacks by Pakistan’s proxies in Afghanistan show that Islamabad is not simply anti-American in rhetoric, but also in action. Khan may relish what a photo-op in the Oval Office might do for foreign investment, but he should recognize that what condemns Pakistan to its current plight is its continued use terrorism as an instrument of foreign policy.

Trump has reversed decades of diplomatic practice by putting summits with adversarial leaders ahead of diplomatic progress. Khan’s visit, therefore, should be seen in the same light as Trump’s meetings with North Korean leader Kim Jong-un, Turkish president Recep Tayyip Erdoğan, and Russian president Vladimir Putin. That’s unfortunate, but the greater danger is that Trump and the State Department take Khan at his word or put wishful thinking ahead of reality. Khan seeks not a new partnership, but to continue a pattern of duplicity, the cost of which can be counted in billions of dollars of wasted aid, Chinese backslapping, and American body bags.