China's Coast Guard: A Big Problem or a Big Opportunity? 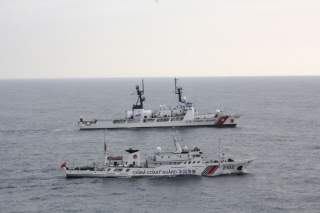 Now that the China Coast Guard is viewed as a major vector of Beijing’s maritime strategy, Washington think tank analysts are working late into the night trying to divine a way to counter China’s armada of imposing “white hulls.”  Powerful water cannon are the new “assassin’s mace” of “grey zone conflict,” so it seems.

Giving aid to Vietnam’s maritime law enforcement or having Japan donate patrol cutters to the Philippines are among the ideas that have become fashionable over the past two year. Sowing the first island chain with U.S.-financed radars to enhance “maritime domain awareness,” and by turns embarrass China, forms another fashionable concept.  Of all these proposals, the most ludicrous is to send the U.S. Coast Guard to patrol the beat regularly in the South China Sea. Surely, this most venerable American service is plenty busy saving lives, maintaining good order on the seas, and cleaning up messes in our own littoral waters.

Not long ago, the rapid improvement of the Chinese Coast Guard was viewed as an excellent opportunity for the U.S. to engage with an important Chinese institution during the period of its formative development in order to help it fully evolve into a responsible steward of the seas.  Unfortunately, that promising approach has been eclipsed to a large extent by the “rebalance” and related tensions overs “rocks and reefs.” However, a balanced and more considered approach to China’s maritime progression would involve carrots and not just sticks. It should also involve extending a hand in cooperation to the China Coast Guard -- rather than simply aiming to counter their every move.

Elsewhere, I have described the U.S. and China as two titans “locked in a toxic embrace.”  This phrase refers to the fact that Washington and Beijing could not only bring the world to the brink of the apocalypse through escalation of a military dispute in the South China Sea or by mishandling a nuclear crisis on the Korean Peninsula.  Indeed, as the looming tough negotiations in Paris will illustrate in the coming month, the tense relationship between Beijing and Washington will also likely determine whether the world can unite to address the climate change challenge effectively or not. The stubborn addiction of each of the two superpowers to fossil fuels (a trend only accentuated by the recent trend toward cheap oil) forms another factor that should highlight similarities in global outlook, for example in dealing with unstable producer countries, whether in the Persian Gulf or in Africa. But in the maritime domain, that addiction has had the especially nefarious impact of environmentally catastrophic oil spills.  A pair of recent Chinese articles, the focus of this edition of Dragon Eye, highlight the major possibilities for bilateral coast guard cooperation in spill mitigation.

It turns out that during mid-2010, just as the U.S. was grappling with the giant BP oil disaster in the Gulf of Mexico, China was also dealing with a major oil spill that occurred in the major northern industrial port of Dalian. Occurring in a city having a relatively green reputation, the incident was somewhat shocking, but given the frighteningly high occurrence of oil spills in Chinese waters, one also has the sense that this case represents just the tip of the iceberg for China’s challenge in this area. For that reason, it is quite encouraging that one of China’s most important news magazines 财经 [Finance and Economics] ran a follow-up investigative article in mid-2015. The article concludes by quoting a Chinese academic expert making the point that the 200 million yuan settlement (U.S.$32 million) with China National Petroleum Corporation (CNPC) is “对修复事故造成的海洋生态损失远远不够” [far from sufficient to restore the damage to wildlife caused by the accident]. The article articulates numerous other complaints: going after senior officials for evasive responses to journalist questions, pointing out that related administrative procedures have been “不透明” [not transparent], and suggesting that impacted communities, such as fishermen, have not been fairly represented in the process. It notes that if national-level agencies do not take enforcement seriously, that companies like CNPC will succeed in shirking their responsibilities and “violating environmental regulations …” In the end, the article suggests that the efficacy and justice of “中国式海洋事故善后案例…” [Chinese type maritime accident reparation cases] can be “called into question.” The article significantly demonstrates the high profile of such instances in Chinese discourse and likely reflects the rising green consciousness in the wider Chinese body politic – a tendency that even has the potential perhaps to eclipse the power of potent Chinese nationalism.

Another recent Chinese article, this one a research paper from the journal 世界海运 [World Shipping] published by the Dalian Maritime University, similarly suggests the urgency for bilateral cooperation to cope with oil spill mitigation. This paper is one of several Chinese studies of the BP Gulf of Mexico disaster that seeks to highlight lessons from that catastrophe for improving oversight of Chinese offshore drilling practices. This Chinese assessment blames the “双重失败” [the massive dual failure] of corporate management and government oversight.  The paper observes that the Gulf of Mexico disaster reveals the “巨大环境污染风险” [massive risk of polluting the environment] and additionally notes, moreover, that recent drilling related accidents in the Bohai Gulf are not encouraging. The author criticizes China’s oil spill response capabilities as “chaotic” and “weak.” The author criticizes that these responsibilities are spread among many ministries including Transport [交通运输部], Agriculture [农业部] and Land and Resources [国土资源部], among others.  Making a plea that these capabilities should be centralized under the State Oceanic Administration (SOA) [海洋局], the author goes even further to suggest that this agency requires the bureaucratic heft of a representative seat on the State Council in order to cope effectively with this massive challenge to China’s environment.  Also badly needed, according to this analysis based on the American disaster, is a “专门的应急反应处理中心” [specialized emergency response command center] with accompanying dedicated units. This article points out the possibilities of Chinese and American maritime professionals sharing best practices for the purposes of improving the global marine environmental situation.

Of course, Beijing and Washington can spend the next few decades squaring off over “rocks and reefs.”  If both sides do not exercise restraint in this “great game,” the result could be a cataclysmic war. Maritime professionals on both sides of the Pacific would do well to consider how much more positive their actions could be if their respective energies were channeled, at least to some extent, into cooperative endeavors for environmental protection rather than exclusively in the service of geopolitical contests. Today, the “rebalance” itself requires greater balance. In particular, it is essential that current policies undertaken within an increasingly zero-sum framework are accompanied by robust, simultaneous efforts to actively cooperate with Chinese maritime forces.