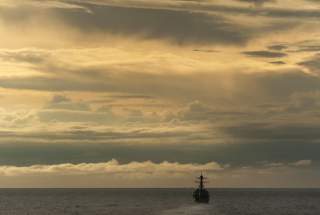 In a recent piece for China US Focus, Zhai Kun, director of the Institute of World Political Studies at CICIR, described the South China Sea as “a chessboard of international politics.”

Noting the sea’s fluctuating role in relations between China and its neighbours, Zhai then claimed that the current focus on the South China Sea (SCS) followed a July 2010 speech by then Secretary of State Hillary Clinton in which she asserted that it was a US “national interest.”

At that moment, Zhai says, it became a key stage for Sino-US competition and the rivalry between the various claimant states to the disputed Paracel and Spratly island chains was renewed. This chimes with a recent Xinhua editorial that blamed the US pivot for “emboldening” countries such as Vietnam and Philippines to more forcefully assert their claims to “sovereign Chinese territory.”

These are interesting assertions, but they don’t stand up to much scrutiny. The most recent changes in the SCS have occurred independent of U.S. actions; in fact it is more persuasive to argue that U.S. inaction - through its refusal to move away from its longstanding impartiality regarding territorial disputes - has emboldened Beijing to assert its claims more forcefully than it has for years.

In the past 2 years China has effectively taken control of Scarborough Shoal (sometimes referred to as Scarborough Reef), intimidated Philippine marines and partially blockaded on Second Thomas Reef, and most recently, moved a massive CNOOC oil rig to within 120 nautical miles of the Vietnamese coast.

While the deployment of the oil rig was certainly the most contentious move of the year so far - not least because of the anti-Chinese riots that it sparked in Vietnam and a very effective international media campaign by Hanoi - the most interesting developments of 2014 in the SCS so far have been the activities of a German-designed, license-built dredger. Not a sentence I expected to write at the start of the year, but in January it was not widely known that China was building islands in the South China Sea. Since then, satellite imagery analysis by IHS Jane’s and shipping data from my colleagues at IHS Maritime has uncovered a systematic pattern of dredging activity at a number of locations across the Spratlys.

This dredging is not about cutting channels through reefs, although this is happening. Instead, it appears to be a large-scale operation by China to build land features from which to project power in the southern side of the South China Sea.

The most extensive dredging site is at Johnson South Reef, the site of a naval battle between Vietnam and China in 1988 that left over 70 Vietnamese personnel dead. After the battle, China built a small concrete platform in the reef on which it established a small garrison and communications facilities.

There are clear strategic imperatives for China’s moves, not least the fact that it lacks something all the other claimants in the Spratlys have: an island with an airstrip. Taiwan has (Taiping) Itu Aba, Vietnam has Spratly Island itself, Malaysia has Sparrow Reef and the Philippines has Thitu (Pagasa) island.

If computer-generated images attributed to  the No. 9 Design & Research Institute of the China State Shipbuilding Corporation (CSSC) are to be believed, then the newly created island at Johnson South Reef could end up hosting a runway, hangars for fast jets, a decent-sized port and jetty, wind turbines, and greenhouses.

For a taster of what Johnson South Reef could end up being, we can look at Woody Island in the Paracels (which is also known as Yongxing Island and is the capital of the newly established Sansha district). Occupied by the PRC in the mid-1950s, it has since developed into a major naval and airbase from which China can project power into the South China Sea. A 2,700-foot runway opened in 1990 and has four hangars for fast jets and fuel stores. The PLA has also built three harbors, while an outcrop known as Rocky Island is believed to be a major regional SIGINT center.

If the CSSC images are any guide, then Johnson South Reef is in for a similar makeover. Based on PLA Air Force and PLA Navy Air Force inventories, the most likely occupants of the airbase would be the Su-27-derived J-11 or the Su-30MKK2-derived J-16, which both have a combat radius of at least 1,600 km.

It would also be expected to host maritime patrol aircraft, which would currently be PLANAF platforms based on modified Shaanxi Y-8 transports. Another development worth watching is the progress of the JL-600, a modernized version of the now retired turbo-prop SH-5 amphibian. Due to undergo testing in 2013 or 2014, this seaplane would give the PLA even greater flexibility in its South China Sea operations as it would be able to operate without a runway.

This type of speculation on how and when China will develop the islands it is building in the Spratlys might suggest that it is the only party involved in beefing up its territorial position. However, this is not the case. Since capturing Southwest Cay from the Philippines in 1975, Vietnam has substantially altered the island, adding a harbor and other land features in the past 10 years.

Taiwan, which controls Itu Aba (Taiping) island, has built an airstrip since 2006 and is currently upgrading its naval facilities. The Philippines has also announced plans to upgrade the airstrip and pier on Thitu (Pagasa) island, although resources remain a major issue for Manila.

What differentiates these developments from China’s is that none of the countries mentioned above are in a position or are inclined to change the status quo. Territories have changed hands previously (Vietnam reportedly took over Southwest Cay in 1975 when the Philippine garrison attended a birthday party on the neighboring Northeast Cay) but only China has the means and the desire to force the territorial issue to a head. Under the narrative of China’s “peaceful rise,” the issue was put to one side and opened the way for the 2002 Declaration of Conduct of Parties in the South China Sea.

What has changed since then is China’s definition of the South China Sea, which is now a “core interest,” and the quiet assertion of the “nine-dash line.” China would also argue that other claimants’ actions have forced it to react, while the vital strategic importance of the SCS’ sea lanes, through which over 80% of China’s energy imports arrive, has made control of the sea a political imperative.

If one wants to look at this more theoretically, one could do worse than look at the work of Dr Alessio Patalano of King's College, London, who suggested at a sea power conference at Royal United Services Institute (RUSI) in July that China is approaching the sea as a "continental power" that focuses on control of space. This is in marked contrast to maritime countries such as the United States and the UK, which were instrumental in setting the international norms for uses of the sea that have prevailed over the past century.

For China, the "sea is an area that needs to be brought under control of state," Patalano said, while for the 'maritime nations', the "maritime space is a commons to negotiate and states can only control it in a limited fashion". In the South China Sea, this difference in perception is moving beyond academic theory, however, and may force the United States to move off the fence of “non-interference” in sovereignty disputes that it has clung to for years.