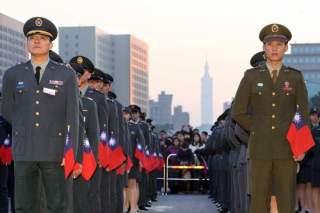 On Friday evening, in the Taiwanese city of Kaohsiung, members of the Black Island Nation Youth Front threw white paint and ghost money at Zhang Zhijun’s car. The demonstrators missed the director of Beijing’s Taiwan Affairs Office, but they splattered his security guards.

Protesters, some peaceful and others violent, dogged Zhang from the beginning to the end of his four-day tour of the self-governing island. On Saturday, three events, including a trip to a fair at a temple, were cancelled, in the words of Taiwan’s Mainland Affairs Council, “due to twists and turns.”

The demonstrations last week were not as large, nor the disturbances as serious, as those occurring during the November 2008 visit of Chen Yunlin, then the highest-ranking Chinese official to visit Taiwan. Yet the changed tone this time was not a sign of growing acceptance of China as some have said. This time, the opposition Democratic Progressive Party, sensing victory in upcoming elections, did not call for mass action as it did six years ago.

Zhang, despite the generally unfriendly reception, termed his trip “historic,” and in a sense it had been. He was the most senior Chinese official to visit the island in 65 years. Yet his tour showed that Beijing was even further away from its goal of absorbing Taiwan as the 34th province of the People’s Republic of China, and the unfavorable reception looks like it will force China to make its final push to absorb Taiwan at this time.

On the eve of Zhang’s visit, Taiwan Affairs Office spokeswoman Fan Liqing said the future of the island “must be decided by all Chinese people, including Taiwanese compatriots.”

Those words did not sit well in the small democracy because most Taiwanese consider their society separate and apart from China’s. Taiwan’s officials, whether from the ruling Kuomintang or opposition Democratic Progressive Party, told Zhang the same thing. “I asked him to respect the Taiwan-centric view of the Taiwanese public,” said Kaohsiung Mayor Chen Chu after meeting Beijing’s envoy, referring to Fan’s remarks.

In fact, Fan’s declaration showed how tone deaf—or arrogant—the Chinese are now when it comes to Taiwan. Whatever the case, Zhang showed Beijing’s fundamental insincerity. The Taiwan Affairs Office billed his visit as an opportunity to “listen to the voice of the Taiwanese people at the grass root level.”

The Taiwanese were speaking, but Zhang was not hearing. After returning to China, he spoke as if he did not comprehend a single word during the four days.  “This visit received an enthusiastic welcome from all circles and peoples in Taiwan,” he said. “Despite differing voices, the popular will is extremely clear.” And what is the popular will? “Everyone universally believes that peaceful development of cross-strait relations is the correct path and brings real benefits to people on both sides,” Zhang maintained.  “Everyone believes we should continue down this path.”

If that’s what Zhang thinks he must say, Beijing is in trouble. Chinese officials cannot acknowledge that their views about what they call “reunification”—and what the Taiwanese term “unification” as their state has never been part of the People’s Republic—are deeply unpopular on the island. And it seems that the harder China tries to promote political union, the less the people on Taiwan want it.

Up to now, Beijing’s strategy has been to promote economic integration as a prelude to political merger. At Beijing’s urging, China and Taiwan have signed 21 cross-Strait economic agreements in the last six years, during President Ma Ying-jeou’s presidency. Yet as commercial dealings have increased dramatically, the Taiwanese have pulled away from their large neighbor, and it seems that each tie-up has been more controversial than the preceding one.

Especially unpopular has been the Cross-Strait Agreement on Trade in Services, signed in June 2013 but not yet ratified by Taiwan. To prevent ratification, hundreds of students, later dubbed the Sunflower Movement, occupied the Legislative Yuan for 24 days beginning in the middle of March. Thousands of Taiwanese outside the legislature supported the action.

Zhang was supposed to visit then but had to postpone. The Kuomintang did not even want him to come last week as the Legislative Yuan was considering the pact, but Zhang insisted on making the trip then. Why? Leonard Chu, a retired professor of National Chengchi University in Taipei, thinks the Chinese envoy wanted to show the world that “the two sides are moving closer in spite of the Sunflower Movement earlier this year.”

Beijing can manage perceptions all it wants, but the overriding reality is that the overwhelming majority of people on the island do not want to become a part of the People’s Republic. Survey after survey show that only single-digit percentages of Taiwan’s population favor political union across the Taiwan Strait. In fact, many on the island do not even see themselves as “Chinese,” and over time Taiwan identity has steadily advanced. According to a poll released in April where respondents had to pick either “Taiwanese” or “Chinese,” 88.4% chose the former, with Taiwan identity strongest in the 20-29 age cohort.

Naturally, most of the island’s people, who make up one of the world’s most vibrant democracies, believe they have the right to determine their own fate. Beijing, on the other hand, disagrees. Xi Jinping, the newish leader of China, is forcing the issue, issuing a warning in the beginning of October of last year when he met Taiwan envoy Vincent Siew. “Increasing mutual political trust across the Taiwan Straits and jointly building up political foundations are crucial for ensuring the peaceful development of relations,” Xi said, according to remarks paraphrased by Beijing’s official Xinhua News Agency. “Looking further ahead, the issue of political disagreements that exist between the two sides must reach a final resolution, step by step, and these issues cannot be passed on from generation to generation.”

The words worried Taiwan watchers. For instance, Gerrit van der Wees, editor of the Washington-based political journal Taiwan Communique, at the time said that Xi was “pushing Taiwan hard into a corner.”

Beijing leaders evidently think their window for peaceful political integration with Taiwan is closing. Taiwan’s President Ma, who looks like he wants to stitch up a political deal with Beijing, has an approval rating hovering around ten percent, about the same percentage who want unification with China.

The next presidential election in Taiwan is in 2016, and many in the Chinese leadership apparently worry that Ma’s unpopularity will mean the generally Beijing-friendly Kuomintang will lose its hold on power. Therefore, China’s officials apparently think they will have to act while Ma remains in office, their last chance to grab sovereignty.

Randall Schriver, president of Project 2049 Institute and former deputy assistant secretary of state for Asia, met with Zhang in Beijing last month. He sees a new attitude in the Chinese capital where officials are eager to move beyond discussions of economic union. “I think China would be satisfied if at the end of Ma’s term they could say a process had been agreed, meetings had started, and there was conversation between the two sides on political issues,” he told an audience in Washington last month.

Given that Beijing has become increasingly aggressive in past months, that’s an optimistic view. China probably aims to achieve quicker results, especially because, due to Zhang’s visit, Beijing surely knows that opposition to political union is widespread and deep. So we should expect China to move on Taiwan soon and seek to absorb the island before Ma leaves office. After all, Xi Jinping thinks a political solution cannot be deferred to the next generation and he must now know that union would be impossible if the DPP wins in 2016.

The next assault on Taiwan, in the minds of Beijing officials, will be the final one.