China's Deadly Missile Arsenal Is Growing: What Should America Do about It? 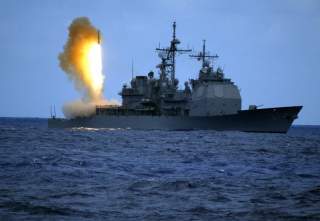 Russian violations of the Intermediate Nuclear Forces Treaty (INF) should push the United States to reconsider the continued value of the agreement for global security. Abrogating or modifying the treaty to allow the deployment of INF-class weapons to Asia, however, would bring with it substantial political, military, and budgetary risks while producing benefits that are murky at best. Evan Montgomery—a senior fellow at the Center for Strategic and Budgetary Assessments—in these digital pages has made one of the stronger cases for the United States acquiring forward-deployed intermediate weapons in Asia. However, even putting aside the potential for unintended consequences for security in other regions and for broader nonproliferation norms associated with renegotiating and modifying the INF, it is unclear if intermediate-range weapons could overcome the shortcomings of forward-based military forces or produce sufficient benefits to justify their costs.

One can agree with Montgomery that land-based missiles can be survivable and stabilizing, but only if the right investments are made to address the inherent vulnerability of basing forces within range of China’s extensive missile arsenal. Hardened launch facilities could address this vulnerability, but the United States has displayed a persistent unwillingness to harden forward bases in both Asia and the Middle East, despite growing threats from adversary missiles. While the Pentagon may treat missiles differently than other forces, it may be a wiser investment to harden bases to protect preexisting forward forces in Asia, rather than to acquire new weapons in hopes that they will provide sufficient impetus for necessary investments in passive defenses.

As Montgomery points out, it is plausible that the growing threat from China would make Japan and the Philippines open to providing the large dispersal areas in Kyushu and Luzon that would be required for anything other than a token force of mobile missiles and to achieve the deep magazines Montgomery envisions. This, however, highlights the political risks involved in forward-basing U.S. missile forces. Of course, it would be necessary to secure political support for forward missile bases before embarking on an expensive, multiyear development and acquisition program for a weapon that would be useless without forward bases. While Japan has become more assertive in the face of growing Chinese military power, substantial opposition to U.S. bases in Japan persists. Deploying mobile weapons that are likely to be targets of Chinese attack to a larger area of Japanese territory could serve to reinforce this opposition. A similar dynamic exists in Philippine domestic politics, despite growing support for U.S. reopening bases at Subic Bay and Clark Field, and could lead to difficulties in securing dispersal bases in Luzon.

Even if the Japanese and Philippine publics could be convinced of the need for U.S. missile bases, these foreign bases could introduce constraints on the use of the systems. U.S. alliances in Asia are quite different than the Cold War NATO experience. While they have grown closer, Japan and the Philippines are not bound in the same alliance with the United States. It is possible that Japan would be unwilling to allow the United States to use Japan-based forces, including intermediate-range missiles, to defend the Philippines and vice versa. Intermediate-range missiles would also be strategically inflexible, as they would only be useful in the case of a conflict in East Asia and could not be easily shifted to meet challenges in other regions, particularly if they were deployed in hardened bases. Long-range strike aircraft and submarines would not face the same political or strategic constraints.

Despite Montgomery’s claim to the contrary, the choice between intermediate-range missiles and additional investments in submarines or long-range strike assets is not a false one in the current and likely future budget environment. While the Army could resume the IRBM mission it lost in the INF, it is unclear what other capabilities it would be willing to sacrifice to afford it, particularly given the inability of the United States to disengage from the Middle East and the unlikelihood that the Army budget share will increase as the United States pivots to Asia.

Cost is of vital importance in the long-term competition between the United States and China. It is unclear if forward-deployed missiles would impose sufficient costs on China to justify the investment required to develop the first American land-based intermediate-range missiles in decades. While hardened facilities could require China to expend more munitions, China enjoys much lower procurement costs than the United States. For instance, the cost of a Chinese cruise missile is estimated at just $175,000. The Pershing II program, by comparison, cost $4.3 billion (in 2011 dollars) for 234 missiles, over $18 million per missile. The United States would have to force China to launch many missiles in order to come out ahead on that transaction. Mobile missiles could shift this equation if they imposed new costs on China. However, the persistent wide-area surveillance, loitering or retargetable strike and supporting C2 systems Montgomery suggests China would need to acquire to eliminate mobile missiles are just the systems China is already acquiring to attack U.S. carriers and other mobile targets at sea.

Given the survivability, political and budget risks associated with acquiring and forward-deploying intermediate-range missiles in East Asia, the benefits from such a deployment would need to be significant. Montgomery suggests that deploying U.S. missiles might repeat the INF experience and force China into negotiations that would limit its missile force. China does not have the same experience of arms-control agreements that the Soviet Union and the United States had by the time they reached an agreement on eliminating INF in Europe and it has not demonstrated a willingness to embark upon agreements that would put quantitative limits on its primary strike forces.

Furthermore, the security environment that China faces is quite different from that faced by the Soviet Union. The Cold War was essentially a bipolar affair and the greatest threat faced by the Soviets was the United States. China faces an increasingly multipolar world with a number of potential adversaries and threats independent of the United States which are located much closer to home, such as India, Japan and potentially Russia. Intermediate-range weapons are appropriate for intermediate-range threats and it would likely take much more to convince China to limit the numbers or eliminate missiles than it did for the Soviet Union. It seems unlikely that the addition of U.S. intermediate-range missiles would pose enough of a threat to bring China to the negotiating table, especially when it lacks other capabilities that could compensate for the loss of missile-strike capabilities.

Modifying the INF and deploying intermediate-range missiles to Asia could provide the United States with additional survivable deterrence and strike capabilities in a conflict with China if the United States develops and deploys the right set of missile capabilities as described by Montgomery. Even if this were to be achieved, forward-deployed INF-class missiles would bring with them a host of political constraints as well as an inherent strategic inflexibility that would not be faced by submarines or long-range bombers. It is also unclear if new missiles would impose sufficient costs on China to justify their acquisition costs or change China’s basic strategic outlook or willingness to agree to limits on its own missile forces. While a useful U.S. intermediate-range missile is not implausible, it is unlikely to justify the substantial risks that would come with its development and deployment, let alone reopening the INF to new negotiations with Russia.

Matthew Hallex is a strategic analyst at the Scitor Corporation. His opinions are his own and do not represent those of their employer or clients.