China's Economic Expansion is a Shot Across the Bow at Russia 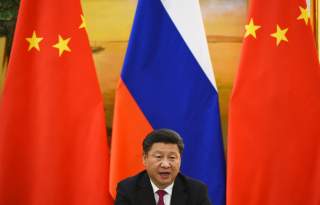 In Ancient Rome, the arrival of a conquering general from the front meant either a rapid change of political scenery or as much pomp and circumstance as could be drawn from its seven hills. With the lengths to which the Italian government went through to welcome Chinese President Xi Jinping last March to inaugurate Italy’s joining of China’s Belt and Road Initiative, or BRI, Romans may very well have asked themselves if both outcomes were taking place simultaneously. Outside of Italy, however, enthusiasm for the visit was more restrained. Even some of Italy’s closest European Union partners saw Italy as a modern-day Trojan Horse, betraying trans-Atlantic ideals for Chinese patronage.

Whatever their views on the visit, both Western press and policy circles overwhelmingly focused on what the trip meant for the EU rather than assessing Beijing’s motives. The Chinese angle went beyond co-opting a G7 member into its belt and road initiative. Beijing’s first successful foray into securing an EU investor partner for its BRI is not just an economic victory for Beijing, but a powerful warning shot to the Kremlin that China will not allow Russia to envelop parts of Europe spinning off the illiberal axis all on its own.

China’s investment money is a tantalizing offer to weak and inexperienced European political regimes starved for cash and legitimacy in a European neighborhood that has, since the start of the Trump administration, been drifting away from American influence and looking for new benefactors. So far, Russia has stepped into that role providing not only political cover for euro-skeptic parties and leaders but also assistance in winning the information space against more liberally-minded political parties. However, Moscow’s political cover does not pay the actual bills. Beijing’s offer would pay those bills and then some, without resorting to purchasing European manufacturing outright. That offer may not buy China political influence in the EU, but it most definitely challenges a geopolitical theatre that until now Moscow considered its rightful space of operations.

China’s BRI investment packages are not standard by any means but there is reason to believe that they follow a central directive in order to link every single BRI port and stopover. As such, China’s investment in Italy could easily outline a prototype for future core EU or G7 investment packages. Furthermore, knowing what exactly is offered in this package demonstrates just how competitive China is trying to be with Russia in Europe.

China and Italy signed a memorandum of understanding on the cooperation within the Belt and Road Initiative. The MOU mainly covered areas of transportation, trade and investment, financial cooperation, cultural exchanges, and sustainability initiatives. It also includes the establishment of the Italy-China Finance Dialogue, a tool used by both governments to coordinate cross-border investments. The agreement, however, is mainly an economic agreement at heart, estimated to bring in an estimated $2.8 billion upfront with the promise of many more billions in years to come.

This is a change in Chinese economic approaches in Europe, and certainly in Italy, where China had a long-standing reputation for purchasing Italian firms outright. This time around, China has offered a more long-term, seemingly more appealing offer of economic cooperation rather than an overt takeover. This distinction may not make a large difference for Italian companies looking to cash-in on Chinese investment, but it does make a difference from the political and social angle. To say that Italians are skeptical of Chinese commercial and social influence is an enormous understatement. Any new deal that the current governing Italian party would have considered needed these softer approaches in order to avoid being labeled as just another out-of-touch mainstream political party.

Before just last month, Italy was considered to have been at the very best favorable of Russia and at the very worst another victim of Russian political hijacking. Italy’s interior minister Matteo Salvini has often chastised the sanctions on Russia imposed by both the United States and the European Union as a response to the annexation of Crimea. Meanwhile, Italy’s foreign minister Angelino Alfano hoped to be able to bring Russia back into the G8. This friendliness towards Russia and its affairs is normally reserved for more fringe parties in what is considered to be the core of the EU, with only Eastern European countries led by anti-establishment and nationalist politicians fully in Russia’s corner. Yet, Italy is led by two formerly fringe parties with anti-establishment and nationalist bends who Italian investigators determined were and are still being helped by Russian information-space agents.

This political connection is buoyed by perhaps the closest economic ties between a core EU country and Russia outside of the Russo-German energy connection. In October of last year, Italian PM Giuseppe Conte met with President Vladimir Putin in Russia and signed thirteen agreements aimed at improving economic activity and coordination between Italy and Russia. This connection, while jarring to the transatlantic security alliance, is not surprising considering Italy and Russia’s long history of norm-challenging economic ties.

Still, Russia’s political and economic offerings pale in comparison to China’s much more promising offer. Economically, Russia simply does not have the cash or know-how to beat China in the investment game. China’s BRI is now a well-oiled machine with well over one-hundred-and-thirty country partners. Moreover, some estimates of the entire network’s worth are between one and eight trillion dollars. That level of affluence is not a card in Russia’s deck as the country currently faces steep financial hurdles due to sanctions and a weak internal economy.

Politically, both Russia and China face an uphill battle in Europe, with both countries’ image tarnished by Cold-War rivalries and more recent geopolitical “strong-arming.” Still, while Russia tries to infiltrate public discourse in Europe by manipulating social media, China has decided to offer two carrots and no sticks by framing its BRI as a win-win for both Italy and China. This much more public strategy not only seems more legitimate in the eyes of onlookers but also leverages Beijing’s massive investment potential. Whether this strategy is to be considered “buying out” Italy’s public conscience or simply Beijing relying on capitalist-inspired judo to achieve its goals remains to be seen. Either way, the tantalizing effect that more money in European’s pockets has on political acceptance should not be underestimated.

What Does this mean for China Russia competition in EU space going forward?

This is China’s first real foray into European geopolitics during a new age of American isolationism—it does not spell the end of Russian influence over the continent. Russia still maintains strong relationships in Europe by way of Putin’s personal bonds with European heads of state. The best example of this is his good standing with Germany’s Angela Merkel and to a degree France’s Emmanuel Macron. The aforementioned ties between Italy’s Giuseppe Conte and Putin also should not be discounted. These relationships though, like their members, are mortal. Merkel is retiring from politics later this year, while Macron’s leadership has been under internal attack ever since the first yellow jacket protest.

China’s offer to Italy and the rest of Europe is not dependent on personal relationships, nor is it bound by just political interests. Since the private sector will be keen to see these investments continue beyond changes in leadership, the staying power of this Chinese influence will be much greater than anything the Kremlin has to offer.  Considering the sheer amount of trade that happens in Europe on a daily basis, the private sector will also help push Chinese influence well beyond Italian borders, even into countries that are not starving for investment like Italy currently is. If China can secure favorable passage through the Arctic for its trade, its economic influence would appeal to more affluent EU countries with ports in the Baltic

China and Russia may very well be cooperating militarily and diplomatically ever since Russia’s annexation of Crimea, but their rivalry is still alive and well. General consensus forces onlookers to interpret Sino-Russian geopolitical developments in Central, South, and South East Asia as signs of allegiance between Moscow and Beijing. China’s overpowering offer to Italy, however, is not at all what a willing business partner would do to an associate. Italy’s joining of the BRI is reason enough to believe that Sino-Russian behavior in Europe should be viewed less as a nascent alliance and more as a global rivalry that has distinct, unconnected instances of cooperation.

Alessandro Regio has a Master of Arts in International Policy Studies from the Middlebury Institute of International Studies at Monterey. He is an international security analyst based in Washington, DC.