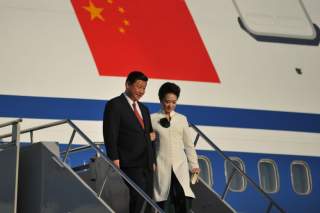 The past few months have been a strategic roll coaster for Asia. Earlier this year, China dealt a huge blow to the United States’ leadership in the region when it managed to enlist leading European economies as well as American allies in Asia as founding members of the Asia Infrastructure Investment Bank (AIIB), which will be headquartered in Beijing. Former Treasury Secretary Larry Summers went so far as claiming that the AIIB episode possibly marked “the moment the United States lost its role as the underwriter of the global economic system."

The Obama administration, which vigorously lobbied against the AIIB, was left isolated and bitter. It didn’t take long, however, before China similarly found itself isolated and bitter, when much of the region, including perennially neutral countries like Singapore, criticized—directly or indirectly—Beijing’s expansive construction activities in the South China Sea during the Shangri-La Dialogue. Recently, China announced that it is in the final stages of its massive reclamation project in the Spratly chain of islands.

More recently, however, the United States came under growing criticism for struggling to forge a coherent strategy on the Trans-Pacific Partnership (TPP) free trade agreement, as the Obama administration scrambled for legislative support to expedite the ongoing trade negotiations involving key Asian partners such as Japan, Vietnam, Malaysia and Singapore. This time, Singapore’s Foreign Minister K. Shanmugam warned, “American credibility will be seriously impacted if this [the TPP] doesn't go through," underscoring the repercussions of continued political squabbles over the TPP in Washington.

To drive home his point, Singapore’s top diplomat stressed the importance of trade to regional leadership in Asia: “In a sense the history of East Asia and the Asia-Pacific is being re-written through trade deals…Can you as a Pacific power, a world power, afford to not fully engage in this region?” The strategic lesson of the continuous back-and-forth hegemonic struggles between the United States and China is clear: Leadership in Asia is as much about serving as an anchor of stability—as Washington has sought to do for the past seven decades—as it is about undergirding the regional economic order by providing trade and investment incentives, as China has been efficiently doing for the past decade or so.

If the United States wants to remain as the undisputed regional leader, which is essentially the logic behind the Pivot to Asia (P2A) policy, it will have to not only deter further Chinese provocations in adjacent waters, particularly in the South China Sea, but also enhance its economic footprint in Asia in ways that are consistent with the developmental imperatives of the regional states.

There is this long tradition—particularly among Sinologists—of discussing China’s craftiness and strategic nimbleness in contrast to (supposed) American/Western naiveté and strategic lethargy. In many ways, Pillsbury’s The Hundred-Year Marathon is the latest permutation of an age-old school of thought, which portrays China as a highly calculating power blessed with ancient wisdom and extremely sophisticated long-term strategic planning that is designed to recreate the Middle Kingdom at the expense of a declining West.

A closer look at China’s conduct in adjacent waters, particularly in the South China Sea, however, evinces Beijing’s increasingly reckless and self-defeating conduct in its immediate neighborhood. Xi Jinping’s “Peripheral Diplomacy” is precisely a response to the growing recognition that Beijing has terribly mishandled its relations with neighboring countries, gradually inspiring a counter-alliance that is ostensibly led by the United States and invigorated by the re-emergence of Japan. Last year, after an almost decade-long hiatus, Xi assembled the Chinese Communist Party’s Foreign Affairs Leading Group to discuss possible measures to avoid a full estrangement with maritime neighbors.

In The Rise of China vs The Logic of Strategy, strategist Edward Luttwak goes so far as to describe China’s mischief on disputed reefs and islands in the Western Pacific as manifestations of “Great-state autism” and “acquired strategic deficiency syndrome.” As a highly perceptive observer, Luttwak rightly points out that China can’t simply have it all: If it seeks to crudely translate its new-found financial power into coercive territorial expansionism, then it will simply push its neighbors into America’s embrace.

Back in the mid-2000s, Joshua Kurlantzick underlined China’s immense charm-offensive success across Asia and beyond, to a point where Australians were more than happy to welcome Hu Jintao but deeply resented any visit by George W. Bush. Back then, China was largely seen as a peacefully rising superpower, while the United States was seen as a hubristic empire in decline. Today, China is overwhelmingly seen as a national security threat in countries like Japan, Vietnam, and the Philippines, while in other states such as Malaysia, Singapore, and Indonesia, where there are more positive popular perceptions of China, the ruling governments have been hedging their bets by fortifying strategic ties with Washington.

Yet, there is a reason why China has managed to achieve operational goals in adjacent waters—namely, winning the island scramble and building the skeleton of an Air Defense Identification Zone (ADIZ) in the South China Sea, while coercively revealing the contested nature of the Senkaku/Diaoyu Islands in the East China Sea (Japan denies that the features are even contested at all)—without fully estranging itself from its neighbors. And this has to do with China’s systematic and ambitious deployment of its vast financial resources, which it utilizes as a subtle chokehold on increasingly dependent economies in its peripheries.

Economic analysts such Joshua Cooper-Ramo, who coined the term “Beijing Consensus,” largely saw China’s expanding global economic footprint as a seismic transformation—a natural byproduct of the Asian country’s sheer size and growth—that is largely innocuous, if not favorable. For advocates of the Beijing Consensus, China has been ushering in a post-American world, where economic incentives and access to capital are not tied to specific policy prescriptions, as has been the case under the aegis of the Bretton Woods institutions. It’s all about “win-win” deals.

To be fair, the hypothesis held true for much of the 2000s, but things began to rapidly change after the Great Recession of 2008, which shook the foundations of Western economies but failed (at least until recently) to dent China’s double-digit growth. Drenched in a moment of (premature) triumphalism, Beijing began to throw its weight around, opportunistically exploiting signs of systemic vulnerability, if not strategic feebleness, among Western powers, particularly the United States.

But Beijing’s rash and impulsive actions have allowed Washington to fully recover from its Bush-era unpopularity and be welcomed as a force of stability in Asia (See the Boston Global Forum’s special report, which I have co-authored). Since 2010, a growing number of countries have come to openly solicit greater American strategic commitment to Asia, with the likes of Japan, Vietnam, Australia, India, and the Philippines upgrading their security ties with Washington.

China’s economic preponderance in Asia, however, has provided it with considerable leverage to keep most neighbors on a leash. A 2007 diplomatic cable shows how Singapore’s legendary founding father, the late Lee Kuan Yew, was worried about the strategic implications of China’s growing economic shadow across the region, reportedly urging the United States to “to pursue more FTAs [Free Trade Agreements] with ASEAN, or at least key members of ASEAN, which would give the region more options [aside from China].”

According to the cable, Prime Minister Lee described China’s strategy as pretty straightforward and domineering: “China tells the region, ‘Come grow with me.’  At the same time, China's leaders want to convey the impression that China's rise is inevitable and that countries will need to decide if they want to be China's friend or foe when it ‘arrives.’  China is also willing to calibrate its engagement to get what it wants or express its displeasure [my own emphasis].” For instance, China has effectively placed an investment freeze on the Philippines, which dared to take China to international court over the South China Sea disputes, while dangling large-scale investments to other Southeast Asian countries, which have not openly stood up to it.

Between 2001 and 2011, China pledged more than $600 billion in foreign aid and government-sponsored investment activity (FAGIA) to developing countries around the world. In recent years, China has doubled down on its charm-offensive by propping up alternative international financial institutions, from the BRICs New Development Bank to the AIIB and the “One Road, One Belt” new Silk Road initiative. While in the past China’s FAGA was more focused on resource-rich Latin America and Africa, the Xi administration is instead more interested in courting the goodwill of its more immediate neighbors.

As a prominent Chinese scholar bluntly put it, China wants to “purchase” friends just as it gobbles up contested islands in the Western Pacific. In short, China can, in contrast to Luttwak’s argument, theoretically avoid a full diplomatic backlash so long as it dominates the economic landscape—the core interest of states and peoples across Asia. So long as China maintains its position as a key trading partner and source of large-scale investments, particularly in strategic sectors such as utilities and infrastructure, Beijing will maintain significant influence over its neighbors.