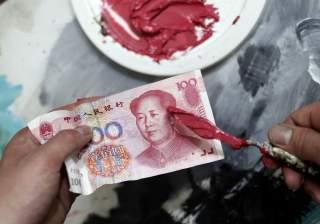 The people complaining about U.S. decline in the face of China’s rise under President Obama have been replaced by new people complaining about the same thing under President Trump. The debate over policy in the two administrations plainly matters, but it should not obscure basic facts. The most important of these facts is that, in terms of total economic resources, China is not in America’s league and may not even be catching up.

GDP Is Overrated, or Worse

It seems strange to say this with China having reported faster growth in gross domestic product (GDP) for decades. First, it’s worth asking if and when Beijing will admit that its economy struggled. For instance, China reported 7.9 percent GDP growth for the second quarter of 2009 yet continued the world’s largest loan program, and saw much of it turn to debt despite the supposedly fast growth. It’s almost as if the economy did not do nearly as well as the Communist Party claimed.

Still, the People’s Republic has almost surely seen faster GDP growth than the United States for most of the past forty years. The question is its value. For ordinary Chinese, disposable income (as reported by Beijing) is less than half of GDP per capita. Disposable income is money that can actually be spent while GDP per capita is an accounting device, with little relevance in the real world.

Even less relevant is GDP adjusted by purchasing power parity (PPP). PPP requires computing a price level for all of China and comparing it to all of America, itself slightly absurd. It relies on “the law of one price”—arbitrage across open markets causing prices for the same product to equalize. Chinese market barriers mean arbitrage often fails. Related, PPP is meant to apply to consumer buying power, while consumption is less than 50 percent of Chinese GDP. GDP adjusted by purchasing power is a poor measurement for many countries, including China.

Simple GDP is better than that, but it’s far from the only measurement and may not be the most important. The resources available to countries to pursue national interests are captured in net national wealth, which again takes the form of money that can be spent rather than an accounting result. If conceptualized and measured accurately, annual GDP should capture contributions over time to the stock of wealth. It should be not be surprising that Chinese GDP turns out not to be tightly associated with wealth.

Credit Suisse compiles net private wealth in most national economies going back to 2000. The data are unstable in that there can be later revision, so the most recent results should be considered tentative. Against that, there are two reassuring features: (i) any bias should be considerably smaller than the bias of the Chinese government and (ii) the results do reflect China’s rise through 2012.

From 2000–2012, net private Chinese wealth jumped from $4.66 trillion (less than India’s today) to $21.7 trillion, close to a 14 percent annual growth rate. American net private wealth over the same period rose from $42.3 trillion to $67.5 trillion. While the absolute advantage for the United States expanded, it did so by only $8 trillion because U.S. annual growth was only four percent. China was easily outperforming.

Just as GDP is not the perfect measurement of economic performance, nor is private wealth. Neither provide information about growing global concerns about inequality. But wealth does reframe the U.S.-China discussion. Claims that China is about to eclipse the United States are untenable in the face of $64 trillion less in net private wealth. Claims that China is outpacing the United States are challenged by the private wealth gap widening by $18 trillion in the past four and a half years after widening by less than half that the previous twelve years. In terms of private wealth, China is barely visible in America’s rear mirror.

Of course Credit Suisse could just be wrong about the PRC. And there are two more questions to raise. The first is whether U.S. dominance since 2012 reflects American stock and property bubbles being bigger than China’s property bubble, so that the gap will narrow when all bubbles pop. This is entirely possible, but will not matter much. Private wealth declines of the magnitude seen during the global financial crisis, for instance, would leave the U.S. $56 trillion ahead, the same-size gap as 2014.

The fundamental limitation of net private wealth lies in “private.” It is total national wealth which enables pursuit of national interest—the public sector must be included. This is not an easy task. The Party suppresses information on debt problems in the PRC’s huge banking system. The U.S. government’s evaluation of public-sector assets is questionable. However, U.S. federal debt and gross Chinese state assets are both very large, narrowing the wealth gap.

Other public liabilities include central and local government debt. These are considerably smaller than state corporate debt—their official level was $4.1 trillion at the end of 2016. Beijing’s numbers for this have become suspiciously stable and a comparable Bank of International Settlements (BIS) number is $1.1 trillion higher at the end of March 2017, rising such that $5.3 trillion can be used as the mid-2017 estimate.

The biggest state asset beyond corporate holdings is land. It is generally difficult to assign value to large amounts of land because mass sales would cause prices to plummet. It is more difficult in the PRC due to the government’s distorting role. Data over time on revenue from land sales imply a very round value of state land assets of $3.7 trillion at the end of 2016. It is probably a bit higher by mid-2017, though sales are unstable.

This land value could be too low, just as corporate liabilities are probably too low. But the errors run against each other, leaving a rough estimate of public sector assets as adding $6 trillion to net private wealth. Chinese national wealth mid-2017 is therefore approximately $35 trillion, perhaps a bit higher.

On the American side, the main event is federal debt, $19.8 trillion in mid-2017. State and local debt added almost $3 trillion to that. Simple. The problem lies with assets, meaning property.

The federal government owns over 27 percent of all U.S. land while state and local governments push that above 33 percent. Estimates of the worth of this land run from less than $3 trillion for federal and local combined to more than $125 trillion for just federal (using dubious assumptions about commodities). The Federal Reserve puts U.S. government nonfinancial assets at $14 trillion in mid-2017, $10 trillion in state and local government buildings, so its figure for U.S. net wealth exceeds $88 trillion.. But selling those buildings would crush prices, implying a far lower present value.

Land value estimates are imprecise, at best. Asset prices mean wealth can shift sharply. The Credit Suisse private wealth data have been—and can again be—revised. But Credit Suisse, the U.S. Treasury, the Federal Reserve, the BIS, and even the Chinese government (with respect to state corporates and land sales) provide cohesive data over time.

The United States is nearly $45 trillion ahead of China in net national wealth. Further, the gap is not presently closing. It is not closing in private wealth in isolation, it is not according to BIS debt data, and it is not according to this calculation method which utilizes Chinese reporting. In this sense, faster Chinese GDP growth is revealed as somewhat meaningless, at least starting this decade.

If America chooses not to compete with China in East Asia or lead globally, then no wealth advantage matters. When and where we choose to compete, the resource advantage rests overwhelmingly with us, and it will for the indefinite future.