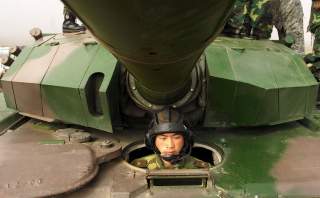 The Chinese People’s Liberation Army is in a period of extended change. In the wake of the 1991 Gulf War, the PLA made the conscious decision to shift from a manpower-intensive army to a technology-intensive army. Since 1980, the Army has shrunk by 60 percent.

At the same time, the Army has become more capable. New equipment has been introduced tailored to China’s security environment. New tanks, missiles and amphibious vehicles have entered service to make the PLA one of the best-equipped armies in the world.

Not that anyone would know it. Curiously, many of these new systems have been all but invisible to the outside world. The PLA guards China’s secure borders, and the Air Force and Navy are seen as being in the vanguard of China’s territorial disputes, especially with Japan and the United States.

Still, there are situations in which Chinese land forces could be a decisive factor. An invasion of Taiwan is one possible scenario. Action in the Diaoyu, Paracel and Spratly islands could require ground forces. With that in mind, here are five of the most lethal Chinese ground weapons:

The ZTZ-99 is China’s third-generation tank and currently the most modern tank fielded by the People’s Liberation Army. Designed and prototyped in the early 1990s, the ZTZ-99 shows obvious Western- and Russian-design influences. The tank is in low-rate production, with between 200 to 300 having been built.

The turret appears to be an angular version of the frying pan-shaped turret of Soviet T-72 tank. The 125mm main gun is a copy of the 2A46 Soviet tank gun and is serviced by an autoloader that can load up to 8 rounds a minute. The tank stores 41 rounds internally, a mix of armored piercing, high-explosive antitank, and high-explosive. The tank is also rumored to field a version of the Soviet AT-11 Sniper, a long-range antitank missile fired from the tank’s main gun. Rounding out the ZTZ-99’s armament is a 12.7mm heavy machine gun for engaging aerial threats and a 7.62mm machine gun mounted alongside the gun.

The ZTZ-99’s hull front glacis plate, position of the engine exhausts and number and shape of the road wheels point to a more or less direct copy of the T-72. The 1500-horsepower diesel engine, a copy of a German engine, gives it a higher horsepower-to-weight ratio than the American M1 Abrams.

The tank’s armor is a mystery. The tank’s overall shape strongly suggests a T-72 buried under additional armor, particularly on the turret and front hull glacis. The most obvious assumption is that it has the base armor of the T-72 plus a layer of Chinese composite. The latest version of the ZTZ-99 is rumored to have an active protection system, but few details are available.

The HQ-9 is a surface-to-air missile. In operation since 1997, it replaces the antiquated HQ-2, the Chinese version of the Russian SA-2 Guideline missile.

A long-range, high-altitude missile system, HQ-9 is designed to shoot down cruise missiles, aircraft and theater ballistic missiles. The HQ-9 has a range of 100 kilometers and is carried in groups of four on the back of a transporter-erector-launcher. The HQ-9 missile and radar system is similar to the original U.S. Patriot in being a “track-via-missile”: the missile emits electronic emissions of its own, making it hard for aircraft to detect.

The HQ-9’s HT-233 phased array radar system is similar to the Patriot’s radar system and is reportedly capable of tracking and engaging multiple targets. HQ-9 batteries can also be paired with radars designed to seek low-level and stealthy targets.

Turkey recently made a stir by selecting the FD-2000 system, the export version of the HQ-9, for its nationwide long-range surface-to-air missile system. The FD-2000 beat out competitors, such as the American Patriot, European SAMP/T Aster system and the Russian S-300. Key considerations were reportedly a price tag a billion dollars less than Western competitors’ prices and the promise of technology transfer. However, the deal is not sealed and negotiations have hit a snag over technology transfer.

The HJ-8 is a second-generation antitank missile developed to destroy enemy armor. First deployed in the mid-1980s, the HJ-8 is the current main antimissile of the PLA. Although the technology behind the missile is fairly old, it is an effective design currently being used in Syria by antigovernment rebel forces.

The HJ-8 is a medium antitank missile in the class of the American TOW-II or European Milan, and was probably inspired by both. It has the range of the TOW-II, but portability approaching the Milan. A ground launcher system breaks down into four parts: the infrared goniometer, tripod, tracking unit and one missile, with a total weight of just over 70 kilograms.

HJ-8 has an effective range from 100 meters to reportedly 6,000 meters and utilizes a semiactive command line of sight technology. Once the missile is fired, it trails a wire leading back to the launcher. To guide the missile, the operator keeps the the crosshairs of his optical sight centered on the target until the missile impacts.

The disadvantage to the HJ-8—and many older antitank missiles—is that the operator has to remain exposed while the missile is in flight. During the Arab-Israeli Wars, the Israelis discovered that antitank missile launches kicked up a large dust cloud, and a burst of machine-gun fire in the direction of cloud threw the operator’s aim. An HJ-8 operator would have to remain still, silhouetted by his dust cloud, for nine seconds before his missile would hit a 2,000 meter target.

Unlike the rest of the weapons on this list, the HJ-8 missile has been used in combat. The HJ-8 has turned up in Syria, where the rebels have been using it to destroy government armor and strongpoints. Syrian rebels have posted a number of videos on YouTube of HJ-8 missiles in operation. Speculation is that the weapons were drawn from Sudanese stocks and funneled into the country by Qatar.

The QW-1 is a shoulder-fired air defense system (MANPADS) capable of engaging aerial targets at low altitude and close range. The missile, manufactured by the China Precision Machinery Import and Export Company, is analogous to the American Stinger.

QW-1 can engage targets from 500 to 5,000 meters operating at altitudes from 30 to 4,000 meters. It has a maximum range of about 5,000 meters. The original QW-1 used an infrared seeker to lock onto and chase targets, while later versions incorporate ultraviolet light-seeker technology first seen in the Stinger. Identify Friend or Foe capability, to distinguish between friendly or enemy targets, has been added on to newer versions of the missile, as well as electronic counter-countermeasures to avoid spoofing. The manufacturer claims the missile has a 70 percent kill rate.

QW-1 is designed to be carried by a single operator, with a launcher 1.45 meters long and a weight of only 17 kilograms. A vehicle-mounted version, FB-6A, is mounted in groups of eight on the Chinese equivalent of the Humvee.

In 2006, the People’s Liberation Army Marine Corps unveiled a new family of tracked amphibious vehicles. The main vehicle, ZBD-2000, is an infantry fighting vehicle (IFV) capable of traveling at sea. Tall and boxy, the ZBD-2000 has a crew of three and can transport eight Chinese marines.

The ZBD-2000 is fully amphibious, propelled through at speeds of up to 45 kilometers per hour via a set of water jets mounted on the hull. The vehicle is equipped with hydraulically powered planes at the bow and stern that can be extended to allow it to hydroplane across water. The vehicle is also capable of speeds of up to 65 kilometers per hour on land.

The ZBD-2000 has a turret armed with a 30mm cannon and coaxial 7.62mm gun. It also mounts two HJ-73 antitank missiles, one on each side of the turret on launcher rails. The 30mm gun can be fired while the vehicle is in the water. A light tank version, the ZTD-05, has a crew of four and mounts a 105mm rifled gun. The gun can be fired while waterborne and is capable of firing laser-guided antitank missiles.

The Z series of vehicles are particularly important because they could be used not only in a Taiwan invasion scenario, but also in the South and East China Seas. A Type 071 landing platform dock could carry a force of ZBD-2000s that could launch at sea and land on a disputed island. Such a force, equipped with communications gear, thermal imagers and antitank guided missiles would be a formidable presence, even to enemy ships.