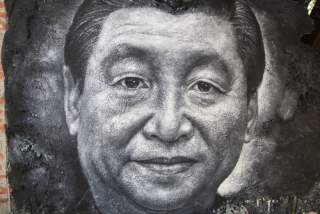 As U.S. troops withdraw from Afghanistan and America pivots toward Asia, China is responding with its own pirouette. Here Xinjiang is emerging as an important staging ground for new markets and energy sources in Central Asia and beyond, with the Eurasian Land Bridge freeing China from any sea-based containment strategy.

Yet the latest terrorist incident highlights a deep contradiction at the heart of Beijing’s Xinjiang policy. The Party-state’s desire to deepen economic reforms and expand global trade is antithetical to its constant drumbeat about “maintaining social stability and achieving an enduring peace” in Xinjiang.

Chinese authorities were quick to label the Ürümqi attack, like previous ones, a “violent terrorist incident,” with Xi Jinping “pledging to severely punish terrorists and spare no efforts in maintaining stability.” Yet the Party-state seems helpless to curb the current cycle of religious and ethnic violence. Internal government statistics speak of 248 “cases of violence and terror” in Xinjiang in 2013, with most of these incidents pitting China’s embattled Uyghur Muslim minority against a steadily encroaching Chinese state and its Han majority.

In December last year, Xi Jinping delivered a major speech on Xinjiang work before the twenty-five-member Politburo in which he outlined a new “grand strategic plan” for the region, according to the official Xinhua New Agency. While the speech hasn’t been made public, Xinjiang is central to Xi’s entire policy agenda, with a redoubling of efforts to secure and develop the region since Xi assumed power at the 18th Party Congress in October 2012.

During a September 2013 speech in the Kazakh capital of Astana, Xi Jinping called for the joint construction of a “new Silk Road economic belt,” and outlined ambitious plans to increase transport, communication, trade and people-to-people links between China and Europe over the Eurasian landmass. The massive Russian gas deal is only the latest in a raft of Chinese bilateral and multilateral deals signed with Kazakhstan, Turkmenistan, Kyrgyzstan, Pakistan, Iran and other Central Asian and Middle Eastern states over the last couple of years.

China’s expanding economic footprint in the region is being backed up with a more muscular diplomacy, as Xi Jinping seeks to use multilateral forums like the Shanghai Cooperation Organization (SCO) and the Conference on Interaction and Confidence Building Measures in Asia (CICA) to advance the country’s interests in Eurasia.

General Liu Yazhou, the political commissar of the National Defense University in Beijing, once labeled Central Asia as “the thickest and richest piece of cake bestowed on today’s Chinese people by heaven." As a fellow “princeling” with deep kinship and patronage ties with Xi Jinping, Liu Yazhou is rumored to be a close personal advisor. For decades, Liu and others have advocated a “go west” strategy for China.

Here, Xinjiang is crucial. As the “fulcrum” of any westward pivot, the stability of Xinjiang is paramount according to Liu Yazhou, and this means finding a solution to the religious and ethnic problems that have plagued the region for centuries. In his 2001 essay entitled “Grand National Strategy,” Liu outlined a three-stage shift West, which included the eventual partitioning of Xinjiang in small administrative units in order to deprive the separatists and extremists of their territorial basis. Presumably, this would be accompanied by increased Han migration, boosting further their already forty-percent share of the Xinjiang’s population.

Since coming to power, Xi Jinping has doubled down on Xinjiang. Top Politburo officials have visited the region far more often than any other frontier region, including Tibet. According to Xinhua, Xi personally convened seven high-level meetings and issued more than thirty directives on Xinjiang work since the 18th Party Congress.

The Chinese President personally toured the region in April, where he was quoted as stating: “The long-term stability of Xinjiang is vital to the whole country's reform, development and stability; to the country's unity, ethnic harmony and national security as well as to the great revival of the Chinese nation.”

Unlike his predecessor’s narrow focus on “leapfrog development,” Xi Jinping realizes money does not necessarily buy love, and instead is seeking to win the “hearts and minds” of ordinary Uyghurs through a series of new policy measures. In March the Xinjiang regional government started sending high-level Party cadres down to live in grassroots villages and communities, targeting the poor, Uyghur-dominated villages of southern Xinjiang.

These officials are tasked with “consoling” the common folk through regular household visits and sympathy money, while rooting-out extremist and antistate behavior, including wearing full-face veils, “bizarre clothing,” sporting long beards or engaging in any of the twenty-six “illegal religious activities.” This billion-U.S.-dollar campaign will rusticate 200,000 cadres over the following three years, with nearly 75,000 officials achieving “complete grassroots coverage” this year according to Xinjiang Party boss Zhang Chunxian.

Naturally, this sort of “impact-integration” produces a strong reaction. While most Uyghurs try their best to survive, even succeed, in a country where they often feel out of place, there is a small, yet significant, pool of individuals who have sought refuge in radical Islam. As we have witnessed elsewhere, cultural alienation and religious extremism are an incendiary mix, especially when confronted with an intrusive one-party state structure—the perfect formula for heinous acts of despair like the Ürümqi attack.

As the Chinese Party-state pushes further and deeper into Xinjiang society, violent counterattacks are inevitable. The state’s top-down, strike-first approach will only exacerbate the problem. What is needed instead is a far more gradualist, minimalist form of community building: slow but steady efforts at building trust, tolerance and mutual respect while ushering in a more equitable, democratic and inclusive form of politics.

Xi Jinping might have a firm grasp of the problem and its importance; yet, the Party’s security imperative—namely, the need to respond robustly and decisively to acts of terror in order to reassure an edgy and potentially disloyal Han majority—renders its economic agenda for boosting Uyghur income and employment levels virtually impossible. On the current course, Xinjiang’s Han community will monopolize any New Silk Road economic belt, while the Uyghurs remain trapped under increased surveillance and workplace discrimination.

Deng Xiaoping once said, “If you open the window for fresh air, you have to expect some flies to blow in.” China’s solution to ongoing ethnic violence in Xinjiang lies neither in a flyswatter nor bolted windows, but rather the location and elimination of the festering sources of inequality that breed the flies of violence. Otherwise, China’s westward pivot will end in Ürümqi.

James Leibold is a Senior Lecturer in Politics and Asian Studies at La Trobe University in Australia. He is the author of Ethnic Policy in China: Is Reform Inevitable? (East-West Center, 2013).