China's Grand-Strategy Challenge: Creating Its Own Islands in the South China Sea 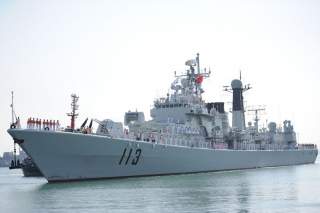 Satellite images analyzed by defense intelligence magazine IHS Jane’s show that China is reclaiming on Fiery Cross Reef in the Spratly Islands a piece of land that bears the shape of a 3000-meter airfield and a harbor large enough to receive tankers and major warships. This is not the first, but the latest in a series of land reclamations that China is conducting both in the Spratly Islands and the Paracel Islands in the South China Sea.

What does China want with this island building? What is the ultimate objective of these projects? The usual lens we use to decipher strategic moves on the international arena is ill suited to answer these questions. It views the game nations play in term of chess, but China is playing weiqi in the South China Sea.

Weiqi, better known in the West by its Japanese name, go, is the oldest Chinese board game that bears much parallel to an influential branch of traditional Chinese strategic thinking. While chess is a game of checkmate, weiqi, as its very name tells us, is a game of encirclement. In weiqi, there are no kings, queens or pawns as there are in chess, only identical stones whose power depends on where they are in the larger arrangement of the pieces. If chess is a contest of armies, weiqi is a struggle between configurations. Whereas the competent chess player aims at the destruction of the enemy’s physical power, a proficient weiqi player strives for the control of strategic positions, from which position-based power emanates.

If the South China Sea is seen as a chessboard, China’s moves in it appear largely trivial. Advanced forward are mostly pawns, while there is little movement of the more powerful figures. Perhaps the most formidable piece on the board is an underground base for nuclear missile submarines at Yulin on the southern coast of Hainan Island. However, this base is not located in the disputed areas. The main forces involved in the South China Sea dispute are rarely the military, but predominantly fishing boats and lightly armed government vessels. And the central objects of the contest are tiny, barren, often-submerged rocks.

Apparently looking at this game from a chess-like perspective, a very senior U.S. diplomat said, “great powers don’t go to war over rocks,” and a leading scholar of Chinese naval affairs concluded, “these tensions between a rising power and its neighbors are natural and constitute no major danger to the global balance of power, nor even to the normal functioning of the international system.”

(Recommended: Time For Japan to Get Its Own Nuclear Weapons?)

But in the eyes of the weiqi player, what China has done in the South China Sea is a classic example of how to play the game masterfully. The ultimate goal is to gain control of the region. The campaign to achieve this goal relies on creeping expansion, rather than major battles. This creeping expansion is a protracted undertaking that is played out in decades. In accordance with this strategy, salami slicing and small-stick diplomacy are the preferred tactics. The underlying logic is to gradually shift the propensity of things in favor of Chinese dominance by unobtrusively maneuvering the strategic configuration of the region.

This strategy requires a number of imperatives, each of which is built on top of another. The first imperative is to avoid open armed strikes as much as possible; clashes can be initiated, but only to exploit an existing favorable situation. The second imperative is to control the most strategic positions in the sea; if not already in possession, these positions must be seized stealthily if possible and in a limited conflict if necessary. The third imperative is to develop these positions into strong points of control, robust hubs of logistics and effective bases of power projection.

The history of the PRC’s involvement in the South China Sea dispute has neatly followed these imperatives.

While China was ready to engage in military confrontation, it usually avoided employing large armed battles to enlarge its sphere of control. Of the numerous attempts by Beijing to snatch new possessions during these six decades, only two involved armed conflicts. The first of the two took place in January 1974 against South Vietnam and concluded with China seizing the western half of the Paracel Islands, the Crescent Group, from the former. The second was a far smaller—but no less bloody—skirmish against unified Vietnam at Johnson South Reef in March 1988.

What’s remarkable about these two confrontations is that they both were fought at a time when a power vacuum was swelling in the region, with the United States withdrawing at the time of the first, and the Soviet Union pulling out at that of the second. In both events, China also enjoyed the acquiescence of the United States, the most powerful actor in the larger Asia-Pacific region. As a result, the military clashes caused little diplomatic repercussions.

The second imperative is well reflected in Beijing’s choice of places to occupy in the disputed areas. When China competed with Vietnam for a foothold in the Spratly Islands during 1988, it traded quantity for quality. It took six reefs as opposed to eleven by Hanoi. But five of the six are among the most strategic features in the archipelago.

China’s first choice in the Spratly Islands was Fiery Cross Reef, one of the best in the archipelago in terms of a combination of location and the potential for land reclamation. The atoll occupies an ideal spot at the western gateway into the Spratly Islands and is one of the few Spratly islands that are most exposed to the main transoceanic shipping routes passing through the South China Sea. Its location not too far from, but not too close to, the other island groups reduces its vulnerability and enlarges its sphere of influence. Adding to these advantages, Fiery Cross Reef occupies an area of 110 square kilometers, one of the largest in the Spratly Islands.

Four of the remaining five—Subi Reef, Gaven Reef, Johnson South Reef and Cuarteron Reef—lie at the edge of four different island groups, from where they can control a large maritime area and the key waterways into the Spratly Islands. The two land features that China later added to its possessions also boast immense strategic values. Mischief Reef, which China surreptitiously took from the Philippines in late 1994 or January 1995, lies at the center of the eastern wing of the Spratly Islands and close to the water highways that run along the eastern South China Sea. Scarborough Shoal, which China captured in 2012 with the help of small-stick and double-dealing diplomacy, presides over the northeastern quadrant of the South China Sea and is an ideal outpost to watch the major shipping routes through the region.

With its control of the Paracel Islands, Scarborough Shoal and several strategically located lands in the Spratly archipelago, China is far more advantaged than any other countries to command what Robert Kaplan has characterized as “the throat of global sea routes.” For example, Woody Islands (the largest feature in the Paracels), Fiery Cross Reef, Mischief Reef and Scarborough Shoal form a four-point constellation from which, with a radius of only 250 nautical miles, the entire main body of the South China Sea can be kept under intense watch.

This means that all it takes for China to become the lord of the South China Sea is to develop these assets into robust platforms that can provide both logistic support for a myriad of fishing boats, government vessels, submarines and aircraft to dominate the sky and the water of the region, and some grounds for generating large economic and security zones.

This is precisely what Beijing is doing. An uninhabited sandbank sixty years ago, Woody Island now has roughly 1,000 residents, military and civilian alike. Its dual-use facilities include a 2,700-meter airport with a runway and a parallel taxiway, which is capable of handling eight or more fourth-generation aircrafts such as SU-30MKK fighters and JH-7 bombers, and a 1,000-meter long deep-water port, which can accommodate vessels of 5,000 tons or more.

The most consequential of these island-building projects is on Fiery Cross Reef. From a naturally submerged atoll, Fiery Cross Reef will soon be the largest island in the Spratlys. After the current land reclamation, with an expected land area of 2 square kilometers, it will be four times as large as the naturally largest island in the archipelago, the Itu Aba, which is held by Taiwan. This expanded area will enable Fiery Cross Reef to host a 3,000-meter long airfield, a deep-water seaport, radar stations, several medium- to long-range missiles and other storage and service infrastructure capable of supporting hundreds of fishing boats, patrol vessels, warships and aircrafts.