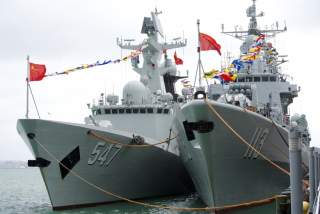 Professor Shi’s image of an army on the march, carefully consolidating its position after new territory is gained, is only the latest in a long line of metaphors used to depict China’s recent expansion in maritime East Asia. Most are products of American minds. They range from the sartorial to the salacious. Some, like “salami slicing,” are standard terms used by political scientists for decades. Many will doubtless serve as fodder for future scholars seeking to understand both the observers and the observed.

Almost all of these metaphors are descriptive. That is, they are largely based on analysis of patterns of behavior. As such, they shed little light on how Chinese policymakers may actually think about their options. To understand that, one must begin by recognizing the colossal contradiction that sits at the heart of China’s approach to its maritime disputes.

The Weight of Desire:

Chinese policymakers, citing “international law,” claim that the country is entitled to jurisdiction over three million square kilometers of ocean. However, so the Chinese narrative goes, nearly half of this “maritime territory” is contested by other states. With Taiwan quiescent, it is no wonder then that China’s disputes dominate the thinking of those who craft the country’s peacetime maritime strategy.

When formulating maritime dispute strategy, Chinese leaders are torn by two conflicting desires. These might be imagined as the two ends of an equal-arm balance. The first desire is to regain “lost” islands and waters controlled or contested by foreign states. The second is a desire to maintain stable relations with these same states and with the “global hegemon” (i.e., the U.S.)—a condition deemed essential for the number one objective of China’s grand strategy, economic development. Chinese policy, then, should be understood as a function of how Chinese policymakers balance these two desires.

This metaphor is not original. In a 2013 paper, Chinese Academy of Social Sciences (CASS) researcher Zhang Jie looked at the evolution of Chinese dispute strategy and identified three discrete periods. The first period, lasting until 2009, she calls the period of keeping a low-profile, when China self-consciously strived not to let its claims harm relations with other states. In 2010 and 2011, what Zhang labels the period of policy oscillation, Chinese leaders sometimes took assertive action and sometimes showed restraint, with policy swinging back and forth like a pendulum.

Phase three began in 2012 and continues to the present. Zhang calls it the period of proactivity.  In her view, changes in observed behavior across these three periods were a result of Chinese policymakers altering their judgments about the relative importance of advancing and defending China’s maritime claims—called “rights protection” (weiquan)—and maintaining stable relations with its neighbors and the U.S. (weiwen).

Evidence from the Real World:

Unfortunately for the reader, Zhang does not bear out her theory with empirical evidence. A close analysis of the available record, however, does validate Zhang’s thesis. Indeed, Chinese policymakers have long conceived of dispute policy in terms of rights protection and stability maintenance. Moreover, the desire for stability is often explicitly linked to the so-called “period of strategic opportunity,” a concept referring to the first two decades of the 21st century during which China can expect an international environment generally congenial to its economic development.

As early as March 2009, but probably earlier, the Chinese Communist Party (CCP) issued “strategic guidelines” that called for managing these two contradictory desires. Since at least 2008, the concepts have appeared in authoritative statements on China’s maritime policy, above all in sources associated with the State Oceanic Administration (SOA). But the rights/stability construct also appear in documents drafted by the Ministry of Agriculture, which until recently oversaw China’s Fisheries Law Enforcement (FLE) force, a major actor on China’s maritime frontier. The 12th Five Year Plan for Fisheries Development (2011-2015), for instance, calls for the increased presence of FLE ships in “sensitive” (i.e., disputed) waters while pointing out the need to “appropriately handle the relationship between rights protection and stability maintenance.”

This construct also appears in expressions of military strategy. In a June 3, 2010 article in the PLA Navy’s official newspaper, head of navy Admiral Wu Shengli called for the service to “research the question of planning and organizing naval operations and deployments on the basis of the guidelines of ‘unifying rights protection and stability maintenance’… We must succeed in both resolutely protecting our rights and actively maintaining stability…” Most recently, the need to balance rights and stability was highlighted in the 2015 white paper on China’s military strategy. These, then, are concepts with real currency within the organizations responsible for formulating and executing Chinese maritime policy.

In 2012, Chinese policy became much more assertive, both in the South China Sea—most dramatically with the seizure of Scarborough Shoal—and in the East China Sea, with augmented law enforcement presence near the Senkaku/Diaoyu Islands. Chinese leaders signaled this policy shift through their public statements, in particular, how they spoke of “rights” and “stability.” At the July 2012 World Peace Forum in Beijing, Xi Jinping said that regional stability was a laudable aim but it would only be pursued “on the foundation of resolutely defending state sovereignty, security, and territorial integrity.” Ostensibly echoing this new tone, SOA Director Liu Cigui wrote in a November 2012 article that finding the right balance between rights and stability was important; however, the “precondition” was that China would have to “safeguard national territorial sovereignty and maritime rights and interests.” In other words, “rights” were to receive greater priority than they had in the past.

The most definitive public acknowledgment of this shift took place in 2013. On July 31st of that year, the CCP held a Politburo meeting entirely devoted to the topic of transforming China into a “maritime power.” They invited two experts—one from CNOOC (of South China Sea oil rig fame) and one from SOA—to brief them. After their presentations, Xi Jinping offered his own views on the key elements of China’s maritime power strategy.

Xi called for “four shifts” (sige zhuanbian), i.e., four changes to policy. Three of the four shifts involved questions of the role of the ocean in China’s economic development. Xi’s fourth shift identified the need for a new balance between rights and stability. His choice of words implied a judgment that in the past China had attached too much importance to stability, to the detriment of rights. In the days following the Politburo meeting, Chinese experts dissected Xi’s remarks in articles published on the front page of SOA’s newspaper, China Ocean News. Peace and stability were important, they concluded, but in the final analysis China’s “rights” were more important.

Perhaps the most lucid description of this shift can be found in a feature article published in a July 2014 issue of People’s Daily.  The article cites Chinese academic Jin Canrong, who, echoing Xi’s language, points out, “For a fairly long period of time, our approach in the maritime domain was to prioritize stability maintenance. When another state infringed on our maritime rights and interests, we would usually choose to tolerate it, for the sake of safeguarding regional stability. But now, on the path to becoming a maritime power, we must consider both rights protection and stability maintenance.”

The rights/stability balance is not static. In an important January 2014 speech, SOA Director Liu Cigui highlighted the importance of maintaining a “dynamic balance” between these two objectives. Although 2012 was a year of fundamental shift, Chinese policymakers continue to make micro-calibrations in light of the responses of other states. Beijing’s decision to cease its blockade of the Second Thomas Shoal may be an example of this type of adjustment.

Placing a Hand on the Scale:

If the equal-arm balance is the best metaphor for understanding Chinese dispute strategy, and if we are in the age of weiquan, what does this imply for American policy? The rights/stability model suggests the repercussions of inaction. Chinese policymakers have plainly concluded that their current approach allows them to behave more assertively than in the past without harming stability to an unacceptable degree. They will likely continue to favor “rights,” wherever and whenever possible. It would be irrational for them not to.

Given the special attributes of the sea as a medium of conflict, there is a tremendous amount that China can do without resorting to the use of military force. The ocean cannot be garrisoned; if it is to be controlled, it must be patrolled. Most other disputants are simply not up to the task. China has the fleet and—after island construction in the Spratly Archipelago is complete—the bases to enable constant presence. Expect, then, increasingly vigorous efforts to act as the arbiter of maritime activity in disputed waters, especially in the South China Sea.