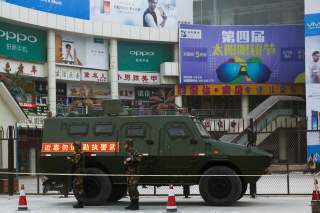 Chinese President Xi Jinping has proclaimed that his signature “Belt and Road Initiative” (BRI) that seeks to link the Chinese economy with the major continental and maritime zones of the Eurasian continent will “benefit people across the whole world,” as it will be based on the “Silk Road spirit” of “peace and cooperation, openness and inclusiveness.” The lived reality of the people of the Xinjiang Uyghur Autonomous Region—the hub of three of the six “economic corridors” at the heart of BRI—could not be further from this idyll.

Rather, China has constructed a dystopic vision of governance in Xinjiang to rival that of any science-fiction blockbuster.

Xinjiang’s geopolitical position at the eastern edge of the Islamic and Turkic-speaking world and the ethno-cultural distinctiveness of its largely Turkic-Muslim ethnic groups such as the Uyghur have long constituted a challenge to Chinese authorities.

The Chinese Communist Party has since 1949 pursued a strategy of tight political, social and cultural control to integrate Xinjiang and its people into the People’s Republic of China (PRC). This has periodically stimulated violent opposition from the Uyghur population who chafe against demographic dilution, political marginalization and continued state interference in the practice of religion.

“Stability” in Xinjiang is however now a major strategic imperative for the Party, driven by periodic terrorist attacks in, or connected to, Xinjiang by Uyghurs that Beijing blames on an externally-based organization, the “Turkestan Islamic Party” (TIP) and the region’s role as hub of key elements of the BRI.

This obsession with “stability” in Xinjiang has seen the regional government’s expenditure on public security balloon, with provincial spending on public security in 2017 amounting to approximately $9.1 billion—a 92 percent increase on such spending in 2016.

Much of this expenditure has been absorbed by the development of a pervasive, hi-tech “security state” in the region, including: use of facial recognition and iris scanners at checkpoints, train stations and gas stations; collection of biometric data for passports; and mandatory apps to cleanse smartphones of potentially subversive material.

This system is not only reliant on technology but also significant manpower to monitor, analyse and respond to the data it collects. Its rollout has thus coincided with the recruitment of an estimated 90,000 new public security personnel in the region.

This is consistent with the Party’s move toward tech-driven ‘social management’ throughout the rest of China. However, in Xinjiang it has become defined by a racialized conception of “threat” in which the Uyghur population is conceived of as a “virtual biological threat to the body of society.”

From government officials describing Uyghur “extremism” as a “tumour” to equating religious observance with a virus, the Party’s discourse frames key elements of Uyghur identity as pathologies to be “cured.”

The Party’s “cure” for such pathologies is a programme of mass internment of Uyghurs—perhaps up to one million people according to some estimates—in prison-like “re-education” centres based on analysis of the data harvested through its system of “predictive policing.”

Here, receiving a phone call from a relative studying or travelling overseas or attendance at a mosque can result in an almost immediate visit from local police and indefinite detention in a “re-education” centre.

The totalitarian regimes of the twentieth century—Stalin’s Soviet Union, Hitler’s Nazi Germany and Mussolini’s Fascist Italy—while divergent ideologically were united by their drive to make a “total claim” on the individual. “They were not content,” as historian Ian Kershaw reminds us, “simply to use repression as means of control, but sought to mobilize behind an exclusive ideology to ‘educate’ people into becoming committed believers, to claim them soul as well as body.”

The goal of China’s “re-education” of Uyghurs, according to a Xinjiang CCP Youth League official, is to “treat and cleanse the virus [of “extremism”] from their brain” and “restore their normal mind” so that they may “return to a healthy ideological state of mind.”

Under Xi Jinping’s leadership, China is thus arguably pursuing a “total claim” on the bodies and minds of the Uyghur people via a twenty-first century, technologically-enabled version of this—a “totalitarianism 2.0.”

Michael Clarke is Associate Professor at the National Security College, Australian National University, Canberra, Australia. He is an internationally recognized expert on the history and politics of the Xinjiang Uyghur Autonomous Region, People's Republic of China (PRC), Chinese foreign policy in Central Asia, and Central Asia’s geopolitics. He is the author of Xinjiang and China’s Rise in Central Asia: A History (Routledge 2011) and editor of Terrorism and Counter-Terrorism in China: Domestic and Foreign Policy Dimensions (Oxford University Press, October 2018).