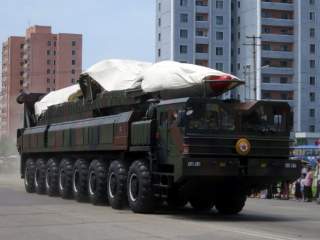 Even the promising trilateral meeting recently of South Korean, Japanese, and Chinese foreign ministers could not dispel the dark cloud over the Korean Peninsula. As the annual South Korea-U.S. joint military exercises got underway, Chinese news commentators discussed in detail which U.S. Air Force bombers deployed to Guam had which type of relevant nuclear payloads. Of course, there was also the disquieting news item that North Korea successfully launched a ballistic missile recently from a submarine – an event that hardly registered for the busy candidates in the U.S. presidential election contest. Meanwhile, this summer also witnessed significant protests in South Korea as Seoul announced that it would deploy Theater High Altitude Area Defense (THAAD) anti-missile systems over vocal objections from Beijing. Compared to various incidents involving fishing boats and coast guard vessels in the South China Sea, the Korean Peninsula might justifiably claim priority on the attention of strategists across the Asia-Pacific.

It is widely understood that the key dyad in the Korean Gordian Knot is Beijing’s tie to Pyongyang – a point underlined in this column more than once. With the conviction that U.S. leaders need to have the most complete possible picture of China’s approach to North Korea, this edition of Dragon Eye examines another “shot across the bow” from Beijing’s hot internal debate about its future relationship with Pyongyang that was published in an early 2016 edition of Northeast Asia Forum [东北亚论坛] by Wang Junsheng, a researcher of the Chinese Academy of Social Sciences (CASS). The paper is identified as the product of a “National Social Science Fund Project” [国家社科基金项目].

Wang is unusually candid in characterizing the North Korea debate in China in his article’s first paragraph as pitting the “abandon North Korea” [弃朝] line of thinking against those who maintain China must “protect North Korea” [保朝]. He does a bit of tracing of the origins of the “abandon North Korea” argument and mentions the previously influential (and subsequently discontinued) journal Strategy and Management [战略与管理] in this regard. He further explains that there have been two major waves of “abandon North Korea” sentiment in China: in 2002 after the “second Korean nuclear crisis” and then again during 2011 when Kim Jong-un assumed the reins of power in Pyongyang. Wang observes that it is hardly difficult to pull down some of the 65,000 results on the Chinese search engine Baidu if one searches for the phrase “China should abandon North Korea” [中国应放弃朝鲜]. Maintaining that Beijing must firmly reject the U.S. and South Korean policies that are premised on a “theory of North Korean collapse,” [朝鲜崩溃论] Wang’s article argues emphatically that Beijing must “further develop ties with North Korea … and send North Korea a clear signal.”

The piece is hardly oblivious to the burgeoning ties that have formed between Seoul and Beijing. The author notes that South Korea has emerged as China’s third largest trading partner. The point is made more than once, moreover, that Chinese President Xi Jinping has met directly with ROK President Park Geun-hye more than half a dozen times already and these two leaders evidently share a genuine rapport. Explaining that ROK-PRC ties are “the best in history,” Wang suggests that the relationship features “hot politics and hot economics” [热政热经] in an obvious contrast to China-Japan relations that are frequently characterized as “cold politics, hot economics.” By contrast, Wang observes that Xi Jinping and Kim Jong-un have not built a “personal relationship.” In a not too veiled critique of the current Chinese leader, the author notes that “Jiang Zemin, Hu Jintao and such Chinese leaders all visited North Korea multiple times.” He is disturbed by the tendency of Korean tensions to increase U.S. military influence in the region and emphasizes the threat to China’s security that could emerge from enhanced “U.S.-Japan-South Korean trilateral military cooperation.” He is critical of the gradual diminution of Chinese aid for North Korea in recent years. For Wang, the most fundamental foundation of the China-North Korean special relationship is not simply their shared ideological tradition, but more particularly the “blood alliance” [血盟] forged in the “War to Resist America.” In a passage sure to make American readers cringe, the author notes that North Korea’s then leader Kim Il-Sung was the very first head of state to visit after the “Tiananmen Incident” of 1989.

Of course, Wang assesses that North Korean nuclear weapons development violates Chinese national interests. However, he maintains that China should not accept the Western conclusion that North Korea is an “abnormal” [不正常] country. Rather, current problems on the Peninsula, according to Wang, are due to the policies of both the United States and also North Korea. The author suggests the best way forward is to employ the “balance of power” [均势] to uphold peace and stability. This means recognizing the continuing importance of the “special relationship” between Beijing and Pyongyang. And even as relations have rapidly improved between Seoul and Beijing, China must simultaneously strive to improve its relationship with North Korea. Wang seems to hold out the hope that a sort of turning point occurred in China-North Korea relations when Politburo member Liu Yunshan visited Pyongyang in October 2015.

The assessment is less than clear on practical steps to move forward with this proposed “rebalance” of Chinese strategy on the Peninsula. Left unsaid, as likely too sensitive, seems to be the explicit suggestion that Xi and Kim hold direct talks. Wang seems to recognize that North Korea is not at all popular with Chinese people generally, and he recommends efforts to limit the “smearing” [丑化] of North Korea’s image in the Chinese media. At the same time, he does mention “strengthening U.S.-China cooperation” among his suggestions. Regarding the nuclear issue, he says China should employ the strategy of “making the hard harder and the soft softer” [硬的更硬软的更软], a strategy familiar from the Taiwan context. Washington and Beijing cannot waver on denuclearization, he says, but suggests that the India-Pakistan approach to stabilization might be most practical. He advocates for developing North Korea projects for both the Asian Infrastructure Investment Bank (AIIB), as well as the related “One Belt, One Road” initiative. A peace treaty is recommended to replace the “ceasefire” that ended the Korean War. Finally, Wang says that the Six Party Talks are not capable of resolving the difficult issue of peace on the Korean Peninsula, and that China should perhaps promote an alternative structure.

An important caveat, to be sure, on the discussion above is that the article was most certainly completed by Wang before North Korea’s fourth nuclear test in early 2016. Still, if the thesis put forward in Wang’s essay represents a trend of thinking in Chinese foreign policy circles, that development could be rather disconcerting, of course. While he pays lip service to U.S.-China cooperation, the main thrust of the argument is plainly that China must give North Korea greater assistance, both economic and political, in order to “balance” against the pressure applied by the US and its allies. Such a new direction could presage a more polarized and competitive strategic environment on the Korean Peninsula in the coming decade.

However, there may be another way to conceptualize a strengthening relationship between Pyongyang and Beijing that actually favors U.S. interests. I have spelled out this logic in the spring 2016 edition of the North Korea Review, but the essence of the argument is that if we Americans want China to cajole North Korea to accept denuclearization, this can only realistically occur if the two uneasy neighbors across the Yalu actually share a much tighter relationship.