China's Hong Kong Headache: What Will Beijing Do about the Protests? 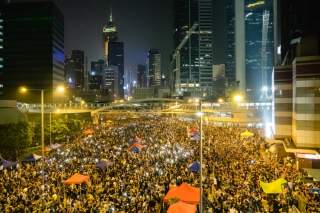 Hong Kong is one of the world’s most cosmopolitan cities. It is also, since 1997, part of the People’s Republic of China. For almost two decades, it has maintained its distinct character; and Beijing adhered to the well-known “one country, two systems” formula, enshrined in the Sino-British Joint Declaration of 1985 and the Hong Kong Basic Law.

Over the years, many critics have doubted Beijing’s sincerity in maintaining this structure, voicing strong concerns when leaders in Hong Kong or the Mainland appeared willing to encroach upon it, as when harsh anti-sedition provisions were included in a law tabled in 2003. After mass protests and widespread criticism, the law was withdrawn. Overall, though, Hong Kong’s system has worked remarkably well, fostering exactly the sort of stability and peace in and around the region that Chinese President Xi Jinping stressed in his remarks on Tuesday. Hong Kong, unlike Tibet or Xinjiang, has not been a place of unrest or discontent. Central leaders even pointed to Hong Kong’s success in efforts to cajole Taiwan into considering closer links with the Mainland.

This positive and promising situation is now in profound jeopardy. Many in Hong Kong have grown to resent what they see as the heavy-handedness of Chinese policies toward their city, especially in the wake of Xi Jinping’s rise to power. Many are also deeply unsatisfied with local leaders (most of whom are elected at best indirectly), whom they perceive as prioritizing either their own particularistic interests or those of Beijing over those of ordinary Hong Kongers. Conversely, Beijing’s patience has been strained with what it views as the Hong Kong people’s failure to appreciate their good fortune and accept their position as part of the People’s Republic’s centralist “system.” These divergent perspectives have come to a head in the last week.

Last weekend saw an explosion of popular protests in central districts of Hong Kong against both the region’s leaders and China’s perceived interference in the city’s affairs. This followed a week-long student strike at Hong Kong’s universities. It is not surprising that Beijing finds such manifestations audacious and objectionable. It is important to emphasize, however, that, to date, the protesters have gone out of their way to use nonviolent means when expressing themselves. They have engaged in nothing more than peaceful civil disobedience, a right explicitly protected in the Basic Law, Article 27, which protects “freedom of speech . . . of procession and of demonstration.”

Yet peaceful mobilization was met last weekend with ham-fisted attempts at repression. The widely reported use of tear gas, and other forceful anti-riot measures, against peaceful demonstrators last Sunday was simply deplorable. It violated international norms of human rights and may well have violated the Basic Law. Most importantly, it was politically counterproductive in that far from restoring the stability Hong Kong and China’s leaders craved, it helped galvanize much broader mobilization. While politics on the ground are complex and quickly evolving, the continuing large-scale, mainly peaceful demonstrations in Admiralty, Central and Causeway Bay on Hong Kong Island, as well as Mongkok and Tsimshatsui in Kowloon have made it impossible for anyone to pretend that all is well in Hong Kong.

It is unrealistic to expect China’s leaders to offer concessions that, from Beijing’s view, remain a bridge too far. But the world should expect Hong Kong’s leaders and the Chinese government to exercise continued restraint in handling the protests. It is also fair to hope that Hong Kong’s government might engage in more meaningful public dialogue and deliberation out of respect for widespread public sentiment—as C.Y. Leung’s administration hinted Wednesday just might be possible—and that leaders in Beijing might be more receptive and flexible in response than they have so far suggested.

We believe that Hong Kong’s people should be allowed to choose whatever electoral system they wish, and from abroad we can and do deplore the violent repression of their rights that their special “system” allegedly assures for them within their part of China. The international community can help to make those in power in China and Hong Kong aware of the unacceptability of the treatment protesters received last weekend and call upon them to avoid any further deterioration of the situation. Decisive repression in the form of a crackdown would be a tragedy for all concerned and would destabilize Hong Kong, Mainland China and the broader East Asian region politically, socially and economically.

No cataclysm erupted on October 1, National Day in the People’s Republic of China and a date of great symbolic significance for Beijing. Many had feared this date might see a tragic denouement of the current stand-off and actors on both sides must be commended for their calm and coolheaded behavior. Yet, no obvious progress was made toward de-escalation of the situation either. The danger of a rapid unraveling of conditions remains imminent, and may be particularly acute leading into this weekend, when we fear the government’s patience may flag just as protesters may become more intransigent.

Crushing the protests, broadcast live around the world, would be tantamount to China’s abdication of great-power status within the international community and erode any remaining semblance of trust from its democratic neighbors and regional partners. So far, Occupy Central is not June 4. But Hong Kong this week has looked ominously like Beijing in the spring of 1989. We remain optimistic that China today is not the China of twenty-five years ago, but it is imperative that such parallels do not develop further. That would be a tragedy for all and a great step backward, for both China and the world.

Ja Ian Chong is an Assistant Professor at the National University of Singapore.

William Hurst is an Associate Professor of Politics at Northwestern University.