China's Hong Kong Hustle Is Another Blow to Global Security 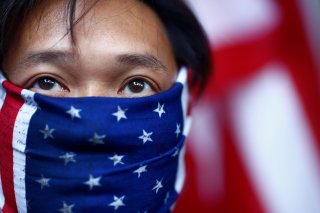 Xi Jinping is making his move on Hong Kong.

And why not? The timing is propitious. The White House had just released a new document titled: United States Strategic Approach to the People’s Republic of China. Xi needed a lifeline, a way to regain his omnipotence in the wake of coronavirus carnage and internal unrest. What better way than to crush the “one-country, two-systems” framework documented in the Sino-British Joint Declaration in 1984, and to deliver a sharp response to the new U.S. declaration? The 1984 agreement stipulated that upon Hong Kong’s reversion to China from Great Britain in 1997 the city would retain its capitalist economic system, currency, legal system, independent judiciary, legislature, human rights, and the freedoms of assembly and demonstration until 2047. That will all be gone, along with Hong Kong’s strength as a global economic, investment and trade center. Hopefully, the new document won’t become yet another dusty, forgotten archival document.

Xi likely calculates that any U.S. reaction will be bearable. We posed no substantive objection to China’s massive dredging operation to build more than three thousand new acres on top of semi-submerged features in the Spratly Islands in 2013. Xi himself declared then that China held “undisputed historical sovereignty” to the waters of the South China Sea, an area half-again larger than the Mediterranean. In 2015 Xi told President Obama that the new features would not be militarized. Now they include three-thousand-meter runways, deepwater ports, and defensive installations. Elsewhere in the South China Sea Chinese coast guard and maritime militia vessels harass the drilling and fishing operations of other countries, challenging our vision of a “free and open” region.

Sanctions on Chinese entities are likely, but if they are no more effective at convincing autocratic leaders to change course than our sanctions on North Korea and Iran, they pose no obstacle. We should certainly impose sanctions if only to indicate our displeasure. But they are a short-term political expedient. We can say we did something, especially if we add a mean-sounding modifier, such as “crippling.” Xi gains a short-term political expedient too. He will cite any sanctions to generate support against our “unjust action.”

Japan will certainly note Hong Kong’s subjugation as another blow to regional and global security. Korea’s restive electorate will develop more questions about our alliance. Other Asian nations, lacking comparable security institutions, will carefully calibrate their policies to avoid offense. In an earlier Cold War, it was called “Finlandization.” Democracy is in the decline in the region and globally for more than twelve years now. This will be another democracy, this one with a Chinese face, taken off the board.

Taiwan is most urgently at risk. The message of Hong Kong is obvious and chilling. Our reaction, and that of our allies, will be carefully watched and lessons will be drawn. Taiwan is like the Fulda Gap or West Berlin in an earlier era: key terrain that must be held.

The United States must ensure Xi bears more than rhetorical opprobrium and assorted sanctions. We must respond in a way that reverses China’s growing advantage in force and political coercion. The quickest, most effective response to China’s campaign is a strong setback to further expansion. We must renew our role as ardent advocate and defender of democracy and human rights, and strengthen our conventional deterrent. There are several components to this.

We are losing the information wars. It is not just the corruption of our elections, as bad as that is. Or Taiwan’s 2018 local elections and 2020 presidential election. It is the weaponization of social media, and we are nearly defenseless. Autocrats from China through Russia to the Islamic State and Iran flood the zone with destructive narratives and disinformation. The result is a well-documented decline of democracy around the globe over the last twelve years. We certainly have the technical ability to compete, but we lack a coherent message and a fact-based, ideals-based vaccination against disinformation.

This is fixable. In a doubly ironic twist, our deputy national security advisor recently delivered—on May 4—a powerful message to China and our own citizens. He spoke in Mandarin and eloquently described the Chinese May Fourth Movement of 1919 that supported democratic ideals and contributed substantially to the Universal Declaration on Human Rights.

Human rights are the most powerful component of our “brand.” It is a feature of our nation, not a bug. From 1950 through 1990 we were an enthusiastic advocate and defender of democracy and human rights. Our message was powerful and spoke eloquently to political prisoners and captive populations, discomfiting authoritarian leaders. Josef Stalin once asked, “How many divisions does the Pope have?” Poland’s Cardinal Wojtyła, known as Pope John Paul II from 1978, helped lead the Solidarity Movement of some 9.4 million people to gain Poland’s freedom from the Soviet Union. Stalin would have envied the Pope’s “divisions.”

China invests heavily in precision strike systems to hold our bases and ships in Asia at risk. China has long been building systems that exceed the Intermediate-Range Nuclear Forces (INF) Treaty range restrictions on short and intermediate-range missiles. China was never a party to that treaty, but we were. That treaty is no longer a governing directive. We need to quickly reduce China’s range advantage.

The United States grew comfortable over recent decades with our unchallenged control of the sea and the airspace over it. We could sail where we wanted and refuel our strike aircraft as often as we wished as they flew to and from their missions. As a result, we largely abandoned strike missiles and the range was not a design priority for our combat aircraft.

Brad Roberts, a former deputy assistant secretary of defense, now currently director of Lawrence Livermore National Laboratory’s Center for Global Security Research, was recently asked how he assessed the current missile capabilities of China and North Korea. His answer in part: “But when it comes to (land-launched) short- and intermediate-range missiles capable of striking Japan and U.S. bases elsewhere in the region, and U.S. forces at sea, the approximate current ratio is that China has approximately 1,900 such missiles and the U.S. has zero.”

Our bases and ships in the region are all within range. We need to enhance air and missile defense and we—and our ally Japan—need our own strike weapons to hold enemy launch positions at risk. No long development process is needed, we can purchase systems quickly from allies.

Adm. Phillip Davidson was recently charged to report directly to Congress on the needs of his command to fulfill the National Defense Strategy and maintain an edge over China. His report was titled “Regain the Advantage,” a more active verb and a more accurate description of our challenge.

He concluded that “The greatest danger for the United States is the erosion of conventional deterrence.” His proposal includes a Pacific version of the European Deterrence Initiative, serving the same purpose: discouraging China from aggression in Asia.

His report is detailed, logical, and realistic, with cost figures included. For a reasonable investment, perhaps shared with Japan, we can quickly realize powerful improvements in five integrated areas:

Even a pandemic-affected budget can afford to fulfill this urgently needed request.

Many respected voices charge that American military supremacy is no longer assured. New domains of conflict have been added to the more familiar air, land, and sea, with the count now reaching six or seven depending on viewpoint. The number and complexity of interactions across all of this increases exponentially.

Much of our current simulation efforts focus on relatively narrow objectives. What is needed, for us in company with our allies, is a concerted effort to develop mission—and campaign—level simulations across all services and all domains. This can generate valuable learning experiences without the associated butchers’ bill we endured at the beginning of past conflicts. Vulnerabilities of doctrine and weapons systems can be detected and remedied without the time and expense of flying, sailing, and marching.

Perhaps even more important, with proper simulation and an electronic linking of all our training facilities in the Indo-Pacific region, we and our allies can train high-level commanders and their staffs in the art and science of combined warfare, efficiently and effectively integrating the fires and maneuver of our forces to allow us to prevail despite adverse numerical odds.

Political power grows out of the barrel of a gun, according to one of Xi’s predecessors (Mao Zedong). Coercion and intimidation grow there too. Fulfilling our two objectives detailed in our most recent strategy document—to improve the resiliency of our institutions, alliances, and partnerships to prevail against the challenges the PRC presents; and to compel Beijing to cease or reduce actions harmful to the United States’ vital, national interests and those of its allies and partners—requires action this day.