China's Hong Kong Nightmare Is Back 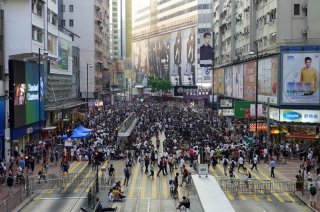 The Hong Kong government’s decision to scuttle proposed talks with representatives from the protest movement on the island that were originally scheduled to take place this weekend demonstrates just how uncertain, and potentially volatile, the situation there remains. Thus, this new development in what increasingly appears to be a long story is worthy of analysis, as it may prove to be an important turning point in this round of the conflict.

Earlier in the week, when talks were announced, they had the effect of taking quite a bit of air out of the protest movement’s collective balloon. In other words, even as some expressed skepticism about the sincerity of the offer, the initial announcement was seen by most as a way out of the dangerous impasse the two sides had reached. Most signs in the streets came down, and it seemed like it was time for everyone to go home.

With the threat of mass demonstrations dissipating, the bargaining position of Beijing and local Hong Kong officials vis-à-vis the protesters appeared to be strengthened. It is possible to surmise that this gave the powers that be the confidence to feel that they could now pull a bait and switch on the talks themselves. In short, this would seem to be a move of rather acute political gamesmanship.

However, such an interpretation of events suggests a level of policy coordination and cooperation, not to mention strategic foresight, that strikes me as quite extraordinary. Hong Kong is in the place it now finds itself because of policy dysfunction within the Special Autonomous Region, and heavy-handedness from Beijing, not due to adroit maneuvering by either party.

Is it possible that those in power have now become such skilled operatives that they can game out such a complex and unfolding set of variables? It is relatively safe to assume this is not the case. On the contrary, the abrupt policy reversals, shifts and inconsistencies in policy making are more the result of divisions and differences within the halls of power over in both Hong Kong and Beijing over how to handle the protests. Such infighting is then producing not a brilliant manipulation of the protest movement, but instead an incredibly confounding approach to the situation on the ground. In other words, policy is more a case of going left then right, forward then back, zigzagging to and fro, than it is one of an intricate, well-thought-out play. It more resembles the actions of the fabled keystone cops than those of thoughtful strategists.

This being the case, one might insist that there is, indeed, a degree of policy coordination, not dysfunction, in the decision to torpedo talks before they even begin. Within such a frame, it may also be argued that such a decision was a wise move on the part of the Hong Kong government. However, the short-term benefit of pulling the protests back from the brink earlier this week will be far outweighed by the long-term costs of an even greater erosion of trust on the part of the Hong Kong people toward those who govern them. It is certain to leave those who had already turned against the political power structure even more disaffected and less likely to compromise the next time that temperatures rise, while also generating broader sympathy for the protesters among the wider Hong Kong population. Reneging on the commitment to talks is then a move that could easily backfire.

However, before we rush to condemn the Hong Kong government, it should be noted that they are very much in what appears to be a no-win situation in dealing with the protests and China.

Satisfying the protesters would require concessions from the government on issues of governance and democracy that speak to basic issues of Hong Kong’s political structure. Beijing has clearly indicated that these types of considerations are nonnegotiable.

At the same time, China’s leaders have made it clear that they have a vested interest in seeing the protest movement shut down as quickly and efficiently as possible.

Making both sides happy is then not impossible, but perhaps close to it. In other words, if one was to draw up a Venn diagram of the two sides’ most preferred outcomes, the overlap between them would be just about nonexistent, with only a slightly larger space created by a consideration of acceptable, if not favored, ways to resolve the crisis.

It is my hope that there is still a way out of the current volatile impasse that has rocked Hong Kong, but I do not have a great deal of confidence that such an outcome will come to pass. It is then possible that the government will turn to a use of force to bring about an end to the protests—a move that could have catastrophic effects. What is more likely is that neither side will compromise, nor will they take bold action, but that the momentum behind the protests will falter and tensions will wind down. This may appear to some as a victory for those who support the political status quo on the island, but as it will leave the underlying grievances of the protesters untouched, it is certain that tensions will flare up in the city-state again in the not-so-distant future.