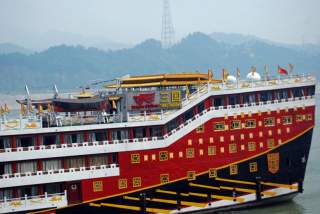 Having overbuilt in many domestic industries—such as coal, cement and even solar panels—the Chinese government is redirecting its capital abroad. The aim is to reduce excessive industrial capacity at home while increasing financial returns. U.S. policymakers ought to be watching this very closely.

One of Beijing’s most ambitious foreign economic development initiatives aims to recreate the legendary Silk Road. Nicknamed One Belt One Road (OBOR), the project wields plenty of financial muscle. It launched in February 2014 with $40 billion—mostly drawn from Beijing’s bountiful foreign exchange reserves.

Chinese companies have funded and built roads, bridges and tunnels across Central Asia, increasing trade and making China the dominant economic power in the region. In 2013, trade between China and the five Central Asian states (Kazakhstan, Kyrgyzstan, Tajikistan, Turkmenistan and Uzbekistan) totaled $50 billion, while the five states’ trade with Russia—previously the region’s top economic player—amounted to only $30 billion.

China has also redrawn Central Asia’s energy economics. Chinese companies now own close to a quarter of Kazakhstan’s oil production and account for well over half of Turkmenistan’s gas exports. Recently they signed $15 billion in gas and uranium deals with Uzbekistan.

China is also going global with its expertise in high-speed rail (HSR) construction. With more than twelve thousand miles of track laid, China has more HSR than the rest of the world combined. Now Beijing plans to build HSR networks connecting China with all of Southeast Asia.

South America will receive Chinese funding, as well. President Xi has pledged $250 billion over the next decade. This includes an HSR system spanning the Brazilian rain forest and traversing the Andean mountains. If that was not ambitious enough, Chinese business tycoon Wang Jing has announced his intent (though plans are currently stalled) to challenge the Panama Canal by building a $50 billion, 170-mile canal crossing Nicaragua. Last year, the Chinese news agency Xinhua announced that Beijing had already completed over one thousand projects in Africa, including 2,233 kilometers of rail construction and 3,350 kilometers of highway paving. In January of this year, China announced that it would help build a series of transportation grids (railroad, bridges and roads) linking fifty-four African countries.

To penetrate the struggling but affluent European market (China’s largest trading partner), China is financing the upgrade of the Greek port of Piraeus and a $3 billion bullet train from Belgrade to Budapest. Another network of rails, roads and pipelines, starting in the Chinese central city of Xian, will stretch westward as far as Belgium. Beijing has already started building an eight-thousand-mile cargo rail route between the Chinese city of Yiwu and Madrid. China is also in the lead for building a proposed HSR in California. Equally important, are the other financial institutions, either Chinese-based or initiated by China. The Asian Infrastructure Investment Bank (to finance infrastructure construction throughout Asia) has fifty-seven member countries. China plans to provide much of the $100 billion in initial capital.

Then there is the Export-Import Bank of China, which lent more than $80 billion in 2015. This dwarfs the Asia Development Bank, which lent $27 billion over the same period.

China also plans to build a $46 billion economic corridor—pipeline, rail, roads, bridges and more—through Pakistan. The goal is to establish a trade route connecting Gwadar, a port on the Arabian Sea, to northwest China. This enormous project is driven in part by Beijing’s desire to build additional routes for its energy imports from the Middle East—to lessen its dependence on sea routes.

Tehran has been most receptive to Chinese infrastructure projects, hoping it will help make Iran a key trading hub between Europe and China. Earlier this year, the first freight train from eastern China—traveling through Kazakhstan and Turkmenistan—completed the journey in just fourteen days, compared to forty-five days by sea. Sino-Iranian trade increased from $4 billion in 2003 to $52 billion in 2014, and Tehran hopes to boost that figure to $600 billion over the next decade. Naturally, the global infusion of Chinese capital has fostered some geopolitical tension as well. Moscow, for one, is far from pleased about losing preeminence in Central Asia, a region it had dominated for two centuries. China has built an oil pipeline from Kazakhstan and a gas pipeline that has allowed Turkmenistan to break its dependence on Russia.

The Chinese propensity to use their own labor on foreign projects has also prompted complaints in Africa and elsewhere that Chinese infrastructure investment primarily benefits Chinese contractors.. Though there is a paucity of official data, it is estimated that at least one million private Chinese citizens have arrived in Africa since 2001. But with economic growth sharply slowing in most developing economies, Chinese capital investment seems welcomed—at least for now—in most countries.

Beijing’s desire to “go global” should not necessarily be viewed as a threat to American interests but more of a challenge to be managed. China’s size and trading status is quickly reshaping the economics and geopolitics of Asia. To maintain American economic influence, Washington must stay deeply engaged in the world as well.

Image: The Yangtze River and boats staging for entry into the locks at the Three Gorges Dam. Flickr/Harvey Barrison