China's Latest Tussle With India Could Lead to War 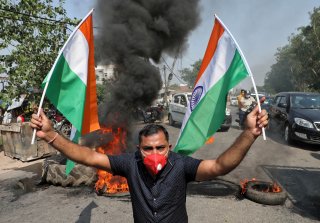 This week saw the most serious and deadly border clash between China and India in more than fifty years. It occurred in the Galwan River Valley located in a remote disputed mountainous region of Ladakh high in the Himalayas. At least twenty Indian soldiers were killed and many more injured. The body count is almost certainly higher because only New Delhi has publicly reported casualties while Beijing has so far refrained from providing figures for its dead and wounded.

What happened, why did it happen, and what’s next for Sino-Indian relations?

On the night of June 15, perhaps hundreds of Chinese and Indian soldiers engaged in hand-to-hand combat in the darkness. Chinese forces probably outnumbered Indian combatants at least when the melee started. Despite the significant casualty count, no firearms were used. By the terms of an earlier bilateral agreement—ironically intended to prevent deadly violence—neither side was armed with rifles or sidearms. Instead combatants brawled with fists, metal rods, wooden sticks, and stones.

The two sides first traded insults which elevated into a shoving match and eventually escalated into a full-blown brawl. This clash followed on the heels of other recent border skirmishes in early May, including a fistfight between border guards much further east at Nathu La near the small Indian Union of Sikkim, and another more violent skirmish also in Ladakh at Pangong Tso, to the south of Galwan, in which some Indian troops sustained injuries serious enough to require medical evacuation by helicopter.

The lethal June battle is both shocking and surprising: shocking because of the extreme intensity of violence and the casualty toll despite the absence of gunfire or mortar use; surprising because the murderous clash came as a bolt out of blue in what seemed otherwise to be a relatively stable China-India relationship. In recent years Chinese president Xi Jinping and Indian prime minister Narendra Modi appeared to be on cordial terms and committed to advancing bilateral relations and working through—or at least managing—an array of differences, including a complicated and enduring territorial dispute. The two leaders appeared to reach a common understanding about how to steady bilateral ties following a shirt-sleeves Xi-Modi summit held in Wuhan in May 2018 followed up by another informal summit seventeen months later when Modi hosted Xi in Mamallapuram.

Despite this high-level diplomacy, China-India relations have not warmed significantly, nor have border tensions dissipated. In the absence of actual negotiations aimed at resolving the disposition of disputed territory or even any progress toward more clearly demarcating the so-called Line of Actual Control (LAC). Multiple rounds of talks held since the 1980s have yet to produce any semblance of a breakthrough.

At the same time, neither China nor India have been content with the status quo and have been proactive in strengthening their holds on the disputed territories each control: both sides have actively engaged in building and upgrading roads in their respective frontier regions to improve military access. Moreover, China has become increasingly assertive and Chinese frontier patrols have routinely crossed the LAC. Meanwhile, India has sought not only to hold its ground but also to push back stridently against Chinese actions and incursions. In mid-2017, for example, New Delhi acted resolutely in the face of Chinese efforts to build a road in the disputed area of Doklam on the frontier that India and China share with the independent kingdom of Bhutan.

Although the actual deadly hand-to-hand battle in June 2020 appears to have been unplanned, border tensions have been rising as a result of Chinese disquiet over recent Indian road building efforts in Ladakh and immediately precipitated by Indian insistence that a Chinese tent encampment discovered on India’s side of the LAC be removed.

While the June 2020 bloodshed is the most serious border incident in decades, there is a distinct possibility that it will be quickly dismissed as a complete aberration or soon become a non-event as the attention of the United States and the rest of the world shifts elsewhere. As shocking as this incident may be, it is not a “made-for-CNN” crisis with available eye-catching video footage. Indeed, the Himalayan rumble is easily eclipsed by events on the Korean Peninsula where North Korea’s demolition of a multi-story building paid for by South Korean funds located just north of the DMZ—with the collapse conveniently caught on camera—occurred during the same twenty-four-hour news cycle.

Yet, it would be a mistake to dismiss the bloody Sino-Indian clash as something that is likely to quickly blow over or soon be ignored. It is true that neither Xi nor Modi desire a downturn in relations. They both seek to maintain stable frontiers and continue mutually beneficial economic relations. Thus, it is not surprising that the two sides are talking and both Beijing and New Delhi are publicly urging restraint. Chinese foreign minister Wang Yi and his Indian counterpart, Minister of External Affairs S. Jaishankar, spoke by telephone within forty-eight hours of the deadly confrontation. While both men counseled calm, each side pointed the finger of blame at the other. Jaishankar accused China of “pre-meditated and planned action,” while Beijing issued a statement accusing India of “deliberately” instigating the violent episode.

This latest Sino-Indian bloodletting has rekindled a smoldering ire among many Indians who harbor a longstanding grudge against Beijing for a series of perceived slights over the decades dating back to the military defeat China inflicted during the 1962 border war. Hence, the murderous clash of 2020 became headline news in India and has been extensively covered by the country’s lively independent media, provoking genuine popular outrage. By contrast, in China coverage of the incident has been virtually non-existent in the state-controlled media aside from comments by a Foreign Ministry spokesman and few references in a prominent Chinese Communist Party-funded tabloid—the Global Times. Most ordinary Chinese do not know anything about the incident. The upshot is significant domestic pressure on Modi for a muscular response, but no comparable pressure on Xi.

Sino-Indian ties seem destined to remain awkward and tense for the foreseeable future but both Beijing and New Delhi will work to avoid escalation and a poisoning of the overall relationship. Indeed, both Xi and Modi are preoccupied with difficult domestic challenges, including battling coronavirus outbreaks and managing major economic problems.

Nevertheless, further Himalayan rumbles are all but inevitable since each side will continue to vigorously advance their territorial interests while refusing to give any ground. How local commanders and troops handle themselves will determine the scope and intensity of these confrontations, but the ultimate responsibility lies with leaders in Beijing and New Delhi.

The United States can ill-afford to see a further escalation of hostilities along this disputed border for a range of compelling reasons. It is the midst of extremely fraught negotiations with China on a comprehensive trade deal. Under these circumstances alone there are limits to which it can tip its hands. Nor can the United States, contrary to President Donald Trump’s feckless offer, help mediate this dispute. Both India and China have a neuralgic hostility toward third party intervention in their bilateral affairs. The best that the United States can do is to firmly counsel a return to the status quo ante and urge the two sides to seek an amicable resolution to this tortured conflict.

Andrew Scobell is Donald Bren Chair in Non-Western Strategic Thought in the Krulak Center at Marine Corps University. He is on a leave of absence from the RAND Corporation.

Sumit Ganguly is Distinguished Professor of Political Science and holds the Rabindranath Tagore Chair in Indian Cultures and Civilizations at Indiana University, Bloomington.