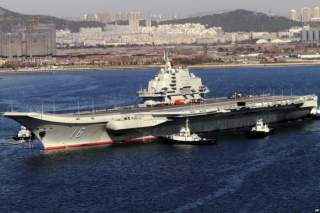 I witnessed the “bingo field” imperative firsthand when deployed as a Regional Security Education Program Scholar aboard USS Nimitz (CVN 68), Carrier Strike Group 11, during a Composite Training Unit Exercise (COMPTUEX) transit in 2013. I boarded Nimitz in San Diego. For the next three days we steamed rapidly to the Hawaiian Islands. While it was my responsibility to give lectures to all major departments on the carrier over the course of nine days before departing on a Grumman C-2 Greyhound for Hickam Air Force Base, for the first three days I had to devote primary focus to the aviators. They were a captive audience during this time; once we reached the Hawaiian Islands and their multiple airfields, the aviators and crew supporting them had to shift their attention to flight operations. Bottom line: flight training could take place safely because there was a “bingo field” nearby.

Even with its current economic headwinds, China is developing rapidly. Its navy and other maritime forces are no exception; China is truly going to sea. But Chinese development remains uneven, and its contours matter. The PLAN already has a similar number of ships to the USN, but it is of a somewhat different composition. Thanks to a lack of overseas bases, it is of a markedly different disposition. China’s burgeoning Coast Guard and obscure Maritime Militia accentuate these geographic and organizational disparities further still. As the serious but slow progress of Chinese aircraft carrier development reflects, all aspects of Chinese seapower are evolving, but are having a far more direct impact on the regional situation than the global order—even as they are influencing both. All the more reason not to “mirror image” and assume that an increasingly capable China is poised to conduct American-style naval air operations over Syria—or even that it will rely on its navy to head the push for advantage in the South China Sea, when it has more paranaval vessels and fishing trawlers capable of coordinating deftly for national purposes than any sea power in history.