China's Maritime Creep Could Create a Crisis for Japan 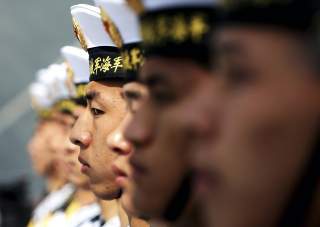 This latest submarine episode is no different, except that the choice of capability employed by China to emphasize its own version of “freedom of navigation operations” was peculiar. A Japanese government source suggested that the Chinese submarine defied warnings and “likely sailed the route aware of the likelihood that it would be detected.” This should not have been a far-fetched statement, for the MSDF together with its American ally has been honing its anti-submarine warfare (ASW) capabilities in the East China Sea and Sea of Japan for decades.

Indeed, an overt display of gunboat diplomacy with a submarine would be a departure from what customarily had been a surface warship’s mission that is designed for visual effects. It also defies the very traditional hallmarks of a submarine—lurking in the depths unseen, stealthy and conducting covert missions in times of peace until armed hostilities commence. Moreover, the boat in question was no ordinary submarine, but nuclear-powered and armed with long-range cruise missiles, altogether constituting a highly offensive and potentially destabilizing platform of choice. As such, the latest submarine foray represented a clear intent of Beijing to up the ante.

Going by trajectory of past events and the way Beijing’s maritime activities gradually creeps deeper into the Senkaku/Diaoyu waters and with increasingly destabilising weapons, there is a possibility that surface encounters would extend to the underwater dimension, which runs the risk of China normalizing submarine movements close to the isles. The future trajectory of events that may unfold does not seem assuring.

During the November 2004 intrusion into Japanese territorial waters off Okinawa, the Chinese submarine in question was an old, noisy Han-class nuclear-powered boat. Given that Beijing regards waters surrounding the isles as sovereign, a repeat of the 2004 incident cannot be discounted. Moreover, newer classes of PLAN boats are “quieter,” which may embolden Beijing to undertake riskier ventures. This could motivate Japan to ramp up ASW measures in the area, resulting in militarization of the dispute. Such measures may include deploying ASW assets to the area, and intensified training exercises in this field with or without involvement by other friendly naval powers.

More ominously is the likelihood of drastic countermeasures Japan may undertake if push comes to shove. If history is anything to go by, some of the underwater “cat and mouse” encounters documented during the Cold War and in recent times ended up in mishaps—involving the loss of lives on board the submarines—and diplomatic uproar. The last thing Beijing and Tokyo desire would be an inadvertent submarine incident off the Senkaku/Diaoyu Islands.

If history serves as a reminder, the USS Gudgeon incident, which took place off Vladivostok in August 1957, could be illustrative. Hounded by Soviet ASW forces and without safe means to recharge its batteries, the American submarine was compelled to stay submerged until oxygen was exhausted. Faced with a fouling internal environment and crew survival on the line, the commanding officer took a risky gambit by opening the outer doors of the torpedo tubes—signalling to the Soviet pursuers that it was primed and ready to shoot—and was finally allowed to leave the area unscathed.

A cornered submarine pestered by persistent ASW adversaries could potentially adopt the same drastic measures as the Gudgeon. While a nuclear-powered boat has virtually infinite submerged endurance, a technical problem could still paralyze its ability to evade its pursuers. Beijing may possibly also deploy diesel-electric powered submarines like the Gudgeon, despite the added benefit of an air-independent propulsion which could only extend for a period, not infinitely, its submerged endurance.

Given the prospect of a potential submarine incident off the Senkaku/Diaoyu Islands or in the East China Sea generally, it would be contingent on China and Japan to hasten efforts on the proposed maritime and air crisis-management mechanism that has been stalemated for years since 2012 without a conclusion in clear sight. The closest to this objective came after both countries agreed in principle to promulgate the mechanism during their eighth round of high-level consultations on maritime affairs in Shanghai, in December 2017. But this could well be a repeat of the same old pattern—both countries would reach agreements but still short of promulgating the mechanism.

It is highly plausible that Japan would raise the submarine episode in the next round of high-level maritime affairs dialogue with China. Given the latest submarine foray, there may be an imperative to revisit the original provisions designed for this mechanism, by considering an underwater dimension to prevent or mitigate a submarine-related incident off the disputed isles. However, this could prove to be a big problem. One of the factors that deadlocked progress towards the crisis-management mechanism has been Japan’s reticence against including the Senkaku/Diaoyu territorial waters in the pact, which it feared would give Beijing a free hand to continue coast guard forays into the said zone so long Tokyo was notified.

Juxtaposed with the traditional sensitivity of submarine operations, the bid to incorporate an underwater component to the mechanism could be more complicated and difficult, if not impossible. To forestall further militarization of the Senkaku/Diaoyu Islands dispute through gradual deployment of such destabilizing assets as a submarine, the onus may be on both parties to exercise unilateral naval restraint in the absence of the proposed crisis-management mechanism.