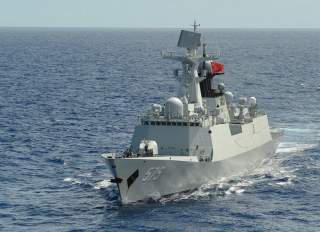 There is little doubt now that China has been assertive in the South China Sea for some time, particularly with regard to its ongoing reclamation projects. The biggest question that is being asked now is: what is the nature of China’s assertiveness? Is it reactive? Or is it expansionist?

To be sure, China’s ongoing island reclamation projects do not necessarily violate international law, as even Daniel Russel, assistant secretary of state for East Asian and Pacific Affairs, has noted. After all, all other countries have been doing exactly that for years now; and China is playing a “catching up” game here. Vietnam and the Philippines already possess airfields on islands under their control, and China soon will have its own airfield. It is a fair game.

Moreover, as one Filipino expert admitted, China’s ongoing reclamation projects are a response to the Philippines’ early confrontational approach toward China by filing an arbitration case against China. If there was any agreement and trust between China and the Philippines before that move, nothing was left after that provocative action. Hence China’s reactive assertiveness in the South China Sea.

China’s message seems clear. Given its power advantages, China is in no hurry to exert real control over the disputed islands. Negotiations and dialogues eventually will solve the disputes; and some will favor China while others will favor other claimants. After all, China has successfully settled territorial disputes with other countries in the last three decades, and in many cases China was satisfied with a second-best outcome.

But if other claimants want to take advantage of China’s distraction in the South China Sea because of pressing domestic problems, then they will realize their mistakes. Japan is a good example. By refusing to follow America’s wise advice not to nationalize the Diaoyu/Senkaku Islands, Japan gave China a good opportunity to enhance its claims and position with regard to the Diaoyu/Senkaku islands.

China’s strategy so far has been successful, though the future is still uncertain, particularly as the United States is now directly involved. The U.S. decision to be directly involved in the disputes seems to stem from the worry that China’s man-made islands would threaten freedom navigation and international commerce. Such worries are overstated for two main reasons.

First of all, as some have correctly pointed out, it would be suicidal for China to block international commerce in the South China Sea, mainly because China itself depends on the safety and stability of the South China Sea. Indeed, China would be the last country to disrupt the international commerce going through the South China Sea. If anything, it is China that should be worried about interruptions of its seaborne trade by other powers, small or big. This explains some of China’s deep-rooted worry of the so called the Malacca Strait dilemma, through which roughly 60 percent of China’s oil imports transits.

Second, China will not be able to launch serious military operations from those man-made islands even when they are finished. The physical structures of those man-made islands are simply too fragile to sustain substantial military operations. At most, they would serve as stations of logistic help and information gathering. China has not denied that some of the islands, in the future, could have some military functions. But the key is that China’s actions will be defensive in nature. Again, this is reactive assertiveness.

The biggest danger at the moment is the false belief on the part of the United States that China will back down if sufficient costs are imposed on it. Thus we have seen a flurry of reports and recommendations from respectable scholars that call for imposing costs on China, or essentially punishing China. By exaggerating the stakes and China’s threats to international peace and stability in the South China Sea, such recommendations might push the United States and China into an irreversible confrontation.

The truth, however uncomfortable, is that China will not back down if the United States intervenes directly. As a matter of fact, the United States has very limited options. Sending naval planes and ships into the 12 nautical mile zone of China’s islands is a strong signal, but an ineffective one in the end. It certainly will not stop China’s reclamation projects. Why bother then? Asking U.S. allies in Asia such as Australia to share the burden and costs will prove equally futile. Wise minds in Australia know better about the negative consequences of choosing sides between the United States and China.

In the end, all parties should avoid military confrontation and come back to dialogue. Of course, not all parties might be happy about this, but it is the only way to preserve stability and peace in the South China Sea, unless some powers do not want it in the first place.

Dingding Chen is an assistant professor of Government and Public Administration at the University of Macau and Non-Resident Fellow at the Global Public Policy Institute (GPPi) Berlin, Germany. His research interests include: Chinese foreign policy, Asian security, Chinese politics, and human rights. He can be found on Twitter at @ChenDingding.