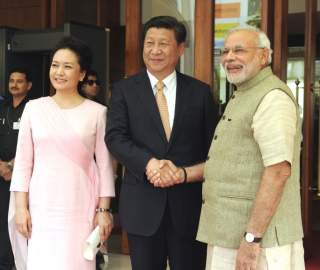 One of China’s overriding strategic goals is to thwart the U.S. rebalance of attention and resources to the Asia-Pacific region. At the twin summits of the Brazil-Russia-India-China-South Africa forum (BRICS) and the Shanghai Cooperation Organization (SCO) in Ufa, Russia, President Xi Jinping presented the outlines of the triple approach that Beijing will utilize.

The first is to backstop precipitous declines in Russian power. Chinese strategic analysts cannot help but be thrilled to have the leading members of the U.S. defense establishment proclaim that Russia is now the principal threat to the United States. Combined with announced cuts in the size of the U.S. Army, this portends well for thinning out any planned increase in the U.S. presence in the Pacific, because the focus now appears to be on a pivot back to Europe in order to shore up the precarious eastern frontiers of the Euro-Atlantic world. The lifeline that China has provided to the Russian economy—not only new contracts for energy and trade deals, but also the purchase of Russian bonds by Chinese financial institutions—has allowed the Putin administration to blunt the impact of Western sanctions and allowed Moscow to continue to maintain its position in Ukraine. China also benefits from a more anti-American Russia that is important for helping to secure China’s western territory by having Moscow guard Beijing’s backyard. Putin’s early flirtations with creating a strategic partnership with the West—including the post-9/11 offer of assistance to facilitate a U.S. military presence in Central Asia—were troubling to the Chinese, who have always feared the possibility of complete American encirclement. The Ukraine crisis has permanently ruptured Russia’s ties to the West and pulled Moscow into a closer relationship with Beijing.

The second is to keep India neutral. By itself, a U.S. pivot to Asia is insufficient to hold China in check. It requires an effective coalition of key regional partners who are prepared to build on the initial U.S. investment. Japan, America’s premier strategic ally in the region, cannot fulfill these requirements on its own. India has to serve as the western linchpin of a belt of states (including Vietnam, the Philippines and Australia) who are prepared to work together to balance China.

India is well aware of the strategic threat posed by China, but is also leery of being drawn in to fight America’s battles for it in the Pacific region. Xi has worked assiduously to engage Prime Minister Narendra Modi to try and tap down the irritants in the Sino-Indian relationship—not only the matter of the continued territorial disputes between both countries in the Himalayas (which led both countries into a short border war in 1963), but also China’s support for Pakistan and Beijing’s willingness to use its considerable economic leverage to induce Islamabad to be more constructive concerning India’s concerns about Kashmir and terrorist activities that emanate from Pakistan. The Chinese approach is to suggest that New Delhi and Beijing can work together to create a comfortable modus vivendi between both powers that does not require U.S. involvement—and to hint that India risks having Washington drag it into conflicts that do not serve New Delhi’s interests.

If China can start a “Shanghai process” with India—replicating the diplomatic efforts that settled Beijing’s outstanding border disputes with Russia and the Central Asian republics—it serves a third purpose: convincing other Asian states with whom China has territorial and maritime disputes that Beijing is willing to find diplomatic means to resolving conflict—as long as the United States is kept out. In addition, part of China’s outreach to the neighbors throughout Greater Eurasia is to convince them to hitch their plans for growth and prosperity to the “Chinese Dream” and to connect themselves to the new Silk Roads (both land and maritime routes) that will knit the region together—as opposed to the American vision of a Trans-Pacific Partnership. Via new institutions being created under the aegis of the BRICS and SCO, as well as organizations like the Asian Infrastructure Investment Bank (AIIB), where China and India are the two largest shareholders, Beijing offers to the countries of the rising Global South the ability to route around the established institutions that remain dominated by the Euro-Atlantic countries.

For both China and Russia, the optics of the Ufa summit bolster their rhetoric about ongoing geopolitical shifts in the world and enable Vladimir Putin to push back against a Western narrative that Russia is isolated. Coming off of a successful St. Petersburg Economic Forum where a number of leading Western business executives attended, despite the sanctions imposed on Russia, the Ufa meetings brought together the members, dialogue partners and observers of the BRICS and SCO—with more Eurasian states like Armenia and Azerbaijan formalizing relationships with the Shanghai grouping amidst talk that the SCO framework creates the basis for greater economic cooperation among the states of East, South and Central Asia without relying on European or American investment.

Yet China did not let the rhetoric in Ufa get out of hand. Beijing has carefully noted the extent to which Germany has become the donor nation to sustain the European Union, and is leery of assuming a Berlin-style role as the source of handouts and bailouts for the other BRICS and SCO members coming to Beijing with their hands out. The Ufa meetings did not settle some of the outstanding matters in the Russia-China economic relationship, including the final price for natural gas and the financing of some of the major infrastructure projects that were signed this past year. Moscow received no blank check from Beijing. The “New Development Bank” (NDB) and the currency pool, both critical items that Russia, cut off from Western financing, sees as crucial for its future development plans, were finally brought into existence—but China is likely to be very cautious in using these funds recklessly to prop up the Russian economy. China is also not particularly interested in turning the AIIB into a Chinese-funded piggy-bank for other nations’ pet projects. No major new infrastructure projects to be funded either by the NDB or the AIIB were announced at Ufa, even though the Indians brought some concrete proposals to the table about expanding the north-south corridor that links South Asia via Iran and Azerbaijan to Russia and Kazakhstan and thus to Europe.

Ufa did provide an opportunity for a face-to-face meeting between Modi and Pakistani prime minister Nawaz Sharif, which led to a joint communique on fighting terrorism and seeking resolution of some of the irritants in the bilateral relationship that could serve as the basis for a limited rapprochement. Shared membership in the SCO might also provide an institutional firewall to help contain ongoing Indo-Pakistan tension. Moreover, Modi, in his fifth bilateral meeting with Xi, raised a set of contentious issues. On the one hand, no breakthroughs were achieved in Ufa, but Modi and Xi agreed to keep talking, and to accelerate work on the commission charged with settling the boundary issues. As much as Washington likes to trumpet its good relationship with India, the reality is that Xi has made cultivation of India much more of a priority than Washington has. India and Pakistan are also now set to become full members of the Shanghai Cooperation Organization—which means that New Delhi has yet another institutional framework for conducting its relations with Russia and China in a forum that excludes the United States.

Nothing definitive was settled at Ufa—but the foundations are being laid for a fundamental shift in the balance of power in Asia. Washington can always hope that a massive slowdown in China’s economic growth, coupled with increased distress in the Russian economy, could bring many of these plans to naught. Beijing may also balk at paying the price for becoming the main purveyor of regional public goods. But Xi and Putin leave Ufa with positive momentum and a growing confidence that the correlation of forces in the global arena might be showing signs of breaking their way.