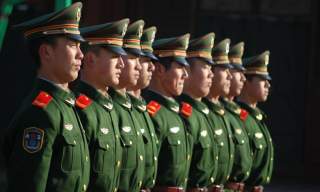 THE CHINESE armed forces are on the move—but to where? For over a decade, academics, policy wonks and government officials have been engaged in a relentless debate about Beijing’s military capabilities and intentions. To some, China is an expansionist country akin to Wilhelmine Germany. Others argue that while China’s assertive behavior in its regional island disputes is disconcerting, the Chinese Communist Party (CCP) is completely focused on domestic stability and therefore lacks global ambition.

This debate about current Chinese capabilities and intentions is widespread, fervent—and beside the point. While the Chinese leadership would prefer to stay focused on internal development and regional issues, facts on the ground will increasingly compel the CCP to develop some global operational capabilities. Specifically, the burgeoning need to protect commercial assets and Chinese nationals abroad will lead the country to develop some global power-projection capabilities, regardless of its current plans. Even though the Chinese leadership will embark on this path with very limited goals in mind, Chinese thinking on how and when to use force could change once its strategy, doctrine and capabilities evolve to incorporate these new roles.

While the People’s Liberation Army (PLA) will seek an increased global presence, this does not mean it will begin fighting major wars and stationing troops abroad. If we define global military power by the standard of the United States, no other country qualifies. Even the second tier of established military great powers—such as Russia, France or the United Kingdom—would probably not be able to sustain major combat operations outside their respective regions. The question here is not whether China would have the capacity to invade and occupy far-off countries, as only the United States can, but whether, like other second-tier powers, it will develop the capacity to project limited but meaningful force outside its immediate region.

Contrary to the extremes of the current debate, the Chinese military will be neither hollow nor a juggernaut. It will be neither a third-rate force confined to its region nor one that will embark on large-scale overseas combat adventures. Instead, over the next decade the PLA will likely develop certain capabilities designed to protect Chinese overseas interests. Personnel recovery, noncombatant evacuation operations (NEOs), and the ability to threaten other countries’ assets to coerce, deter, compel or punish will be some of the main objectives of a global PLA.

There are real obstacles—technological, political and ideological—to the Chinese military’s capacity to operate abroad, even on a limited scale. Scholars often point to China’s failure to resolve these obstacles today as proof that there will still be impediments tomorrow. True, the PLA’s experience with expeditionary operations has been limited. To date, China’s participation in the antipiracy efforts in the Gulf of Aden is the most notable example of the PLA conducting expeditionary operations. It is true that China currently has no bases abroad, no long-range logistics capabilities and only rudimentary satellite coverage. However, if motivated, China could have all of these assets by the end of the decade. At the turn of this century, the idea of China with an aircraft carrier or Chinese participation in peacekeeping operations seemed improbable. Today, the issue of a global expeditionary capability is already on the radar of the Chinese leadership. In 2013, for the first time, China’s Defense White Paper included a section on defending overseas interests—and it has already taken steps down this path. There are three big reasons Beijing is likely to pursue this course.

FIRST, IN the near future, economic motivations will drive the development of China’s limited global power-projection capabilities. Approximately twenty thousand Chinese companies have a presence abroad. Chinese firms operate in more than 180 countries and regions, creating a constant demand for government protection of these assets. Furthermore, Chinese overseas investment is growing. At $60 billion, China’s annual overseas foreign direct investment (OFDI) in 2011 was twenty times the 2005 amount.

Energy and real-estate assets in particular have a high risk of being seized or damaged in anti-China protests or as a result of political instability. Almost half of the total Chinese overseas investment is in the energy sector, reaching nearly $400 billion. Chinese overseas property investment is expected to exceed $10 billion this year, while the total value of overseas real estate owned by Chinese people is around $3 trillion. In 2013, Chinese property developers invested $7.6 billion in the overseas market, which was a 124 percent increase from the year before. Images of damage to individuals’ property could create a public outcry in a crisis that would be hard for Beijing to ignore.

As Chinese investments increase, threats to those assets will increase in tandem. This is especially the case in politically unstable countries where nationalization or seizure is always a possibility, or in countries that have ongoing territorial conflicts where anti-China protests have often resulted in damage to Chinese-owned property. While still a fledging phenomenon, some recent examples demonstrate why China might be driven to develop limited expeditionary capabilities to augment its response options. For example, in June 2007, a Chinese company from Shandong Province was attacked in Togo, resulting in nearly 150,000 renminbi of property loss. In 2012, local mine workers at a Chinese company in Zambia protested against delays in implementing a new minimum-wage bill and killed the manager. In February 2013, Zambia’s government seized control of a Chinese-owned coal company’s assets for failing to comply with safety and environmental standards. And in May 2014, Vietnamese protesters set fire to Chinese industrial parks and factories to protest against China’s claim in the South China Sea. A one-thousand-strong mob also set fire to a Taiwanese steel mill in Ha Tinh Province (most likely thinking it was Chinese), killing sixteen Chinese workers.

These incidents are occurring more frequently and are increasingly threatening to the CCP’s strategic and political interests. Statements made by Chinese political and military leaders acknowledge that China’s need for stable access to natural resources has expanded its interests beyond the region, while its capabilities lag behind. Wang Yi, in his first speech as China’s foreign minister, outlined trends and principles in foreign policy, highlighting the need to align China’s foreign policy with its expanding global interests. China’s 2013 Defense White Paper noted, “Security risks to China’s overseas interests are on the increase,” and included, for the first time, a section on protecting Chinese overseas interests. This document stressed the PLA’s role in safeguarding Chinese economic activity around the world, especially as “security issues [pertaining to] overseas energy and resources, strategic sea lines of communication (SLOCs), and Chinese nationals and legal persons overseas” are increasingly prominent.

The difference between China and many other countries is that the majority of investment is coming from the Chinese government directly or from state-owned enterprises. As one China watcher argued, “Investments abroad are much more important to Beijing’s long-term strategy than assertive posturing in long-running territorial disputes.” In this way, Beijing’s rapid OFDI growth has created a major political stake for China, even more so than for other countries. The close connection to the government will give the CCP an even greater incentive to develop the military capabilities necessary to protect these huge, high-stakes investments.

SECOND, AN increasing number of Chinese citizens are going abroad, with many migrating to politically unstable countries as part of an exported labor force or in search of financial gain. In the twelve months leading up to May 2014, Chinese nationals recorded ninety-eight million overseas trips—a number that has increased by ten million a year on average for the last four years. By 2020, that figure is expected to be approximately 150 million. These overseas Chinese, referred to as haiwai gongmin, expect their government to provide certain guarantees for their protection, known as haiwai gongmin baohu.

Domestic public support for the development of expeditionary capabilities is coalescing as more and more Chinese nationals find themselves in situations of danger due to misfortune or instability in their host nations. In April 2007, nine Chinese workers were killed and an additional seven were kidnapped at an oil field in Ethiopia; in 2011, four Chinese oil workers were kidnapped in Caquetá, Colombia; Chinese workers have been abducted multiple times in Sudan, with the most recent incident occurring in January 2013; and in May 2014, Boko Haram rebels from Nigeria kidnapped ten Chinese workers in northern Cameroon. Chinese nationals are also being targeted largely because of unpopular labor practices and general anti-China sentiment. Anti-China protests are on the rise overseas, with locals from Peru to Zambia upset over Chinese mining operations in their communities or human-rights abuses back in China. According to China’s Ministry of Foreign Affairs, its embassies and consulates deal with an average of one hundred incidents a day regarding overseas Chinese nationals in danger. Between 2006 and 2010, six thousand Chinese citizens were evacuated from countries in upheaval, and in 2011 alone, another forty-eight thousand were evacuated from Egypt, Libya and Japan. More recently, in June 2014, China evacuated about a thousand workers from Iraq as Islamic State militants took control of sections of the country.