China's Military Has a Discipline Problem. Here Is How Xi Jinping Is Trying to Fix It. 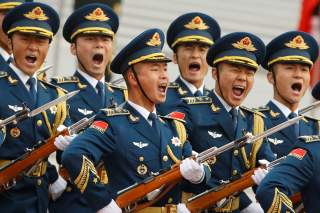 Among the most notable developments of China’s recently-completed 19th Party Congress was the reshuffling of the Central Military Commission (CMC), which exercises overall administrative and operational control over the two-million-strong People’s Liberation Army (PLA). Changes to both the individuals and organizations represented on the CMC suggest that Xi Jinping and his allies in the PLA continue to face problems in building a senior officer corps that is not only corruption-free, but also responsive to the Party’s (and Xi’s) dictates. Instilling discipline is critical to the PLA’s ability to achieve progress in its current cycle of reform and modernization, though problems such as malfeasance, bureaucratic resistance and the absence of civilian oversight could all hamper the prospects for success.

After he assumed the CMC chairmanship in November 2012, Xi outlined an expansive vision for a streamlined PLA that would be able to “fight and win” modern wars across China’s periphery, deter potential adversaries and protect China’s expanding global interests. However, Xi also recognized that achieving this ambition required a professional and politically reliable cadre of senior officers. This was problematic due in part to pervasive corruption, including allegations of improprieties in the logistics system and the buying and selling of promotions at the highest levels of the PLA. Even before Xi arrived, the PLA had begun a campaign to root out offenders. Xi expanded those efforts, resulting in more than 4,000 antigraft investigations and hundreds of officers sacked or reprimanded within two years. The most high-profile targets included Xu Caihou and Guo Boxiong, who both served as CMC vice chairmen under Hu Jintao and were implicated in the corruption of the PLA promotion system.

However, Xi’s problem extended well beyond the anticorruption arena. Just as insidious was the more parochial tendency of individuals and bureaucracies to protect their own vested interests (known colloquially as “iron rice bowls”). Resistance from within the PLA had stymied previous attempts by the civilian Party elite, led by Jiang Zemin and Hu Jintao, to reform the military. The ground forces—the PLA’s largest and arguably most influential service—remained dominant, and the four general departments (massive Soviet-inspired bureaucracies which operated as semi-independent fiefdoms) were left largely unscathed. This was especially problematic as Xi sought to reorient the PLA towards a greater focus on naval, air force, and missile capabilities, and reduce the number of redundant or noncombat-related staff, such as those inhabiting the general departments.

Beginning in late 2015, Xi and his supporters pushed through a number of structural changes designed to counter bureaucratic resistance. Most notable was a realignment of the organizations reporting directly to the CMC: the four general departments were downsized and placed under direct CMC supervision, while bodies responsible for internal policing were strengthened. That included new authorities for auditors, the discipline inspection commission (which investigates violations of Party regulations, including those governing corruption), and the military legal system, which were all previously subordinate to the general departments. Accompanying those changes were attempts to compensate the losers of reform. In a game of musical chairs, almost all senior officers were reassigned to appropriate positions throughout the PLA rather than being removed from duty. This reduced PLA resistance to the reforms.

Several changes to the CMC made at the 19th Party Congress aimed to build on the foundation laid earlier in Xi’s tenure, and ensure a more disciplined PLA leadership. First, Xi did not reappoint two key CMC members despite them not yet having reached normal retirement ages—Fang Fenghui, who as director of the CMC’s Joint Staff Department played a critical role in operations, and Zhang Yang, who oversaw the PLA’s political work system (responsible for personnel management and both internal and external propaganda). While foreign media speculated that both may have run afoul of anticorruption rules, it is also possible that one or both were dismissed for less dramatic reasons, such as poor performance or a poor working relationship with Xi. Their replacements, Li Zuocheng and Miao Hua, had been rapidly promoted since Xi took office (a signal of his confidence in their abilities).

Second, the chiefs of the navy, air force, and rocket force, along with the heads of the central departments responsible for logistics and equipment development, were removed from the CMC (the PLA army commander is a new position created in early 2016, and was never included in the CMC; previously, ground force affairs were collectively managed by the general departments). This change, which brought the CMC’s size down from eleven to seven members, meant that the services and the logistics and armament departments would no longer have an ex officio vote in major budgetary and personnel decisions, depriving them of a key source of bureaucratic leverage. Those officers would thus be in a weaker position to try to subvert the reforms, and would have to rely instead on arguments and relationships with more powerful officers who are CMC members.

Third, the director of the discipline inspection commission, Zhang Shengmin, became a CMC member. Zhang, a career rocket force political officer, assumed his role as the PLA’s top anticorruption official in March, having replaced Du Jincai—who himself was rumored to be an anticorruption target. Zhang’s CMC appointment underscored Xi’s emphasis on Party discipline, paralleling his reliance on former Politburo Standing Committee member Wang Qishan as his chief anticorruption enforcer for civilian Party members. The change also meant that the discipline inspection commission would now bureaucratically outrank the recently demoted services, and logistics and equipment departments, giving it greater clout to combat graft in those organizations. Xi thus emerged with a more potent anticorruption tool that he could use, along with auditing, prosecution, and personnel changes, to instill discipline.

The net result of these changes was to strengthen Xi Jinping’s position relative to the military, both because he has more effective tools to reward and punish senior officers and because he has been able to promote officers in whom he has more confidence to the most senior positions in the PLA. The use of the discipline inspection commission to investigate and punish retired officers—such as former CMC vice-chairs Xu and Guo—is also a warning that retired officers are still vulnerable if they try to challenge Xi’s decisions.

Despite Xi’s efforts over the past five years, including the recent CMC changes, the PLA’s senior officer corps will continue to face a variety of discipline issues. First, removing specific leaders such as Fang or Zhang will still leave in place many senior officers who purchased their ranks during the vice chairmanship of Xu and Guo. Xi may select officers reputed to be clean (such as new CMC Joint Staff Department director Li Zuocheng, whose alleged refusal to engage in corruption prior to Xi’s arrival purportedly slowed his career progress), and he could use a broader 300,000-man downsizing of the PLA—set to be complete by the end of 2017—to ferret out officers thought to be corrupt, and retain those believed to be clean and reliable. Yet because corruption was a systemic problem, Xi will still have to deal with many officers who arrived in top positions due to reasons other than professional competence.

A second issue is that downgrading the services and former general departments will not solve the problem of individuals and bureaucracies pursuing their own ends. Even during the height of Mao-era totalitarianism, local officials and governments often selectively implemented policies, provided inaccurate information, and avoided total control—a common expression from the period was that the “top has its measures, and the bottom its countermeasures” (上有政策, 下有对策). Xi should expect this pattern to continue in the contemporary PLA. The ground forces, for instance, may find ways to delay or offset budget reductions, while logistics officials may inaccurately report irregularities in the supply chain in order to retain lucrative relationships.

Third, although Xi has tried to empower different channels of control and supervision within the PLA, such as granting the discipline inspection commission more authority, the fact remains that China’s military is still essentially a self-governing organization. There is no parallel with the U.S. military, for instance, in which uniformed officers are subject to decisions made by a rotating ensemble of civilian political appointees, and must also be attentive to Congressional priorities given the legislative branch’s control of the budget and role in approving the promotions and assignments of senior military officers. Nothing Xi has done to date has changed the civil-military balance in China to grant more formal authority to the civilians. This could pose challenges to the extent that the PLA, as a corporate actor in its own right, tries to preserve its resources, avoid external scrutiny and resist Party directives.

This leads to a final point, which is that too much of the success of the quest to transform the PLA leadership could rest on Xi’s shoulders. Once Xi departs the scene, whenever that may be, there are no guarantees that the same problems that have hobbled the PLA’s progress over the last twenty years—especially pervasive corruption and bureaucratic intransigence—would not quickly reappear. This would not only weaken the PLA’s ability to “fight and win” modern wars, but also hinder its aspirations to become a “world-class force” by mid-century. Avoiding that outcome will require personnel and structural adjustments, but more importantly a PLA culture rooted in professional discipline rather than in self-promotion. Attacking that problem will be one of Xi’s greatest challenges, though success could count as one of his strongest legacies.