China's Military Is Upgrading Its Hardware (and Its People) 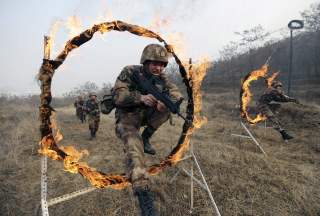 In the period leading up to the recently concluded 19th Chinese Communist Party (CCP) congress, civil-military relations in post-Reform China had previously been viewed under the lens of Party-army relations. More recently, however, such a paradigm—following Xi Jinping’s consolidation of the trifecta of Party-state-military power—no longer seems true, with some People’s Liberation Army (PLA) watchers alluding to a shift towards a model of Xi Jinping-PLA relations.

Notwithstanding that the PLA has supported its commander-in-chief in his consolidation of power in attaining his present unassailable position in the Party-state, the extent to which the CCP’s coercive forces can count on China’s new paramount leader to fully translate his considerable political clout into the former’s growing professionalization, however, is open to debate.

The general trend of China’s latest military modernizations has seen the PLA begin a nascent transition from an unwieldy Soviet-style command-and-control model, to a more flexible system entailing a more network-centric force that emphasizes the networked linkages among platforms—as opposed to the platforms themselves.

If it is still too early to gauge whether the PLA will successfully transform into a modern and networked-enabled force capable of projecting power across the Asia-Pacific region, the reforms instituted by Xi Jinping since becoming CMC chairman in November 2015—as well as his recently proposed enhancements to military theory and organizational structure—have undeniably moved the Chinese military closer towards that goal.

In accordance with Xi’s vision for his troops—enunciated at the 19th Party Congress—that the CCP’s armed wing basically modernize itself by 2035 and turn into a world-class force by 2050, the PLA has embraced the new operational concept of “informationized warfare” as well as continued to physically upgrade its forces to be on par with the world’s most advanced militaries.

With the passage of time, greater mechanization and informationization of the PLA—on the back of decades of strong economic growth and greater civil-military integration—will result in a better-equipped force, thanks to upgrades in communications and computing, as well as more advanced surveillance and reconnaissance systems. In sum, this means that the PLA will able to be deployed to combat theaters more expeditiously than in the past.

As the PLA transitions towards a more joint and informationized force, it becomes equally crucial, if not more important, that it also upgrades its “heartware”—the less tangible aspects of its development, including its operational culture and military ethos—to effect complementary changes to its organization, doctrine, and the training of its rank-and-file officers and members.

With authoritative commentaries in the PLA Daily stipulating that the key source of resistance to the military reforms “comes from within,” it becomes clear that the indictments of military “tigers” were partly to punish PLA leaders who had compromised CCP authority, but more importantly, to serve as a warning to the rest not to stand in the way of reforms.

But just as it had been politically expedient to limit the power and autonomy of PLA elites vis-a-vis the office of the CMC chairman, the recent reforms have also compressed the layers of command and administrative bureaucracy to empower the increasingly professional corps to conduct joint integrated operations more efficiently and effectively.

In the near- to medium-term, however, the PLA may well be confronted with even greater challenges to carry out the deeper “below the neck” reforms that extend beyond simply revising its operational and administrative structures. Indeed, any fundamental change to Chinese military “heartware” may well take a few generations to accomplish.

Xi Jinping’s ability to reject established Party succession norms, to be sure, can be attributed to the fact that the PLA has thrown its weight behind its civilian commander-in-chief in asserting himself against other Party elites—with Xi also having centralized politico-military power unto himself. In return, the CMC chairman has appealed to the PLA’s corporate interests by enhancing the status of the military profession and granting it pride of place in the CCP Party-state.

Following the crisis of legitimacy that had plagued the PLA during the period of decadence in which military malfeasance had been widespread—with some of China’s top soldiers going as far as disobeying legitimate civilian command of the previous commander-in-chief—Xi has since reshaped the establishment. He did so in his bid to exercise decisive influence over military affairs and, by extension, alter how the CCP and China are run.

Breaking military traditions and routines is clearly a formidable—if not an impossible—task. Moreover, further game-changing upgrades of PLA hardware may be impacted by slowing economic growth rates, which means the current robustness of China’s military-industrial complex cannot be taken for granted over the long term. Indubitably, the PLA is now at a critical phase of its evolution. Its success—or lack thereof—in effecting qualitative changes to both its hardware and “heartware” will determine whether Beijing will be able to deal with a greater number of contingencies and new missions further away from Chinese shores.