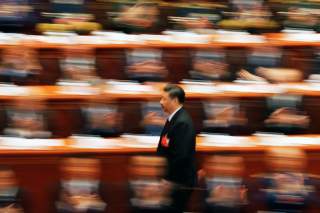 Most of the attention paid to China’s annual “two meetings” of its National People’s Congress (NPC) and Chinese People’s Political Consultative Conference has understandably focused on Xi Jinping’s accession to what appears to be a lifetime presidential appointment. But along with the removal of the two-term limit that had limited the tenure of all top Chinese leaders since Mao, a sweeping bureaucratic reorganization was announced that carries tremendous implications for China’s domestic and foreign policy. The proposed reorganization, which apparently has the support of the generally rubber-stamp NPC, includes creation of a new financial regulator, a new anti-corruption body, two new super-ministries focused on environmental protection and natural resource management and, perhaps most notably, a brand-new National International Development Cooperation Agency (NIDCA). This sudden bout of bureaucracy-building sends a strong signal to Chinese officialdom—but it’s unlikely to tackle the system’s deep-seated challenges.

The creation of new bodies for financial regulation and anti-corruption had been widely expected, given Xi’s ruthless campaign against graft among state and Chinese Communist Party (CCP) officials. Xi and outside experts have likewise expressed repeated concern about the massive debt held by China’s state-owned banks. Nonetheless, the creation of a new National Supervision Commission to combat corruption marks a major departure from past practice. Previously, allegations of corruption were investigated and handled by a CCP entity, the Central Commission for Discipline Inspection. The new commission will in contrast be a state entity, with the power to investigate any Chinese citizen. And while many experts rightly point to the increased threat to civil liberties, the new body also highlights the basic tension between state and Party institutions in China’s parallel governance structure.

China’s new super-ministries for environmental protection and natural resources, meanwhile, signal an expanded commitment to improving the country’s natural environment, hard-hit by forty years of break-neck development. This focus isn’t new: in 2014, Xi’s government declared a “war on pollution,” and took steps, like elevating the previously weak Ministry of Environmental Protection, to win it. But Xi signaled a decisive shift during the 19th Party Congress this past October, when he called for building a “beautiful China,” which appears to be a message directed at hundreds of millions of middle-class urban-dwellers fed up with air, water and soil pollution. The creation of these two new super-ministries appears to be an attempt to realize this objective, but it’s unlikely that the new super-ministries will themselves eliminate China’s siloed approach to policymaking, which makes it difficult to tackle complex, multi-sectoral issues like pollution.

The new bodies attempt to concentrate authorities and responsibilities previously distributed between multiple ministries; the new “Ministry of Ecology and the Environment,” for example, integrates powers previously spread between the Ministries of Environmental Protection, Agriculture, Water Resources and several independent agencies. This reform appears to address the well-known tendency for different ministries to jealously guard their bureaucratic prerogatives, refusing to share information or even to cooperate with their counterparts. But in reality, it’s impossible to completely concentrate all powers related to environmental protection and natural resource management in one entity, no matter how sprawling it is. The creation of super-ministries moreover doesn’t address the even more acute problem of central-local coordination: frequently, local officials prioritize growth over compliance with pollution regulations.

Perhaps the most eye-catching new agency, however, is NIDCA. The creation of a dedicated, independent entity dedicated to development signals a major break with past policy and China’s claim to great-power status. Few if any other developing countries have separate overseas development agencies, and to date Chinese overseas investment has been primarily commercial rather than concessional. The creation of NIDCA suggests that this may change: in announcing its establishment, State Council Wang Yong pledged to “give full play to foreign aid.” What is less clear, however, is whether NIDCA suggests a further marginalization of the Ministry of Foreign Affairs (MFA), already seen as a comparatively weak player. Wang specifically mentioned, for example, that NIDCA will assume MFA’s responsibilities concerning Xi’s signature foreign policy, the Belt and Road Initiative. The sidelining of the comparatively moderate MFA would be bad news, and likely presage a more aggressive Chinese foreign policy.

Yet for all their scale and ambition, China’s sweeping administrative reforms appear destined to entrench rather than expunge many of its bureaucratic pathologies. The creation of super-ministries, in particular, has a checkered history: a decade ago, five previous super-ministries were created to little effect, including the very Ministry of Environmental Protection now slated for further up-sizing. Little in this history suggests that the new reforms will produce much beyond altered organization charts. Real changes, like combatting the Chinese bureaucracy’s deep-seated aversion to inter-ministerial coordination, are unlikely to follow given Xi’s clear preference to centralize control and stifle independent initiative. Like so much else in Xi Jinping’s China, the bureaucratic reforms look impressive, but primarily serve the interests of its new president-for-life.

Scott Moore is a Senior Fellow at the University of Pennsylvania Kleinman Center for Energy Policy. He previously served in the Office of Chinese and Mongolian Affairs at the U.S. Department of State.