China's Missile Forces Are Growing: Is It Time to Modify the INF Treaty? 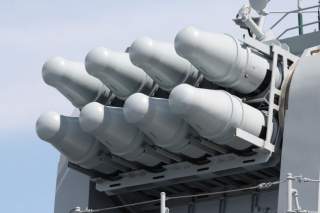 Arcane arms-control compliance issues rarely grab headlines. But the State Department’s next status report on the 1987 Intermediate Nuclear Forces (INF) Treaty might be an exception. INF bars the United States and Russia from testing and deploying most ground-launched ballistic and cruise missiles—whether nuclear-armed or conventionally-armed—with ranges between 500 and 5500 kilometers. According to press reports, though, Moscow has been testing a pair of missiles with intended ranges that might fall between these bounds, potentially circumventing or violating INF’s prohibitions. With relations between the United States and Russia already approaching rock bottom, the State Department can expect many eager readers on Capitol Hill.

If Moscow is violating the INF Treaty, it won’t just be a problem for Europe. It could also create fresh doubts about the Obama administration’s rebalance to the Asia-Pacific region. Before its troops infiltrated Crimea and instigated separatism, Russia appeared to be a source of frustration, but not a serious danger. In the post-Crimea era, however, the United States cannot assume that Europe will remain whole and free while China’s rise reshapes Asia, and a serious dispute over INF could further inflame the reemerging U.S.-Russia rivalry. Yet it could also create an opportunity for Washington to adapt an increasingly anachronistic agreement and shore up its military posture in the Western Pacific.

While the United States and Russia have been prohibited from fielding intermediate-range missiles (and many shorter-range missiles as well) for more than twenty-five years, other nations haven’t been so restrained—especially the People’s Republic of China (PRC). Beijing has amassed a sizable arsenal of missiles that would be proscribed under INF, including highly accurate road-mobile missiles that represent a serious threat to its neighbors, as well as significant danger to U.S. military facilities in East Asia. These missiles could someday pose a threat to Russia too.

For instance, if Taiwan reunified with the mainland one day, whether by choice or by force, Beijing might opt to relocate many of its missiles and target other rivals rather than reduce its inventory—and Moscow could be in its crosshairs. Despite their recent gas deal, tensions between Russia and China run deep. Not surprisingly, then, Moscow’s interest in getting out of INF is hardly new. Nearly a decade ago, senior Russian officials floated the idea of withdrawing from the treaty to their American counterparts. Neither side wanted to bear responsibility for abrogating the agreement, however, so instead they suggested that others join it—a proposal that was met with little interest in China or anywhere else.

As for the United States, it has a growing incentive to reconsider the types of weapons it gave up in 1987. American forces in East Asia are becoming increasingly vulnerable to China’s missiles, which could be used against the air bases and aircraft carriers that underpin U.S. power projection. Countering this threat with existing defenses alone (either active defenses like kinetic interceptors or passive defenses like hardened shelters for land-based aircraft) has the potential to be prohibitively expensive. Meanwhile, capabilities that might remain viable as China’s military power continues to grow (such as long-range bombers that are not tied to close-in bases and nuclear-powered attack submarines that can operate undetected in contested waters) are scarce assets that could eventually be tasked with more missions than they can handle.

Given these constraints, forward-based missile forces could be a partial solution to emerging operational problems in the Western Pacific. As the United States has learned the hard way on multiple occasions, mobile missiles are extremely difficult to locate and destroy, either from the air or from the ground. Ballistic missiles (given their velocity) and cruise missiles (if they are stealthy) can also be effective against a variety of targets, even if those targets are guarded by sophisticated air defenses. In short, ground-launched missiles could help to bolster crisis stability by preventing a situation where China believes it can deliver a serious blow against forward-deployed U.S. forces and ride out any retaliation.

How might Washington leverage current tensions with Moscow to improve its long-term military posture vis-à-vis Beijing? One option is to abrogate INF. Yet advocates and skeptics of the treaty alike agree that this would throw the baby out with the bathwater by removing any constraints on Russia’s ability to deploy prohibited missiles. Another option is to multilateralize INF by bringing China into the fold. Beijing still has nothing to gain by participating, though, and even more to lose than it did a decade ago thanks to the growth of its missiles forces.

A third alternative, which has not yet been discussed seriously, is to modify the treaty. For example, instead of maintaining a global ban on the types of missiles captured by INF, the United States and Russia might consider permitting the deployment of missiles in Asia but prohibiting them in Europe. In fact, during the original INF negotiations, Moscow wanted to retain some of its missiles in the East rather than destroy them all, but Washington ultimately wouldn’t agree. In the current strategic environment, however, an Asia option could allow both sides to counter China’s missile buildup—and ensure that relations between Beijing and Moscow don’t get too close at the same time—without completely upsetting the military balance in Europe.

Arms-control advocates would argue that this option isn’t viable. Verification of a modified treaty might become much more difficult. American allies in Asia might not want U.S. missiles on their territory or Russian missiles in the neighborhood. Allies in Europe might fear that any new Russian missiles will someday be pointed at them. And China could respond by rapidly expanding its own missile force to keep its numerical advantage.

All of these concerns would need to be taken into account. But they might not be quite as daunting as they seem at first glance. For instance, the ability to verify a treaty is not by itself a good reason to keep it. Moreover, if China’s military power continues to grow and Beijing continues to act assertively, allies like Japan and the Philippines might become more receptive to hosting U.S. missiles and more willing to tolerate Russian weapons that are aimed primarily at the PRC. For their part, NATO allies might have fewer qualms if the deployment of missiles in Asia enables Washington to station additional combat air forces in Europe. Lastly, while China could certainly build more missiles in response, it might not want to start an arms race with two great powers at the same time.

Perhaps most important, just the prospect of an amended treaty could put Beijing between a rock and a hard place, particularly if the blame fell squarely on its shoulders. On the one hand, it could do nothing and risk seeing its biggest military advantage erode. On the other hand, it could accelerate its military buildup and turn the rest of the region against it. With no good alternatives, it might be willing to head off U.S. and Russian deployments by negotiating limits on its own missile forces—perhaps not the comprehensive ban contained in INF, but some meaningful quantitative or qualitative caps. In short, the United States might gain a source of leverage that it does not currently have, one that could help create a more stable military balance in East Asia over the long run.

Evan Braden Montgomery is a senior fellow at the Center for Strategic and Budgetary Assessments.