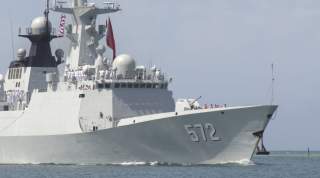 • land-attack and strike warfare, including from deck aviation assets

• acoustic quieting for submarines, to help them both survive being targeted in deeper blue-water environments and search more effectively without limitation by self-generated noise

China has started to pursue all these objectives, but it will take years before it fully accomplishes them.

The Cost of Chinese Sea Power

The imperative to understand and address the cost of Chinese and American sea power is one of the most complex and critical issues that our project has raised. A conference panelist with significant naval shipyard management experience explained that when maintenance, repair and overhaul are factored in, “You buy the boat three times.” China has been engaged in a rapid ship buildout akin to previous Soviet efforts. Like Moscow decades earlier, Beijing appears not to have prepared adequate supporting and maintenance infrastructure for in-service vessels, including sufficient numbers of capable dry docks and technicians. Yet the PLAN’s high operational tempo, as seen in its eight years and counting in the Gulf of Aden, is accelerating the process of its ships wearing out. Absent significant additional preparations, China faces a major reckoning in five to ten years when the mid-life maintenance bill for its new warships starts coming due. By then, programs initiated with alacrity in flush fiscal times will have entered a costlier phase, yet may command less robust discretionary funding amid growing national policy tradeoffs.

Overshadowing all this is China’s economic future, which appears increasingly subject to an S-curved slowdown in which pollution, resource depletion, corruption, an aging population, chronic diseases and mounting internal security spending compound to impose mounting costs. Collectively, these headwinds are likely to increasingly constrain the funds potentially available for military hardware procurement. This could make it hard for Beijing to sustain its present spate of capital-intensive warship procurement and operation.

Funding challenges have long bedeviled other nations developing and maintaining advanced navies. While countries tend to spend a constant percentage of their economic resources on their navies over time, a landmark study by Philip Pugh documents that the cost of individual warships and weapons—driven primarily by growing weight, power density and sophistication—has historically increased at 9 percent annually, far faster than inflation. At 2 percent inflation, this entails costs doubling each decade. Similarly, a RAND study calculates the cost growth rate for USN vessels over the past half century at 7–11 percent annually.

Navies can slow cost growth by downshifting some missions to smaller, simpler platforms. In an unusually dramatic example of such economizing, as well as to increase room for maneuver and deception, China is greatly expanding its coast guard to shoulder previous PLAN assignments, and—uniquely—is equipping elite maritime militia units assigned in part to promote sovereignty claims with larger, better vessels. Ultimately, however, navies typically sacrifice ship numbers to contain costs.

One alternative, rarely pursued, is to boost naval spending significantly. In this regard, American exceptionalism appears resurgent. By the unforgiving ratio of naval cost-to-economic-growth, among major world navies, India is entering a sweet spot; China is exiting a sweet spot; Japan, the UK, France and Russia have not enjoyed a sweet spot in years; and the United States is now attempting to reengineer a sweet spot with major additional investment in military shipbuilding.

The fact that China may be nearing the end of a particularly good run gives no grounds for complacency in American naval shipbuilding. First, there is a lag effect. Warships purchased competitively yesterday or today—price-capped in part by China’s relatively stable business and vendor base—can benefit Beijing for decades. Of course, as noted above, China’s large and growing new fleet will eventually face rapidly mounting maintenance and repair costs.

Second, to the extent that China loses its sweet spot, it could take a page from the Trump administration’s book and attempt to significantly increase prioritization and funding for naval shipbuilding. In theory, it could also attempt to regain a sweet spot of sorts by radically rethinking its land- and sea-based force structure and weapons systems. Such disruptive innovation is challenging, but that is exactly what China began to do in the late 1990s with megaprojects for “anti-navy” weapons such as antiship ballistic missiles (ASBMs), when it faced new threats yet had far less to invest in addressing them.

Third, there is a potentially revolutionary prospect: what if China can really “get its ships together” in its preferred manner by parlaying exceptional cost-competitiveness into exceptional quantity at sufficient quality? China is poised to remain the world’s foremost commercial shipbuilder by volume, and is working up the value chain in both civil and military domains. In doing so, it draws inspiration from multiple leading shipbuilders: in the commercial sphere, Japan and South Korea; in the military sphere, the United States, western Europe and Russia. China’s naval modernization has been greatly facilitated by an unparalleled organizational structure for collecting and disseminating technology, and integrating it into production processes at an industrial scale.

In part through this fast follower approach—building on a massive economy—China has or is developing formidable capabilities and capacities in all shipbuilding-relevant areas (including steel, aluminum, structural and dynamic engineering, electronics, electrical power systems, engines—albeit with European licensing and Russian and Ukrainian assistance, and civilian nuclear technologies). Moreover, in entering industries, China tends to destroy pricing and introduce deflation. While potentially counterproductive regarding profitability and wealth in commercial shipbuilding itself, such “bending the curve” might allow Beijing to continue to afford a massive fleet buildout in ways that earlier shipbuilding powers never managed. If a Chinese juggernaut can truly succeed in changing the structural cost of sea power and naval warfare in a way that places the United States on the wrong end of a costly capabilities competition, the ramifications for the USN will be serious indeed.

In my view, these dynamics and uncertainties make President Trump’s nominee Philip Bilden particularly well-qualified to help manage a USN shipbuilding renaissance as the seventy-sixth secretary of the Navy. The planned fleet revitalization will occur in a complex economic, fiscal, political and diplomatic environment. Moreover, Trump values commercial expertise, and almost certainly will expect a ruthless focus on the financial “bottom line” management of an extensive (and expensive) naval rebuilding. This demands an individual who is accountable and excels under pressure, possesses deep executive management experience and understands the Asia-Pacific region. Mr. Bilden exemplifies these qualities, with a decade of experience as a military intelligence officer and two decades of successfully building companies and consistently achieving strong returns for demanding investors as a Hong Kong–based fund manager. Mr. Bilden’s strong support for USN institutions and deep engagement with the intellectual foundations underpinning them demonstrates his commitment to, and understanding of, the service in which his two sons serve. He now stands ready to help develop and direct American sea power where it is most needed—a fundamentals-focused fleet renewal that is long overdue.

For China today, the sea represents its primary direction of opportunities and threats. Chinese interests and influence are expanding outward, meeting new forces and frictions. Accordingly, the country is determined to become both a leading “maritime power” and a leading “shipbuilding power.” These interrelated goals are clearly prioritized at the highest levels of China’s leadership. Beijing is well on course to achieve these objectives overall, but specific uncertainties remain.

Three key issues to watch over the next decade regarding Chinese military shipbuilding are: (1) Will naval hardware acquisition remain a priority in China? (2) If so, can China overcome the increasing economic headwinds to maintain robust military spending sufficient to sustain a continuing naval buildup? And (3) how effectively will China confront rising production, operations and maintenance costs as many core PLAN vessels approach the middle of their anticipated service lives and new vessels become ever more sophisticated?

Regardless of the ultimate answers to those questions, an historically unprecedented shipbuilding surge has already helped make China “great again,” as a “re-risen” major power with formidable regional military capabilities. Close to home, China enjoys powerful synergies and advantages regarding the sovereignty claims that it pursues along its contested maritime periphery—increasingly in defiance of regional stability and international laws and norms, and supported by precision-strike systems designed to render American intervention risky and challenge American sea control.

In addition to closing the missile deployment and capability gap identified in our volume, I therefore believe that it is now imperative for policymakers to ensure that the United States has enough well-equipped Navy vessels available for use in key operational areas, particularly throughout maritime East Asia. Deploying sufficient numbers would maximize peacetime presence and influence, while deterring a worst-case contingency by demonstrating capacity for overwhelming kinetic operations therein. Lacking sufficient numbers, by contrast, would imperil regional stability and security—and with them, vital U.S. interests. Absent an adequate American naval shipbuilding response, Chinese naval shipbuilding will continue to generate disruptive waves that threaten to swamp the status quo in the vital but vulnerable Asia-Pacific region.