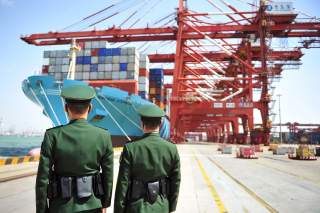 One of the storied elements of World War I is the Christmas truce of 1914. Along the Western Front from Switzerland to the English Channel, forces from the two sides called informal truces, bringing a temporary halt to the fighting. In many places, the two sides exchanged mementoes and rations. In a few cases, there were even football (soccer) matches.

In the ongoing trade clashes between the United States and the People’s Republic of China (PRC), President Donald Trump and President Xi Jinping have called a similar, short-term truce. At the G-20 summit in Argentina, the United States agreed that it would suspend, temporarily, the next iteration of tariffs, scheduled for implementation by January 1. China, meanwhile, made nonspecific promises of substantial increases in purchases of American agricultural, energy, and industrial products.

Most importantly, the two sides agreed to engage in negotiations toward more systemic improvements over the next ninety days. Could this truce mark the end of the burgeoning trade war, and bring tariffs and other obstacles back down?

First, it remains to be seen just what the Chinese commitments will actually entail. According to Larry Kudlow, a key advisor to President Trump, the Chinese have committed to purchasing some $1.2 trillion in additional goods. In addition, China could immediately reduce both tariff and non-tariff barriers to accelerate sales of American goods.

Another element would seem to be an end to PRC opposition to certain corporate deals. For example, Chinese officials indicated that Beijing would likely cease opposing the acquisition of Dutch microchip manufacturer NXP by the American company Qualcomm. Chinese opposition had led to the cancellation of the proposed merger in July (and there is no indication that the end of Chinese opposition would revive the deal).

But nearly a week after the G-20 summit, specifics remain sparse. Past Chinese behavior should serve as a cautionary tale. The 2015 Xi-Obama summit saw the two sides ostensibly reach two agreements. One was that China would not militarize the South China Sea region. The other was that China would cease economic cyber espionage. Three years later, it is quite clear that Beijing’s interpretation of “not militarizing” differs radically from the United States or the rest of the region, as there are now surface-to-air missiles and artillery emplacements, as well as military radars, on a number of Chinese-occupied features. Similarly, while there was a noticeable reduction in cyber economic espionage by the Chinese People’s Liberation Army, it now appears that many of these efforts are sustained by different Chinese entities.

Thus, the lack of specific Chinese commitments, as well as the problems of reconciling what the Chinese mean versus what the American side believes was promised, should limit optimism about the eventual outcome.

Indeed, even the Chinese announcement regarding Qualcomm and NXP highlights that Chinese opposition was due to political, rather than economic, considerations. This bodes ill for the prospect of reaching a long-term solution by the end of the announced ninety days.  Many of the differences between the United States and the PRC that have precipitated the current trade clash are rooted in similar political, rather than economic, factors. Resolving them, then, will involve more than just having China purchase more American goods. Rather, it will require significant changes to Chinese policy—which in turn will likely require more than ninety days, even if Beijing is amenable.

This problem is evident in the charges laid out by the U.S. Trade Representative’s office, for example, in its recent 301 filing. The main American complaints are:

·      Chinese use of joint ventures and other foreign ownership restrictions to compel technology transfer from American companies,

·      Chinese employment of nonmarket pressures to compel American companies to license their technology to Chinese firms on a disadvantageous basis,

At base, these complaints are consistently about the Chinese government’s policies that support acquisition of American technology. But these are neither local whims nor the product of individual bureaucratic satrapies. Instead, as the charges note, these are broad policies, undertaken with central direction, i.e., the policies of the overall Chinese government, as part of their broader trade and industrial policies.

These policies are part of a concerted, longstanding Chinese effort to catch up with the West. Every major Chinese leader since Deng Xiaoping has made it clear that he wants to improve China’s scientific, industrial, and general economic capacities. Deng Xiaoping, for example, authorized “Plan 863,” also known as the “State High-Tech Development Plan,” in 1986 to promote investment and growth in key technology areas such as aerospace, advanced materials, and telecommunications. Hu Jintao made the phrase “indigenous innovation” a hallmark of his leadership era, and authorized the creation of the “Medium and Long-Term Plan for Development of Science and Technology.” Xi Jinping’s “Made in China 2025” is therefore a continuation of longstanding Chinese efforts, rather than a new effort.

Xi himself, at the 19th Party Congress, noted that China by 2020 will have already improved the overall state of its economic and technological base, to the point where it is a “moderately prosperous society.” For the next three decades, his goals include:

·      By 2035, to realize socialist modernization, to make China a major source of innovation and advance its economy to the first tier of nations;

·      By 2049 (the hundredth anniversary of the founding of the PRC), to make China a leading nation in terms of most aspects of national power and global impact (including military capability).

Xi is hardly likely to halt any of the policies implemented in pursuit of these goals. Even if he were inclined to modify them, it is unlikely that the Chinese bureaucracy and state could be shifted in ninety days. If the Chinese are going to maintain their economic and technology development focus, yet actually respect intellectual property and refrain from ferreting out sensitive commercial and other information, then this will require alternative approaches that can hardly be formulated overnight.

Nonetheless, the establishment of this ninety-day truce period offers the hope that both sides, but especially the PRC, will take steps to de-escalate the situation. The Chinese need to recognize that their rapacity will no longer be tolerated—not by the United States, and not by other key partners such as Europe. The growing interest in creating local counterparts to the American Committee on Foreign Investment in the United States (CFIUS) is a reaction to consistent Chinese violations of the norms associated with the international trading system.

The United States, meanwhile, needs to sustain pressure on the Chinese, but not go so far as to precipitate a full-blown trade war. Beijing is able to make major purchases of American agricultural and industrial goods, in part because it is not a market economy. It is therefore in the American interest to push for systemic changes (at a minimum, greater respect for global intellectual property rights), rather than settle for momentary increases in sales to China that ultimately do not shift Chinese policy.

Neither side is likely to be fully satisfied, but real change is necessary if the broader system is to be sustained.

For both sides, it might be helpful to note that the Christmas truce of 1914 occurred before the massive bloodletting at places like Verdun and Ypres brought home the real meaning of “total war.” The consequences were wholly divergent from what each side expected earlier that year, and the ultimate impact remains to be seen, even now a century later. A major trade war between the world’s two largest economies would likely produce just as unpredictable and disruptive an outcome.