Is This China's Next Threat to U.S. National Security? 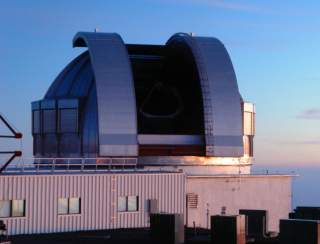 China is close to making a funding deal that could allow it to glean national-security secrets in the Pacific region via one of the Northern Hemisphere’s premier infrared telescopes, according to government documents.

The East Asian Observatory, which is funded by the Chinese Academy of Sciences in conjunction with Japan, South Korea and Taiwan, has expressed interest in increased access to the United Kingdom Infrared Telescope for years. The telescope sits on top of a dormant volcano on Hawaii’s largest island. It is leased by the University of Hawaii and operated under a Scientific Cooperation Agreement led by the University of Arizona. Government documents obtained by the National Interest show that new funding for the telescope must be secured in the next few months, and that the foreign research group has made a tempting offer of $1 million a year for five years in exchange for independent operation of the telescope and its previously collected data archives.

Space experts are concerned that the East Asian Observatory funding offer would allow it to observe the unique details of U.S. space assets. The documents show that the foreign research group would be able to see the electromagnetic waves emitted or received by an antenna, determine whether an antenna is active or not, find the position of artificial satellites, identify cooling and heating rates and spectral signatures, identify an object’s size, and gain access to other potential secrets. Additionally, independent scientists have noted that the there is a conflict of interest surrounding the telescope’s cameras and spectrometers, which are restricted by International Traffic in Arms Regulations.

Meisenzahl declined to confirm whether the university has been in negotiations with the East Asian Observatory. The university has worked with the observatory group in the past, he said, but that relationship is not unique given that the group maintains research relationships with various partners. Meisenzahl said that legal restrictions make it unlikely that a foreign party would be able to gain independent access to the telescope.

“EAO having independent control over it is not possible because there are export control units that they could not have access to,” he said.

Lawmakers are aware of the pending deal and plan to ask the Defense Department to investigate whether it would jeopardize national security, according to a congressional source.

“This is on our radar and we are going to demand answers from the department,” the source said.

The Defense Department and the Defense Advanced Research Projects Agency, also known as DARPA, provided the National Interest with two separate but identical statements after questions about the potential security concern surfaced. Jared Adams, DARPA’s chief of media relations, and U.S. Army Lt. Col. Roger Cabbiness, a Pentagon spokesman, both said that “DARPA is working with other DOD and interagency representatives to determine how best to support continued operations of UKIRT.”

DARPA’s program managers are aware of the national-security implications associated with the funding deal, an agency official told the National Interest.

“There’s concern on the part of DARPA, on the part of the agency, that this type of asset could be leased by any adversary, and there’s a little bit of a trend in that respect, in that you see foreign investment in companies that could provide national-security solutions,” the official said.

The pending deal has long raised concerns among America’s national-security community. Back in 2013, a small group of elite scientists and government advisers, known as the JASON group, expressed their concern about foreign-party access to UKIRT in a letter to aerospace expert Jerry Krassner. Krassner, who was a member of the Air Force Advisory Board between October 1, 2002, and September 3, 2006, confirmed to the National Interest that he received the letter when he was working for a small company in northern Virginia and cognizant of the potential problems associated with the deal.

In the letter, the JASON group calls attention “to potentially serious national security consequences” associated with foreign-party access to the telescope. The infrared detectors used in the UKIRT cameras and spectrometers are restricted by International Traffic and Arms Regulations and export of those capabilities to other countries “is strongly limited in order to avoid transfer of sensitive technologies,” the letter states. Therefore, it would be “highly ironic” to make the telescope readily accessible to foreign parties given that they “could conduct key observation of U.S. space assets and reverse-engineer the infrared arrays,” the letter states.

Export-control components in research agreements are a core competency of a public research university, Meisenzahl said in an email.

“The university knows this and so do organizations like EAO,” he said. “UH is committed to protecting the security interests of the United States.”

Documents show that scientists are concerned that the University of Hawaii is under pressure to accept the East Asian Observatory’s offer. Meisenzahl confirmed to the National Interest that a deal must be finalized by June. He also noted that the university and its partners could instead choose to implement an early decommissioning plan for the telescope and shut it down in lieu of accepting new funding.

UKIRT is already scheduled to be decommissioned in the 2020s, Meisenzahl said.

The United Kingdom Infrared Telescope was once the Pacific Ocean gem of the United Kingdom Science and Technology Facilities Council’s various multidisciplinary research facilities, until the council decided to divest its ownership of the telescope in 2014. After that, it received $5 million in DARPA funds up until fiscal year 2015 as part of the agency’s Orbit Outlook program, which aimed to protect existing commercial and government satellites from space debris and maintain clear paths in critical low-Earth orbit for future space assets, Adams said.