China's 'One Belt One Road' Is a Big Deal. So What Is the Role for Beijing's Military? 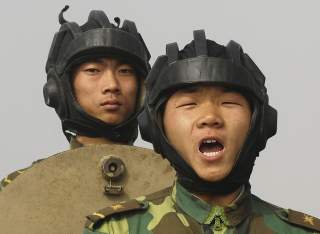 President-elect Donald Trump is set to make his mark on U.S. foreign policy. As a sign of the great anxiety that has taken hold across the Asia-Pacific, Japanese prime minister Shinzo Abe has scurried across the Pacific to be the very first foreign leader to meet the president-elect.

On the other “flank,” all signs point to genuine and even brave conviction in Trump’s determination to turn relations between Washington and Moscow onto a more constructive path. Such a novel approach, which is much needed, will in and of itself have important reverberations across the Asia-Pacific. But what of Trump’s policy toward China? Will it be similarly enlightened and restrained as the new president seeks to focus American energies on energizing economic growth and restraining North Korea’s nuclear ambitions? Or will Trump be seduced by Washington’s multitudes of Asia hardliners who are intent on confronting Beijing at every turn and seem quite prepared to precipitate a military conflict over rocks and reefs?

An argument frequently made by the Beltway’s many hawks on China concerns Beijing’s long-term intentions. For those most skeptical of Beijing’s intentions, the South China Sea is just an appetizer presaging the feast. Chinese leaders, so the argument goes, trample rights at home and are determined to do so in other countries too that might have the misfortune to fall prey to the dragon’s predations. In this conception, which melds ideas from both neoconservatives on the right and neoliberals on the left, China’s “One Belt, One Road” Initiative is a major threat to world order and Western-style governance in the twenty-first century. This edition of Dragon Eye will probe some recent Chinese military writings about the “Maritime Silk Road” (MSR) to help evaluate the relationship between this grand vision and China’s future global military posture.

It must be stated clearly at the outset that such writings are rather rare. While trade, finance and international-relations journals are thick with writings about the “Maritime Silk Road,” Chinese military publications have been much more reticent to comment, preferring to stay with safe and relatively straightforward strategic issues, such as the maritime disputes. That, of course, makes the few writings on the subject that have appeared in military fora all the more important, for example, a full-page editorial published in the military newspaper China Defense News (中国国防报) from May 19, 2015. In an executive summary of the lengthy editorial, the authors state that the purpose of China’s MSR is to “open freedom of navigation, [promote] cooperative security . . . and [build] a new structure of joint development of marine resources.” But the summary explains that the MSR faces numerous challenges, including “increasing great power rivalries, maritime disputes, governance problems and non-traditional security threats.”

On the importance of the MSR strategy for China, the authors observe that 90 percent of China’s external trade passes along maritime shipping lanes. The so-called “Malacca Dilemma” (马六甲困境) arises early in this discussion and the analysis explains that “Despite the building of [various overland] pipelines, that can reduce dependence on the . . . Malacca Strait, there is still no way to replace maritime energy supply.” Shortly thereafter, the authors broach the issue of the United States and its disposition toward MSR: “The United States . . . has long sought to contain China with the ‘island chains strategy.’ As China becomes a maritime great power and energetically pursues the maritime silk road, it will be difficult to avoid an American backlash and even countermeasures.” The assessment continues, “The U.S. ‘rebalance’ strategy and its ‘Indo-Pacific conception’ have objectively strengthened deployments along the Maritime Silk Road.” In the discussion regarding the South China Sea, there is a hint of moderation when the authors conclude that “China could be trapped in a ‘support sovereignty’ or ‘support stability’ dilemma.”

Notably, most of this piece is not about external threats to the MSR, but rather dwells on problems within the related countries themselves. For example, the point is made that countries, such as Myanmar, Pakistan and Thailand really need land-linking infrastructure rather more urgently than they need MSR-related port infrastructure. In the end, the article explains that, "China should and can help certain other countries to realize their own successful development.” The article concludes, “Historically, rivalries surrounding the rise of great powers were accompanied by geopolitical expansion. . . . [But] in the age of globalization, peaceful development and joint development . . . correspond better to historical trends.”

An article in a fall 2015 special issue of Military Digest (军事文摘) devoted to the Belt and Road initiative proved quite a bit more edgy. True, this magazine is not China’s most prestigious military journal, but the author Captain Li Jie (李杰) of the PLA’s Naval Research Institute (NRI) in Beijing is known as a significant player in Chinese naval strategy development, so the article may actually represent a relatively candid glimpse into the Chinese Navy’s view of the MSR.

The Chinese Navy captain comes right to the point in the second paragraph of the essay, pulling no punches, when he asserts: “Externally, [the strategy] responds to the imperative to break the American blockade chokehold [打破美国封锁扼控的需要].” He continues in a similar manner, “The United States is continuously compressing China’s strategic space on the maritime flank, so that the East Sea passages are at great risk.” Likewise, Li points to India as a potential threat to China’s maritime trading routes.

Nor is this military author reticent to discuss economic issues. Li underlines the importance of MSR for China’s economy when he explains, “In China, there has already arisen a production excess, financial excess and capital excess.” Steel and cement are two industries among many that he identifies as requiring a greater export orientation to escape from “production excess” and that can benefit from the MSR. He goes a step further, however, when he advocates that Beijing seek to undermine the U.S. dollar as the world’s reserve trading currency. In another nod to economic nationalism, Li claims that Washington is sowing discord all around China’s borders in order to encourage global capital investment to return to the more stable United States.

The essay uses the term “blockade” (封锁) so many times that one can hardly doubt the author’s point of view, but he does also acknowledge other nontraditional security threats. For example, he notes that of the “world’s five major terror sea area” (世界五大恐怖海域), that four exist along the planned MSR. A particularly interesting passage comes near the end, when Li suggests that ground and air forces can be difficult to deploy in an expeditionary way, but that naval forces can do as they please, because “in international waters . . . there are no limitations at all.” American naval planners may chuckle at Captain Li’s appeal to common U.S. Navy arguments. Likewise, it is not surprising that Li closes the essay with an appeal for China to double down on the building of large and medium-sized aircraft carriers, as well as other expeditionary capabilities, such as amphibious assault ships and oilers.

The two military analyses discussed above do provide some preliminary evidence that the PLA is indeed thinking through its role in China’s grand belt-and-road initiative. While it still seems quite far-fetched to argue that military strategy is a major impulse for the MSR, there is a clear strain of threat perception in each of the two pieces. Indeed, the most important common theme to emerge from this analysis is the existence of powerful rivalry dynamics related to the security dilemma. That is not to say that the Chinese armed forces are above playing the opportunist game that “new roles and missions” related to MSR could entail. In that respect, they may act similarly to the way the U.S. armed forces have warmly embraced the “rebalance.”

But President Trump must judiciously seek to restrain these impulses toward rivalry by striving to ease strategic competition in U.S.-China relations. In particular, Washington should look favorably on the MSR and attempt to guide it in a constructive, inclusive, environmentally sensitive, and demilitarized direction. Indeed, Trump, as a former business tycoon himself, might just see the wisdom of encouraging Americans to look for commercial opportunities within the twenty-first century’s most ambitious building project.