China's Path To Self Destruction Starts in Hong Kong 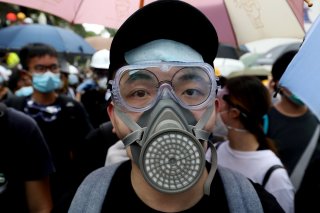 The Washington Post reports that communist China’s Xi Jinping will soon tighten the noose on Hong Kong, effectively ending nearly a quarter-century of the “One country, two systems” compromise which the United Kingdom and the People’s Republic of China negotiated in order to enable Hong Kong’s 1997 return to Chinese sovereignty.

Xi is an ethnic supremacist, an imperialist, and a man antagonistic to basic freedoms. He may seek to crush Hong Kong’s 14-month-old protest movement but he himself was responsible for its outbreak when he directed the Hong Kong government to pass the Fugitive Offenders amendment which would have allowed the extradition of Hong Kong citizens to mainland China.

He may believe his latest move will restore order to Hong Kong and guarantee the Chinese Communist Party’s general security against dissent and criticism, but his actions may very well do the opposite.

Consider an analogy: In 2012, I visited Bahrain with a colleague to meet with the Arab island kingdom’s opposition, both legal and illegal. My visit came a year after the so-called Pearl Monument uprising. That protest movement was rooted in a perfect storm: the Arab Spring, the ten-year anniversary of the National Action Charter, and the security force’s ill-advised decision to fire live ammunition at protestors.

Saudi-led forces helped the Bahraini government restore order but some Saudi authorities thought their help should come at a price. At the time, many Saudis spoke about the idea of transforming the dysfunctional and ineffective Gulf Cooperation Council into a federal arrangement. This was a popular idea in Riyadh but, unsurprisingly, the smaller Gulf states—Oman, Bahrain, the United Arab Emirates, Qatar, and Kuwait—were largely opposed. Put aside the fact that the United Arab Emirates is already a federal state comprising seven emirates. For any other state to join a federal relationship with Saudi Arabia would be to subordinate its autonomy to a relative giant.

At the time, Saudi Arabia was also experiencing unrest in its Eastern Province. Saudi Shi’ites face both sectarian and economic discrimination: Salafi Saudis see the province’s Shi’ite majority as illegitimate and local Shi’ites resent that their province hosts Saudi Arabia’s richest oil fields but receive little benefit for that wealth. The Saudis were far more brutal in the crackdown in the Eastern Province than they were in Bahrain: While Bahraini forces used rubber bullets, Saudi authorities used live ammunition. A senior Bahraini oppositionist leading an illegal group was full of bluster. “I’m not opposed to confederation,” he told me over sweet cardamom tea in his house in a village outside Manama. “If we join with Saudi Arabia, it will be easier for us to help the Shi’ites in the Eastern Province.” In the end, Saudi authorities realized just how much they could lose by expanding their power over the independent emirates, states, and sultanates on their eastern border.

Back to Hong Kong: Xi may want to end the two-system arrangement which has allowed Hong Kong to thrive, but it will be harder to control Hong Kong’s spirit. Rather, by breaking down the border between Hong Kong and China, he may actually expedite the spread of Hong Kong’s dissent. Communist China controls movement, but it cannot quarantine Hong Kong forever. Few in China outside of upper-echelon communist authorities are happy. Most Chinese remain oppressed. Nor is China’s economic future rosy. Decades of the one-child policy have set it on the course for a demographic precipice which will only increase dissent. The real threat from China remains not its rise, but rather its collapse. Freedom is contagious. Xi’s actions against Hong Kong may, in hindsight, appear like treating a chest wound with a band-aid.